Ibadan literally means “between the forest and the plain,” and was once the largest city in sub-Saharan Africa, though more recently it has been overtaken by Lagos in terms of population. It is arguably the largest in terms of area, however, at 128 square kilometers. At four million people and counting, it still retains the feeling of a small town, leading some to deem it “the biggest village in the world.”

It’s known colloquially as “the brown city,” stemming from the rusted corrugated iron roofs of the single and two-story buildings that make up the majority of the city, and the reddish-brown earth it is built on. Ibadan also serves as the capital of Oyo State, and as such, the population is predominantly Yoruba.

Historically, the city was an important centre for the shipping of kola nuts produced in the southwest, which were then transported for the eventual consumption in northern cities like Kano. Today its serves as a similar intermediary for products such as cassava, cocoa, cotton, timber, palm oil, and rubber. It now covers over 400 square kilometers, and whilst less dense than Lagos, and with noticeably more older/colonial buildings, its urban sprawl has significantly outgrown the original seven hills that characterised the city.

There is little in the way of real attractions in Ibadan, nor is there a real centre, though Dugbe contains the greatest concentration of banks and shops. Many resources mention the colonial tower erected in memory of Colonel Ross Bower, first “Resident and Travelling Commissioner” of what was then “Interior Yarubaland.” In reality, the Oyo State’s lackadaisical approach to maintenance and care of its historical sites means the tower has been closed for some time until essential maintenance can be carried out. The tower sits at the end of a poorly maintained road atop one of Ibadan’s seven hills. In recent years, a number of small outdoor churches have colonised the shade beneath the trees on the surrounding hillside, from here the people sing and ring bells in supplication. As ascending the tower is impossible, while low trees obscure the view somewhat, these plaintive worshippers are a sight almost more interesting than the tower itself. It’s far better to visit Mapo Hall instead. Its prominent situation gives better views over the brown rooftops, snaking streets, and markets of the city. On the weekends, it’s also a popular spot for vibrant and melodious Yaruba wedding celebrations.

For those keen on exploring Ibadan’s cultural roots, the National Museum of Unity (off Dick Road) is worth a visit. Entry is N200, and it’s well curated with exhibits from tribes all over Nigeria grouped together in such a way to demonstrate both the differences and similarities between tribes. Exhibits are arranged into four sections; instruments, pottery, carvings, and textiles. It’s an interesting spot for an hour or so, and there are a couple of bar/restaurants in the car park grounds. For those looking for souvenirs, there is also a small curio shop selling wooden carvings and batiks.

For a wider selection of goods, you may also want to try the Craft Centre at 75 Lekan Salami shopping complex at the back of the Adamasingba Stadium. In the 25 years he has run the shop, owner Jimmy has amassed two rooms full of indigenous carvings from all over Nigeria, generally of higher quality than the slightly sparse museum shop. Another interesting cultural excursion is Bode Market in Malete (off Ogunmola Street). It’s one of the largest traditional medicine markets in West Africa with traders from many neighbouring countries making the long journey. The diverse mix of traders sell a plethora of bizarre and macabre wares, ranging from peculiar monkey heads, to chalk and pottery figurines used in traditional “juju” rituals. It’s not for the faint of heart, but gives a good insight into the ways in which traditional culture has moved from the country into the heart of the city in modern Nigeria.

Ibadan is not known for swank or even stylish hotels. There are a couple of high-end establishments that cater to international clientele, but most hotels are utilitarian at best, crumbling at worst. Here are some recommendations that run the gamut and provide a decent experience at a  decent price.

Kakanfo Inn: This stark piece of 70s concrete modernism, which offers 80 rooms across five floors, sits on one side of a quiet street, while the large casino and conference centre lies on the other side of the road. Nothing seems to have changed since it opened, but as long as you are prepared for a slightly 70s-style experience, it is not an unpleasant place to stay. Address: 1 Nihinlola Street, Off Joyce’ B Road, Off M.K.O. Abiola Way (Former Ring Road). Tel: 02 75180001 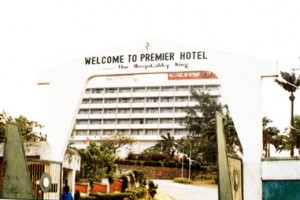 Premier Hotel: Premier is by far the grandest hotel in Ibadan, both in terms of facilities and location. It sits at the crest of Mokola Hill, affording it views across the corrugated iron rooftops of Ibadan. The curving driveway, grand white frontage, mosaic wall and cantilevered entrance all give the guest a sense of arrival. The hotel lobby, like the rest of the hotel, is fairly 70s in both style and decoration, but it’s fairly understated and has stood the test of time relatively well. Premier doesn’t rise to the level an international hotel, nor even to the level of many of the Lagos hotel offerings, but it still warrants its reputation as the best in Ibadan. Address: Mokola Hill, Ibadan North. Tel: 02 200 3274

MicCom Golf Resort: This well-tended golf resort lies about two hours by car from Ibadan, and 30 minutes from the centre of Oshogbo. It was founded in 1997 by a Nigerian golfing family that was passionate about golf, and it continues to cater to well-to-do locals keen to tee off amongst the palms. Though the setting is beautiful, accommodation is fairly basic, and is centered around a single-story block. If you are a golfing fanatic keen for a fix, this is a good spot to come for a night and a day on the links, before returning to the city. Address: Ibokun Road, Ada. Tel: 01-7404002

Aside from hotel restaurants, which are generally of a good standard, Ibadan has very few restaurants where it is possible to dine in a relaxed, semi-formal environment. The majority of eateries are either fast food establishments, or local joints serving variations on pounded yams and stew. 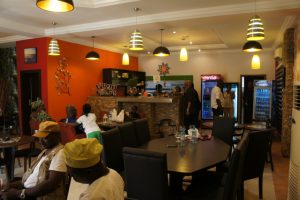 Martha’s Kitchen: Martha’s Kitchen is several years ahead of Ibadan’s other restaurant offerings, and is really the only place where it is possible to go for an upscale lunch or dinner in relative style and comfort. Food is a mix of continental and Nigerian fare. Breakfast includes American, English or Nigerian options, while the lunch/dinner menu is an appetising mix of sandwiches, ribs, steak, pizza or pasta. Address: 129 Railway side Lane. Tel: 08034241370

Whimpy’s: Ibadan can be a hard town in which to find alternatives to Nigerian food. That’s where Whimpy’s comes in – it serves as a great alternative to the cookie-cutter Nigerian and fast food outlets. The food is a mix of continental and Lebanese dishes, and the crowd is mostly expats grabbing a hasty lunch between meetings, with a smattering of local Nigerians along for good measure. The food is excellent, especially with regard to the Lebanese section of the menu, with fattoush, shwarma, hummus and pide featuring heavily. Address: Onirike. Tel: 0810 030 0003

Golden Dragon: One of Ibadan’s few Chinese eateries, Golden Dragon is run by an elderly Chinese lady with a headmistress’s demeanour, who lords over the young Nigerian waiters from her perch at the cash desk. The decor is traditional Chinese, with ornate lamps, painted vases, and fish tanks centered around a small bar area. The food is reasonable, though not served quite hot enough. The Szechuan pork chops are fragrant and gingery, and the bok choi is crunchy and garlicky. Address: Premier Hotel, Mokola-University Road, Ibadan North. Tel: 0704 008 8808 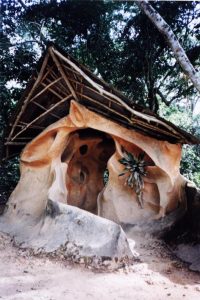 Only a tenth the size of its larger neighbor, Oshogbo lies 100 km to the northeast of Ibadan. It’s sometimes known as the “Dyeing City,” a reference to its history of cotton production, colouring, and creation of Batik style cloth. Those interested in these traditions can find modern examples of dyers at work by asking around. The main reason for Oshogbo’s relative fame for a city its size is “Osun Osogbo,” a 75-acre site of protected forest. The site continues to be a practicing sacred site of pilgrimage for Yarubans. Concrete and stone sculptures emerge from the green canopy in a variety of animalistic, often alien-like forms. Nike Art Gallery (Old Ede Road), run by the same Nike Davies-Okundaye who runs West Africa’s largest art gallery in Lagos. The gallery stocks exceptional examples of contemporary African art and sculpture, much of which is produced by local artists. In August, the Osun Osogbo Festival takes place, bringing thousands of worshippers here from across the world in celebration of the river god Osun. The pinnacle of the festival is the lighting of a 16-branch lamp called “Ina Olojumerindinlogun.”

Ibadan can be reached by air from Abuja via Arik Air, and from Lagos via Associated Aviation (charter) or Overland Airways (scheduled). From other cities in Nigeria, you’ll either have to get there by ground — or get yourself to Abuja or Lagos, and fly in.

From Lagos the journey is about three hours by car or bus, more when traffic is heavy. The expressway that runs between the two cities is not old, but is already deteriorating, which leads to many accidents and delays. If you want to brave it, buses leave from various stations in Lagos for about N600. Private taxis can take you there for about US$50 or less, depending on what you negotiate with your driver. Regional buses also connect Ibadan to other major towns in southwestern Nigeria, such as Abokuta, Ife, and Oyo. Night buses connect with cities in the north and east, such as Kaduna and Benin City.

As with most Nigerian cities, sprawling Ibadan is not a city to discover on foot. Local okadas (motorbike taxis) are the most efficient way to get around, with a 20-minute journey costing around N200-300. Alternatively, local taxis can normally be negotiated for N1,500 per hour. 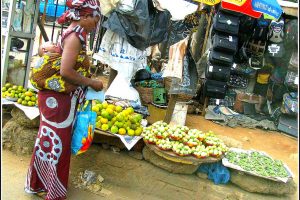 Safety: Ibadan is one of the safest cities in Nigeria, both in terms of street crime (there’s very little) and terrorism (non-existent). Aside from women needing to be careful if walking alone at night, the only other thing to fear is those who may try to separate a naive foreigner from their money. Beware overly friendly Nigerians who may be up to some sort of confidence scam.

Money & tipping: There are numerous ATMs all over the city from which you can withdraw cash. Avoid roadside ATMs, as they are less safe. Cash is recommended (as opposed to credit cards), due to the high incidence of credit card fraud. Tipping is not generally required when taking a taxi, and at nicer restaurants a service charge is normally included in the bill. If you use the services of a guide or private driver for more than a short trip, then a tip would be welcome and expected.

Weather: Ibadan is hot and wet most of the year, with a lull in the rain between November and February, when it can be quite dry and windy.

Health: The CDC recommends that travellers get vaccinated for Hepatitis A, polio, typhoid and yellow fever 4-6 weeks before travelling to Nigeria. Protection against malaria is strongly advised as well. Hepatitis B, meningitis and rabies vaccines are also advised for some travellers.

Police/hospitals: The number for the police station in Ibadan North is 0803-337-3880. The biggest and most well-know hospital is University College Hospital. A list of other hospitals can be found here.