But Ethiopia is not only rich in geographical beauty –- this vast landlocked country is as blessed with man-made treasures as it is with gems designed by Mother Nature. Its long and colorful history has annotated Ethiopia’s striking natural canvas with impressive monuments, from the cathedrals of the capital, to the castles of Gondar, to the rock-hewn churches of Lalibela.

The mini-museum within the Holy Trinity cathedral is ideal for those interested in ecclesiastical artifacts, but for many, snapping photos of the cathedral’s intricate exterior is the highlight. But the cathedral is not just a pretty face; as well as the obvious architectural appeal, the building has an interesting back story. Not only is it the burial spot for those who fought against Italian occupation, it’s also the final resting place for Emperor Haile Selassie and his wife, Empress Menen Asfaw. Also built in the early 20th century, the city’s other cathedral, St George’s, is definitely worth a visit, as much for its remarkable octagonal structure as for its museum showcasing stained glass artwork, war memorabilia and church-related paraphernalia. Both churches are important sites for Rastafari pilgrims. 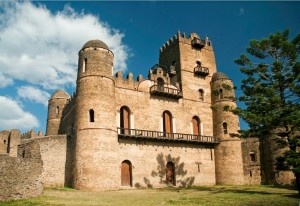 Before the 17th century, Ethiopia’s emperors were travelling monarchs who toured the country, living off the land and setting up temporary tented camps. Then along came Emperor Fasilides. His Royal Enclosure (Fasil Ghebbi) — which was added on to by his successors — marked the country’s first fixed capital in 500 years and is today the main reason that people visit the town of Gondar in north-western Ethiopia. The most striking building in the seven-hectare complex is Fasilides Castle, the well-preserved fortress of Gondar’s first ruler. Surrounding it are the remains of subsequent leaders’ castles, making a trip to this Unesco World Heritage Site a veritable walk through Ethiopia’s royal history. Don’t take the walk alone though — hiring a local guide brings the buildings to life in a way that guidebooks and information plaques cannot.

Lalibela and Tigray: churches carved from the earth 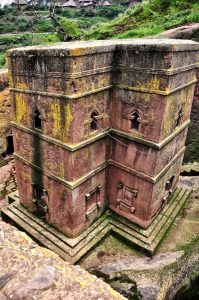 There are over 100 churches carved from the rocks in the dusty northern Tigray region, some perched in difficult-to-reach mountaintops, others conveniently clustered together on easy-to-visit routes. These churches and monasteries were built in inaccessible spots to fend off potential attackers in a time when ransacking churches was a popular pastime in Ethiopia. Some date back 1500 years; others were built as recently as the 15th century. A few are simply add-ons to existing caves, while many were literally carved into the mountainside, and pondering the amazing feat of their construction is a big part of the appeal. That and the challenges of reaching some of the sites, such as Debre Damo, a 6th-century monastery that can only be accessed by clambering up a vertical cliff with nothing more than a weathered rope to assist you. If you’re looking for breathtaking rock-hewn churches in an easy-to access area, head to Lalibela. The small town is awash with Christian churches and monasteries — entrance tickets are valid for five days here, which should give you some idea of how much there is to see. Guides are sometimes optional, sometimes mandatory, but always recommended to shed a little light on the marvels you’re admiring. That said, the churches, particularly those of Lalibela, are a wonder to wander between, and getting lost in the tunnels and passageways that connect the pretty little town’s churches is a fine way to spend an afternoon.

Bahir Dar: the monasteries in the lake

They bear little resemblance to their European counterparts, but Lake Tana’s Christian monasteries are definitely worth a visit, not least for their location, sitting on islands scattered around the lake. The simple, circular buildings sport thatched or tin roofs and reed decorations on the outer walls. The main adornments though, are the iconic paintings found throughout — garish, cartoon-like images depicting tales from the Bible. There’s also a noticeable focus on the darker side of religion, with grinning demonic figures featuring in many of the murals. As well as the allure of the artwork, some of the monasteries have small museums featuring interesting religious memorabilia. Most of the simple structures date back to the 16th and 17th centuries, though they are thought to have been built on the sites of pre-Christian shrines. Renting a boat with a guide is the only way to reach the monasteries and it’s worth noting that many are not open to women.

Hundreds upon hundreds of obelisks are sprinkled throughout this region, ranging from a mere meter to 33m in height. Many mark the sites of subterranean tombs, though there is little information on who is buried here. Aksum’s history is a long and fascinating one, with the myriad ruins dating back anything from 800 to 2000 years. Elaborate tombs outside the city mark the resting places of ancient kings and there are ruins of a 1500-year-old palace once thought to be that of the Queen of Sheba. In the city itself sits the St. Mary of Zion Church — Ethiopia’s most important religious site, built in 1665 on the site of a 4th-century church. The chapel is said to hold the original Ark of the Covenant — the chest that contained the tablets upon which the Ten Commandments were chiseled. The chapel is completely off-limits though, making the ark’s presence just another of Aksum’s legends. You’ll find further monuments, tombs and monasteries — including Yeha, considered the birthplace of Ethiopian civilization, scattered around the region, making this any archaeologist or history buff’s dream destination.