Cape Town seems like an unlikely place to go scuba diving, considering that it’s got cold, shark-infested, choppy waters. Furthermore, there are plenty of other places in South Africa (and the world) to dive which are considered much less hassle — and warmer.

But for those in the know, Cape Town is an incredible scuba diving location. Yes, you might require a thicker wet suit, but there are plenty of dive spots that boast kelp forests, colourful coral, interesting sea life and various shipwrecks. Plus, you have the choice of two oceans (Cape Town is where the Atlantic meets the Indian Ocean), the diving here is less crowded than at other popular dive spots, and it’s cheap.

So if you’re considering coming to scuba dive in The Mother City, here are a few essential tips you should know.

Why Scuba Dive in Cape Town? 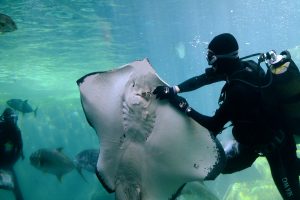 As one of the main reasons to dive in Cape Town is its affordability. Tourists from America, Europe and Australia will find great value for money with South Africa’s weak currency. Companies offer competitive rates for both scuba diving excursions and scuba certifications. You can pick up some great deals including a shore dive for as little as US$60, or a boat dive for US$65, which includes full gear and a filled cylinder. Certifications can cost as little as US$230, depending on what you are looking for.

Another awesome thing about Cape Town is that it is a year-round dive spot, even though winter is considered the best time to dive. If you are wanting to upgrade your current dive certification or want to learn to scuba dive, almost all dive schools have friendly staff and instructors, are completely professional and are well equipped and experienced. Whether you’re a beginner or an advanced open water diver, the city has numerous underwater sights at various depths.

Cape Town is a cold-water dive spot which requires divers to wear a wet suit with a hood and booties. Water temperatures in the city range from a frigid 8 C (46 F) to a balmy 25 C (77 F). For those used to diving in warmer water, this might seem ridiculously cold, but the chill can be kept at bay with the correct gear. Many Capetonians also believe that the water in False Bay is warmer than that along the Atlantic seaboard, but you can be the judge of that.

Cape Town has various places you can get certified, with most scuba schools in and around the city offering both SSI and PADI courses and certifications at all levels. Most of these companies are based in the city and take you out on dives in both the Atlantic and False Bay (Indian Ocean).

If you prefer the (slightly) warmer waters of the Indian Ocean, take the one-hour drive to Simonstown and visit Pisces Divers, who offer training and dives in this majestic seaside town. You can also head out to Gordons Bay where you’ll find Indigo Scuba. If you prefer something closer to the city you can visit the Two Oceans Aquarium on the V&A Waterfront, where you’ll find Iain’s Scuba School. Other schools in the city include Into The Blue Scuba Dive Centre in Sea Point, and Table Bay Diving, also at the V&A Waterfront. Both do their training courses in the colder Atlantic Ocean.

Unlike tropical water dives, you’ll need a few extra pieces of dive attire when diving in Cape Town. Due to the cold water, a 5mm to 8mm wetsuit with a hood and booties is required, as well as a steel scuba tank. Gear is generally supplied by dive companies, and is included in the cost.

With cheap rates, amazing dive spots and the opportunity to dive with sharks and seals, Cape Town should be your next scuba diving destination. The conditions are almost always good no matter what time of the year, and there is always a scuba dive company willing to take you out to sea!

Guide To Diving And Snorkeling In Central Mozambique

The Best Places For Diving In Cape Verde

This article was originally published on September 30, 2014.