Mozambique sees fewer tourists than other Indian Ocean destinations, and as such makes a great place to swim, dive and snorkel away from the crowds you’ll encounter in Tanzania or Kenya. While the capital Maputo doesn’t offer much in the way of watersports, you need only hop across the bay to the island of Inhaca for a day of snorkelling. Further afield, Ponta d’Ouro in the far south offers both surfing and diving, while the reefs in central Mozambique at Tofo, Vilanculos and the Bazaruto archipelago are spectacular. Here’s our guide to the best spots for diving and snorkeling in central Mozambique.

Vilanculos and the Bazaruto archipelago

If you’re looking for a beautiful spot that’s dive-able every day, come rain or sunshine, look no further than Two Mile Reef, a stunning reef that’s a short speedboat ride away from Bazaruto or Benguerra Island in central Mozambique. Many visitors say that Two Mile Reef affords better diving and snorkelling experiences than those on offer in Egypt, Thailand or Malaysia. It’s also one of the rare reefs suitable for everyone, from beginner kids to advanced dive instructors. 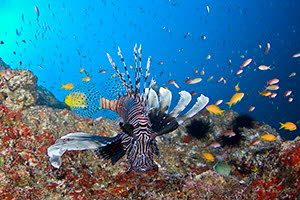 On Two Mile Reef anything is possible,” dive instructor Vouter, who works at Azura on Benguerra Island, told us. “In the winter you might see whales, and there are a lot of turtles and devil rays – which look like baby manta rays, and like to travel in big schools of ten to 25.”

There are also angelfish — look out for the youngsters with their psychedelic markings — and unusual specimens like sea apples, something of a cross between coral and fish, with yellow and purple fingers with which they catch plankton. Surgeon fish, bluestreak cleaners, batfish and tuna are also a common sight. Whale sharks turn up at the reef from November to February, but they can be hard to spot and are typically shy around boats. Two-meter long gray reef sharks — beautiful but not dangerous — are more common. You might also spot gorgeous thistle corals. More experienced divers will want to check out the deeper caves and square linear rocks at Two Mile Reef, the reef at Santa Carolina Island, or head to Five Mile Reef which has a depth of between 20 and 25 meters. Even further afield is San Sebastian Reef, with its depth and strong currents; that’s one for advanced divers only.

Most hotels and lodges in Vilanculos and the Bazaruto archipelago can organize diving or snorkelling trips, but I recommend using an expert provider. I love the dive school at Azura Retreat on Benguerra Island, equipped with its own plunge pool, but you’ll need to be a resident at the lodge to use it. If you’re staying in Vilanculos on the mainland, Odyssea Dive is a firm favorite; they can organize personally-tailored dives, with trips out to Two Mile Reef starting at 3100 Mets per person, and rising to 14,400 Mets for full Open Water certification. Owner Denis also arranges snorkelling trips to Two Mile Reef. Those cost 2000 Mets in the low season and 2300 Mets during the high season. National park fees cost an additional 400 Mets per person, and all day trips include a healthy packed lunch. 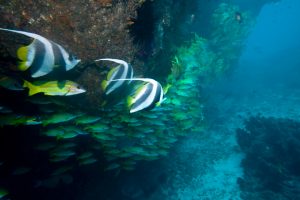 The laid-back, hippy resort town of Tofo — famous for its large whale shark population — lies about eight hours’ drive north of Maputo, and is home to excellent snorkelling and diving. Lodges in Tofo generally offer affordable accommodation along the ocean front, and it’s a great spot to kick back and shake away stress. At 25km away from the regional capital of Inhambane, Tofo is popular with day-trippers, as well as with weekenders from Maputo. It’s calm, almost soporific vibe makes it a good place to relax, watch fishermen with their graceful dhows, shop at the market for fresh crab and shrimp, and lie back on the sands of nearby Tofinho beach.

There are at least 16 great dive and snorkelling spots in Tofo, all creatively named, such as the Chamber of Secrets, Mike’s Cupboard and Giant’s Castle. For accommodation, Paradise Dunes has great cottages for groups and families right on the beach, from 970 South African rand. Tofo Beach Backpackers makes a good budget option, with private rooms from 1000 Mets and dorm beds from 300 Mets per person. It’s close to the beach and Diversity Scuba.

There are two main, long-running diving schools in Tofo: Tofo Scuba and Diversity Scuba, although others are popping up all the time — mainly South African owned — and it’s always worth checking out the competition. Tofo Scuba offers two sea dives for 9,200 Mets per person, and has an extensive menu including options such as search and rescue dive training as well as snorkelling trips, from the price of 2000 Mets. Diversity Scuba offers similarly-priced trips, as well as two-hour ocean safari trips to snorkel with whale sharks and spot humpback whales (from November to May). It’s common to spot as many as 30 whale sharks at one time.