Selous Game Reserve in Tanzania, which covers over 40,000km², is the largest game reserve in Africa (South Africa’s Kruger National Park is less than half its size). It is so vast that getting an accurate count of the wildlife is an impossibility. The lodges here are few and far between, dotted over the huge expanse.

Azura Selous is a five-star lodge hidden in the southernmost part of the park, on the banks of the Ruaha River. Each luxury tent opens out onto uninterrupted views of the hippo-flecked river and lush grasslands that stretch beyond the grander parts of the imagination. 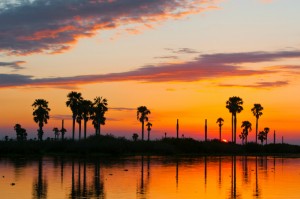 This area of the Selous is known for its abundance of elephants, hippos, buffaloes, lions, hyenas, zebras, giraffes, wildebeest and wild dogs. In fact, you’re more likely to see wild dogs here than in most other reserves in Africa.

The sheer magnitude of the area means that sightings are not guaranteed. This may be a problem for some, as many first-time safari goers yearn to see the Big Five with immediate effect. And whilst this is something that is possible at other reserves, that’s not what Selous is about.

On arrival each group is assigned a guide for the duration of their stay; an expert in tracking, animal behaviour and, of course, the region. Joseph Kayoka was to be our guide, a man who I would describe as the personification of abundance: his grandiose smile, remarkable insight and unyielding determination made him memorable to say the least. That, and his wicked sense of humour. 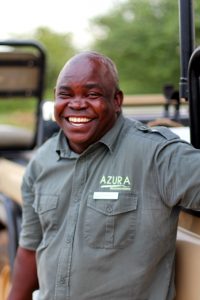 The safaris here are designed around what each group would most like to see, with each guide doing his level best to grant those wishes. Joseph told us that a lioness had recently given birth to three cubs, now just three months old, and that they were in the vicinity. Only a few of the journos, myself excluded, had ever seen such small cubs in the wild and the prospect was irresistible. Joseph explained that they would be hard to find and that we’d need to do some serious off-road tracking — a prospect none of us were opposed to.

Soon after embarking on our first drive, we encountered an injured hippo. It had been attacked by lions; it bore scratch and bite marks all along its back. Joseph explained how the lions go for the spinal cord to paralyze larger animals and, in the case of hippos, often disembowel them and eat their faces as this allows for a faster kill. This one had survived, but he’d taken a serious beating.

The game drives here are as much about learning as they are about sightings; Joseph sewed his infinite knowledge harmoniously into each adventure. He took the time to pause, to reveal and share nature’s marvels with us, and his ability to spot and name the tiniest and most obscure birds from miles away was astonishing. We went off-road into river beds, over hills, and between thickets of thorns and bushes where other vehicles clearly hadn’t been for months, if at all. 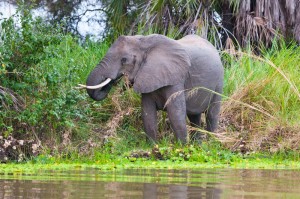 The landscape during the early months of the year is lush and thick; the grasslands are alive, a canvas of greens so iridescent I began to question the mushrooms I’d eaten at breakfast. It’s so different to South Africa. Baobabs tower like giants over open plains of grass so flush with the red earth that you’d wished you’d brought a cricket bat; thorn bushes whistle in the breeze and lofty marula trees harbour languorous leopards… You feel as much the observed as you do the observer. It’s magical.

Early morning game drives were rewarded with sightings of a spotted hyena ravaging the placenta of newly born impala, herds of Burchell’s zebra, Nyasa wildebeest, Masai giraffe, an albino hippo, baboons, and too many rare and enigmatic birds to mention. We would stop for enchanting breakfasts on the river bank, in the afternoons we’d enjoy sundowners whilst trying our hand at tiger fishing, or idly drink ice-cold champagne as we watched the crocs float by. And, as if that wasn’t enough, at the end of each day you’re met with the most astonishing dinners in the midst of nowhere under a canopy of stars. The night skies here are dazzling – you realise your insignificance and are reminded of the beauty of what it means to stop, to slow down, to look and to listen, really listen, to the world around you. 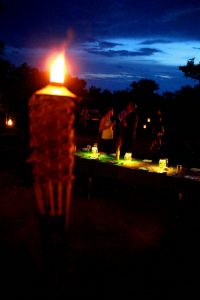 As the days rolled by, we continued to track the lioness and her cubs, engaging in the most resplendent adventures along the way. Tracking vultures that might point the way to kills, following fleeing baboons escaping close encounters with leopard and scrutinizing impalas’ behaviour for clues as to where the great hunters might be. We soon discovered the tracks of a pride of lions that were on the hunt of a herd of buffalo and, to our delight, the pride had been joined by three sets of tiny paws prints.

We followed the lions’ tracks; each grouping taking us further into the story of a hunt that Joseph would masterfully articulate; sliding hooves, back and forth, panic in the sand, circling and dividing as the pride tried to surround the herd in search of the weakest and youngest. The strides got longer as the animals ran. Scattered, fractured and then…they stopped. There was a set of tracks that had turned around and then disappeared. Nothing further along the road, nothing to follow except instinct as the herd of buffalo ventured into the grassland and the lions followed in pursuit. Thus we ventured into the unknown, once again thundering over flowing rivers and through willowing trees, up steep hills and into deep crevices, until we received word of a miraculous sighting. Not lions, but just as spectacular… A pack of wild dogs.

We had to make the call: the rains were rolling in once again, fast diminishing our chances of finding the lion cubs. So we raced towards the wild dogs, skidding over the slush, speeding over saturated marshes, Joseph in complete control of the roller-coaster ride, nimbly avoiding getting stuck in the mud. 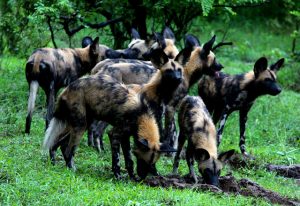 And suddenly, as if by magic…we found them – the whole pack – huddled together beneath two trees, waiting out the rain. The juveniles cavorted next to the stream and the Alpha male – a sage looking character with one eye – lay soundlessly still, assessing us and the situation. What a wonder. We sat in silence, absorbing our surroundings, so close to the pack you could almost touch them. To Joseph the wild dog are supreme in the hunting world; in a whisper he told us about the wonder of how they hunt, “They can devour an impala in five minutes. They feed while their prey is still alive, and within moments they’re off in search of their next kill. They work with such stealth and synchronization that 80% of their hunts end in a kill. It’s masterful.”

The alpha male rose and, with that, the rest of the pack. They shook off the rain, yawned and stretched their limbs, glanced back at us for a fleeting moment as if to say “catch us if you can”, and in an instant, they were gone.

A slow drive toward sunset at another exquisite watering hole had Joseph retelling stories of wild dog pursuits, an unforgettable moment of a crocodile fighting a lion over a waterbuck and of once seeing a buffalo kill a man. I was reminded again of my insignificance, a grain of sand in a wild and untamed wilderness. There’s a Swahili saying “Kupotea njia ndio kujuwa njia”, it means “to lose the way is to find it.” You will lose yourself in the Selous and will treasure every moment.

The Best Of The West: A Traveller’s Guide To Western Tanzania
15 Incredible Wilderness Destinations In Tanzania
Guide to Tanzania’s Southern Safari Circuit