With its beautiful old architecture, shiny shopping streets, ribbons of bougainvillea, scent of jasmine in the air, ancient mosques, old cliches and new beginnings, Tunis is hard to define. Since the 2011 revolution, the city has been in a state of change: the crisis shifted perceptions, political viewpoints, culture and industry. I’ve visited several times since the revolution swept through the country, and each visit has been different. I’ve flown into Tunis, and I’ve left by overnight ferry to France. I’ve stayed in hotels in the commercial center, and at lovely boutique guesthouses deep inside the medina. I’ve sipped mint tea on corners, chatted to traditional craftsmen, and been out exploring the nightlife with artists and writers. And I’ve loved every minute of it. There’s just something about this city — its state of flux, its mix of old and new — that fascinates me. 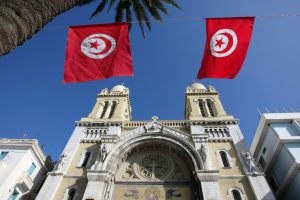 The first time I visited Tunis, I liked it most for its food; its traditional breakfasts – honey and cottage cheese, served with Tunisian pancakes – and its fish suppers. Then I discovered the architecture, the history, the hangovers from French-era Tunisia – for better and for worse – and the complex social structure and interactions that make getting to know this city so interesting. Tunis is a very liveable city; there are the white sand beaches of La Marsa to the fully-stocked commercial center, and there are easy day trips to ancient ruins, beautiful seaside towns like Sidi Bou Said.

In contrast to the glitzy shopping streets and wide boulevards, Tunis’ medina is still steeped in history and tradition. With its narrow, cobbled labyrinths and splendid mosques and scent of sandlewood hanging heavy in the air, the medina dates back to the 13th century and is a UNESCO heritage site. Bougainvillea, blooming in pink and red and white, frames ancient doorways and carts of sugary delights are parked on corners. The Mosque of the Kasbah, one of the country’s most famous religious sites, is within the medina. It was built between 1231 and 1235, and is crowned with a gold coronet, marble columns and a beautiful minaret. 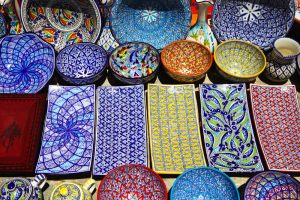 Then there’s Rue Sidi Ben Arous, one of my favorite streets in all of North Africa. It has been transformed under a regeneration scheme; its wooden doors splashed with colorful paint and its courtyard houses, known locally as dars, becoming ice cream bars, boutique hotels and cafes. La Parenthese, for instance, is a street-level cafe with an ancient byzantine column on display inside the ladies’ room. The souk that sits within the walls of the medina is a treasure trove, if you know where to look: amid the tourist souvenirs, there are stalls selling vials of rose water, orange blossom perfume, fine leatherwork and traditional felt hats for men, known as chechias. At the souk des parfumiers, if you know where to look – or better yet, take a local with you – you’ll get the best deals (some of the perfumes have been watered down, or aren’t made with the purer oils.) 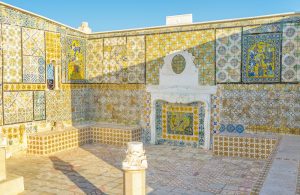 Even amid the hassle, there’s beauty to be found. While wandering the medina, a tout talked me into stepping inside Ed Dar, a Tunisian rug store. It was one of many inside the souk, ostensibly no different from the others, with its deep red rugs hanging outside. I listened, wearily, to the salesman’s spiel, before climbing the stairs alongside other tourists to the next level, where, I imagined, yet more rugs awaited. Instead, the salesman pushed open the door to grant access to a stunning terrace, lined with Tunis’ trademark white-and-blue ceramic tiles. We had one of the best views out over the medina, and the soft, cool breeze washed away the heat of the day. 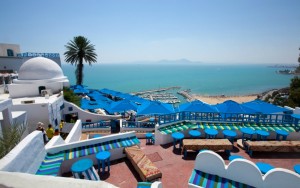 The view from a cafe in Sidi Bou Said, Tunis (Shutterstock)

My first trip to Tunis was undoubtedly my favorite. It was 2011, and I had been covering the Arab Spring in Egypt, Libya and Tunisia. As the revolution ended, I spent a few days with friends in La Marsa, staying in a beautiful shabby-chic apartmet overlooking the Mediterranean. With its old wooden chairs, mismatched rugs and sanded, cornflower blue doors, it was the perfect place to catch my breath and reflect on the turmoil that was sweeping through the region at the time. Before I left, some friends and I went dancing at Le Boeuf sur le Toit, one of the city’s most atmospheric clubs, with several rooms playing different kinds of music – rock, salsa, house. That night, it felt as if all of Tunis was celebrating. We headed to the rock room; a party in a long, skinny hall, lit by candles and the glow of cigarettes. Beside us, a couple in their seventies danced tango by the stone wall, and students sucked on cold, bottled beers. As the last song played, the bass was deepened by the sound of hundreds of forks tapping against the ceramic lampshades, feet dancing on tables, and from somewhere, the smell of jasmine permeating the air.

Photo Essay: A Tour Through The Stunning Streets Of Tunis
15 Essential Things To Do In Tunis (And Surrounds)
VIDEO: A Guide To Tunis, Tunisia