Founded almost 4000 years ago, Tunis is said to be one of the most historic (and nicest) cities in North Africa. With only around 2.5 million people in the greater metro area, the city proper doesn’t have the congested feel of comparable cities in Egypt or Algeria. While it may not have as much history as Cairo or as many sights as Marrakech, there is still plenty to see and do in this cosmopolitan North African capital — or within a short drive. 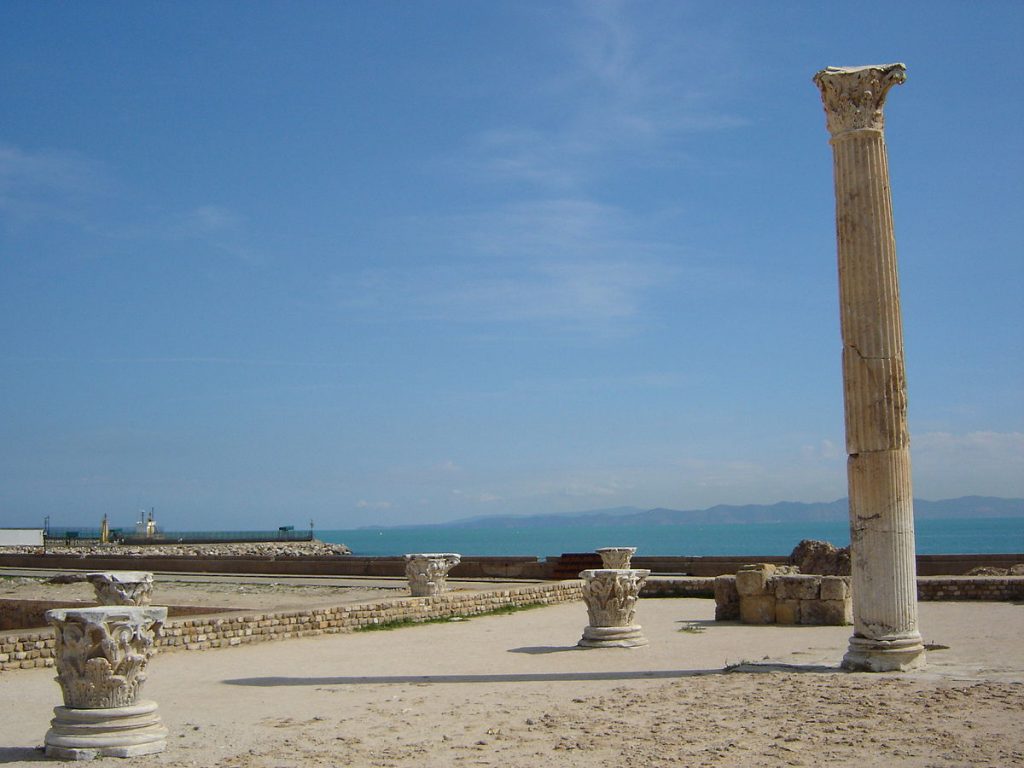 1) Walk back through time in Carthage

The top attraction and probably most interesting thing in Tunis, Carthage has stood for thousands of years. Once in control of large swaths of North Africa and the Mediterranean, the Cartheginian Empire fell into decline after it was destroyed by Rome during the Punic Wars. Famed for Hannibal’s legendary overland attack on Rome leading war elephants through the Alps, the ruins of this vast ancient power still stand in stark tribute to the city-state’s former splendor. 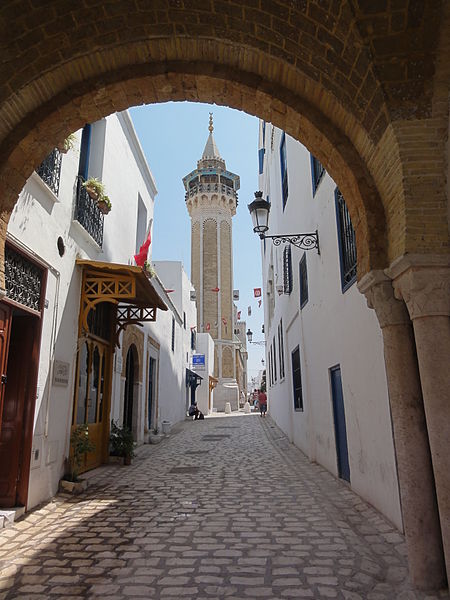 2) Get lost in the Tunis medina

One of the best things about North Africa’s Arab influence is the presence of medinas. The word itself translates to city or town in Arabic and most medinas are tightly spaced, walled in sections of the oldest parts of a place. Tunis’ is no different and you can spend hours or days sipping tea in quaint cafes or diving headfirst into antique shops for treasures from centuries past. 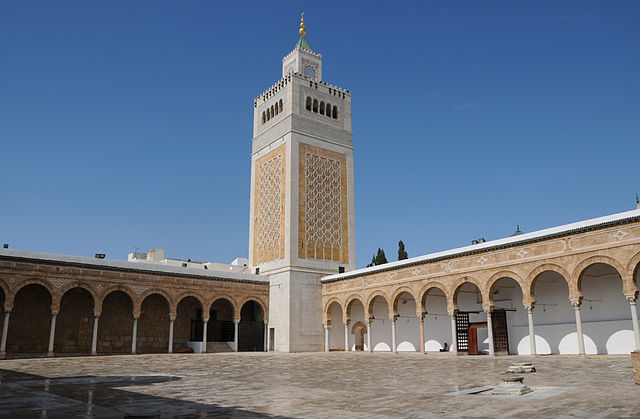 3) Learn your history at Zaytuna mosque

This massive mosque is the oldest in Tunis and covers over one acre of land. Originally built in the 8th century, parts have been reconstructed over time. The 160 columns you’ll see on the premises were originally transported from Carthage and the mosque itself was one of the first centers of Islamic learning. 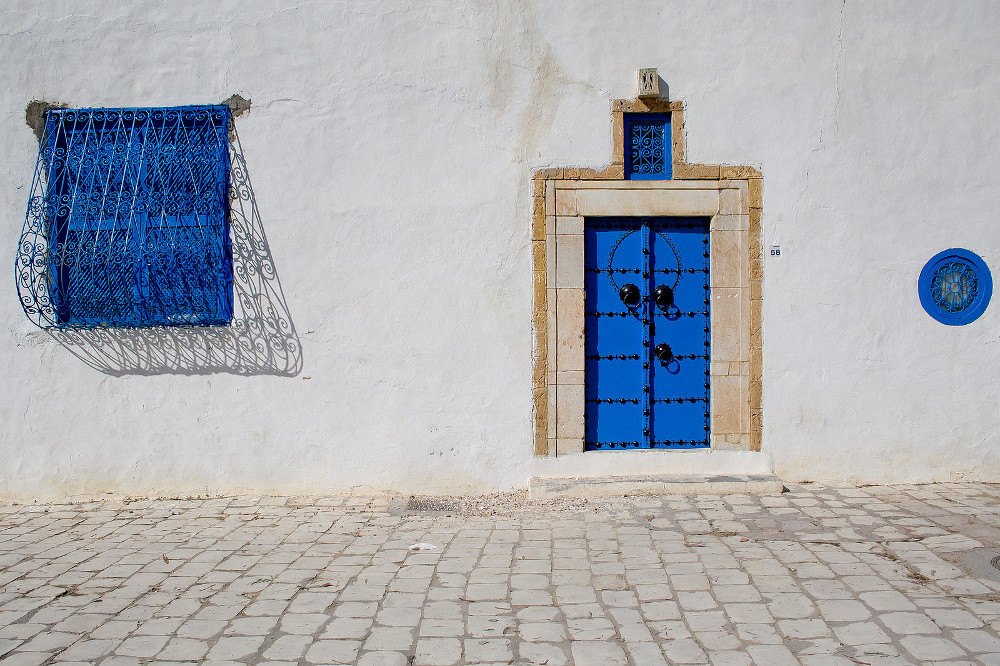 The charming seaside suburb of Sidi Bou Said is a mere 20 kilometers (12 mi) from Tunis’ old center. Known as the blue and white town, its buildings are painted in remarkable shades of said colors, similar to Chefchaouen in Morocco. A short light rail or bus ride away, Sidi Bou Said is the perfect place to escape the city feel if Tunis has got you cramped up in its bustling day to day activities. 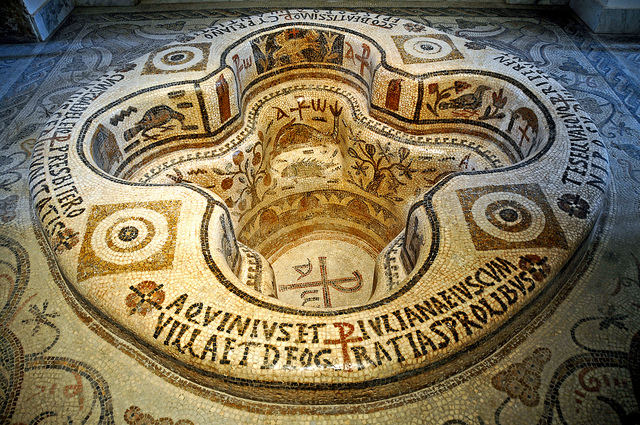 5) Marvel at the ancients in the Bardo Museum

The Bardo Museum is consistently ranked as one of the top sites in Tunis and for good reason, too. Constructed in the 13th century residence of an Ottoman bey (local ruler or administrator), the building itself is impressive enough. Once inside though, and you’ll be amazed at the extensive and fascinating collection of Roman, Greek, Phoenician, Ottoman, and Arab works, in particular, its breathtaking mosaics dating back thousands of years. 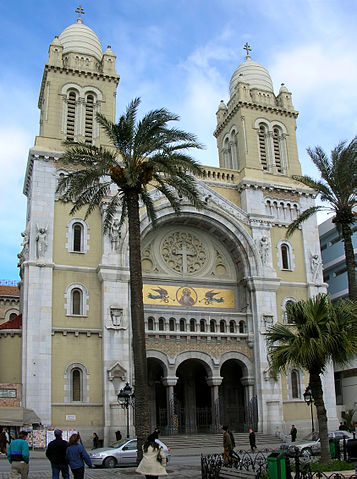 One of the most impressive architectural masterpieces in the capital, the Cathedral of St. Vincent de Paul is a late 19th century Roman Catholic cathedral dedicated to the patron saint of charity. Opening on Christmas Day, 1897, it incorporates Moorish revival, Neo-Byzantine, and Gothic styles and is still an active church to this day. 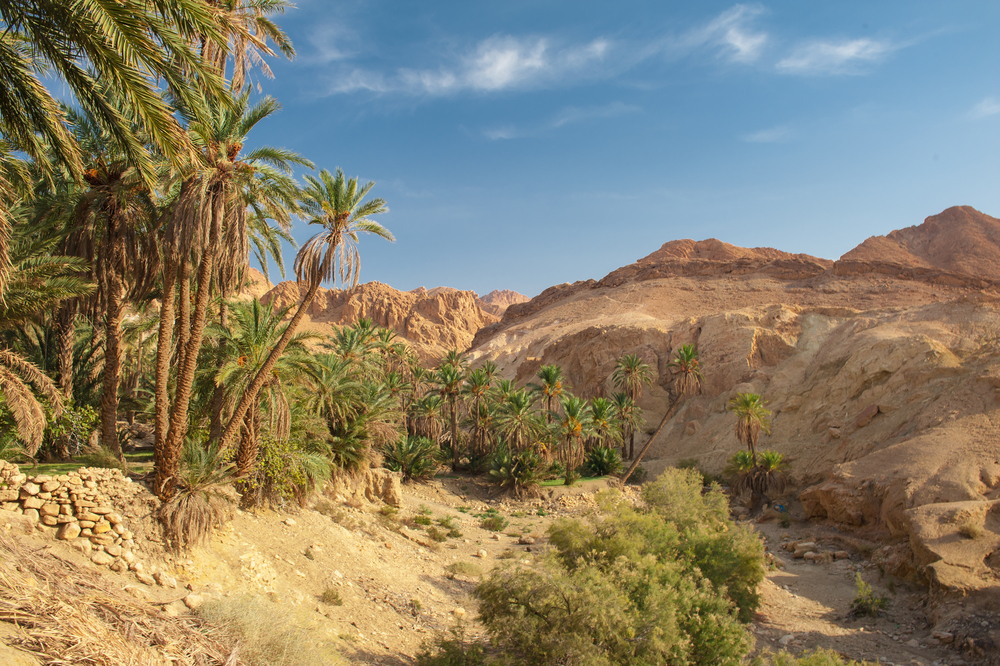 7) Get back to nature in the Kroumerie Mountains

Located a scant 200 kilometers (120 mi) west of Tunis, the Kroumerie Mountains make a great day trip if you want to explore some more of Tunisia that’s not all beautiful Mediterranean coastline. The UNESCO World Heritage Sites of Dougga and Bulla Regia are excellently preserved Roman ruins set against the backdrop of this mountain and forest covered landscape. 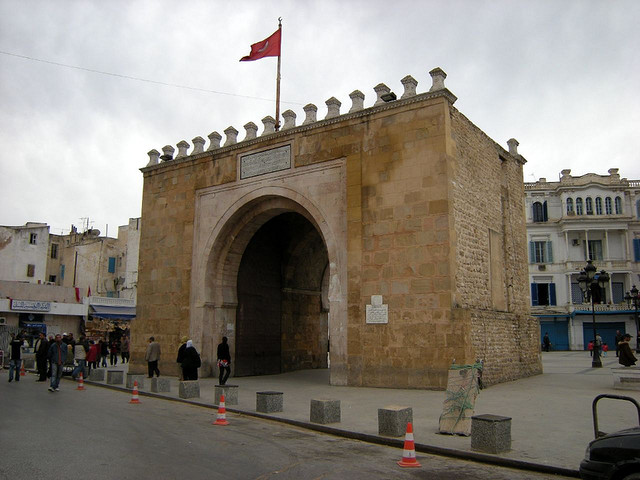 8) March into the sea at the Bab el Bahr

Known as the Sea Gate in English and Porte de France in French, the Bab el Bahr is the old city gate (one of several) that separates the ‘ville nouvelle’ from the old part of town. The impressive stone archway was completed in 1848 while still under Ottoman administration. 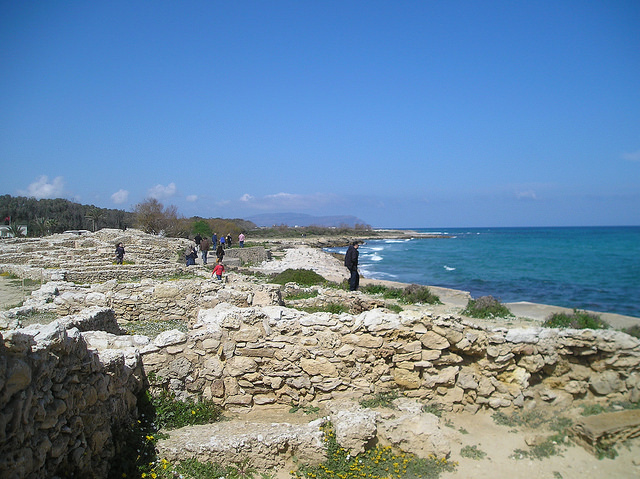 About an hour outside of Tunis in Cape Bon, the peninsula that juts out into the Mediterranean lay the ruins of Kerkouane, a Phoenician city that was abandoned during the First Punic War (around 250 BCE). While not as impressive as Carthage, it makes a great outing from the capital and a good way to see the surrounding countryside, especially if you’re into history. 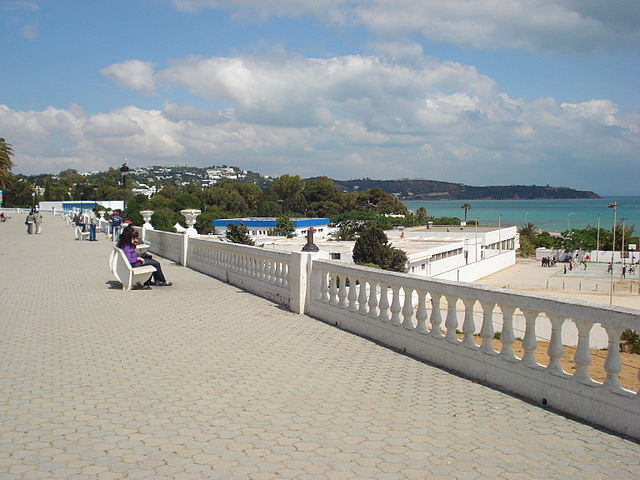 Another beautiful seaside town, La Marsa is located a quick 20 minute train ride from Tunis. While there isn’t a whole lot to do or notable sites, it is a relaxing place with plenty of good restaurants, old cobblestoned streets, and azure colored waters. 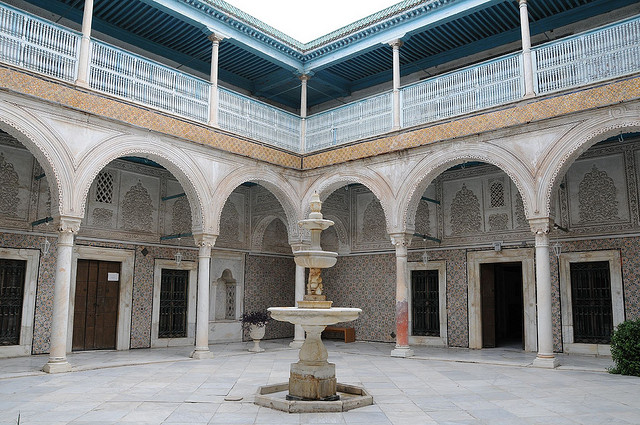 The Dar Ben Abdullah is Tunis’ other great museum set in an Ottoman palace dating to the 1700s. A folk museum in the old medina, Dar Ben Abdullah takes a deeper look at the lives of the merchants and traders that inhabited Tunisia through the Ottoman era. Recent reports from travelers have said that it’s under renovations as of 2014.

If you’ve never been to a traditional hammam or public bathhouse, you’re in for a treat (provided you’re comfortable with having someone scrub you down completely in your undergarments). Popular throughout the greater Middle East, Tunis has several ones that date back hundreds of years. While it may be initially uncomfortable stripping down in front of strangers, you’ll emerge feeling reborn and cleaner than you’ve ever felt in your life. 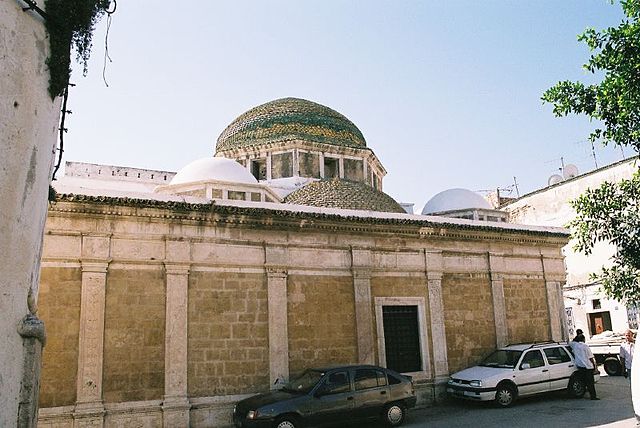 13) Pay your respects at Tourbet el-Bey

The green tiled dome of this impressive mausoleum was constructed in the late 18th century during the reign of Ali Pasha II. Ornately tiled Islamic facades decorate the interior and the surrounding cemetery and tombs hold the remains of many important city leaders and dignitaries from the various centuries. 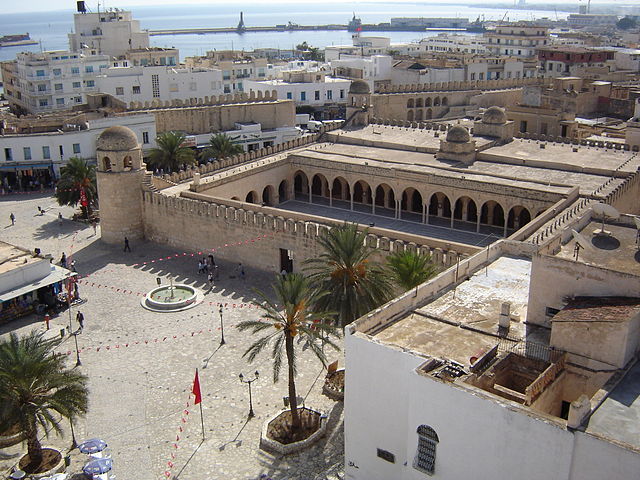 Less than 90 minutes south of Tunis in the city of Sousse are 5.5 kilometers (3 miles) of underground passageways, tunnels, and caverns holding the remains of thousands of Tunisian Christian remains from over 1500 years ago. Only 100 meters (300 feet) is open to the public, but it’s still an interesting way to beat the heat and learn about the fascinating history of early Tunisia and Christianity.

Espace Diwan is a small but much loved shop in Tunis’ medina. Diwan is the place to go for gifts or to take home an authentic piece of Tunisia. Books, postcards, antique tiles, historic photos and other curios can all be found here to make sure you never forget this ancient and memorable city.

This article was originally published on December 31, 2014.