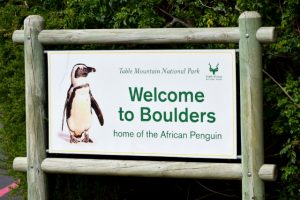 Located in Simon’s Town, South Africa, Boulders Beach is home to a large colony of African penguins (humorously known as “jackass penguins” due to the sound they make), one of the few that’s still left on the continent. Boulder Beach located within the famous Table Mountain National Park and consists of three different beaches, three boardwalks, and a penguin viewing area. Every year, thousands of tourists flock to the area to watch the penguins waddle through the white sand, chase away seagulls, and splash around in the ocean. But these penguins aren’t just there to entertain tourists — they are there so they can survive.

The African penguins at Boulders Beach are currently listed as an endangered species and their numbers have declined steeply over the years. In the 1930s, there were around one million African penguins with several colonies throughout southern Africa. Flash forward to 2015, and there are only around 100,000 left, with about 25,000 breeding pairs, a massive decline in population numbers. According to South Africa’s Department of Environmental Affairs, over 30,000 pairs were lost between 2004-2015, with large losses at Robben Island and Dassen Island. 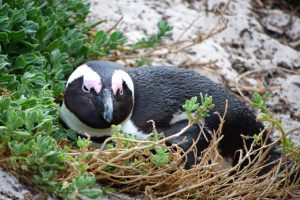 To stop the decline, the penguin colony at Boulders Beach was created in 1983 to protect them, but even at the beach, numbers are declining. There were close to 4,000 birds a decade ago, with just over 2,000 now. Another colony was created further down the coast in Betty’s Bay, but it’s less accessible to tourists. However, if you have the time, it’s worth checking out as well.

As you might have guessed, humans are the biggest threat to the survival of these penguins. While I was there, some not-so-bright tourists were yelling at the penguins and throwing stuff at them to try to get their attention so they could get better pictures. I had to intervene and remind them that they shouldn’t be doing that, and told them to go away. But the real threat doesn’t come from the occasional stupid tourist — it’s the loss of their habitat and food sources that has caused them to be squeezed into such a small place to begin with.

It’s thought that climate change, over fishing, and a fluctuation in the sardine and anchovy population from the coast has caused the sharp decline in penguin numbers. The birds are forced to swim further to catch fish, abandon their babies, and are eventually weakened to the point of starvation. Many of the local fishing grounds have also been declared off limits to help save the penguins. Since anchovies and sardines are the biggest part of the South African fishing industry, scientists believe that reducing the areas that people are allowed to fish will boost the populations of the penguins. 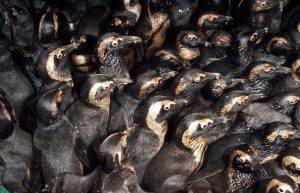 There have been several massive oil spills over the years as well, further affecting the penguin population. In 1994, the MV Apollo Sea sank near Cape Town and killed at least 5,000 African penguins. In 2000, the MV Treasure ran onto the ground and covered 20,000 penguins in oil, killing over 2,000 of them. Yet another oil spill in 2013 affected the again. As for the penguins at Boulders Beach, they remain guarded from oil spills in their small little area, but getting enough food as they swim out in the ocean will probably continue to be a problem until fish populations recover.

In the meantime, tourists can see them in their protected habitat. Visitors can easily make the drive from Cape Town to see them anytime of year. For information on seeing the penguins, contact tablemountain@sanparks.org or call 021 786 2329. To learn more about how you can help African penguins, be sure to visit the SANCCOB website. The organization allows for local and international volunteers to help and learn about the penguins. People living in Cape Town are encouraged to volunteer whenever they have free time.

10 Things You Didn’t Know About African Penguins
The Penguins of Boulders Beach
Kid-Friendly Cape Town: Where To Go For Family Fun In And Around The ‘Mother City’