I must admit the first time I flew into Sal island, one of the nine inhabited islands of the West African nation of Cape Verde (Cabo Verde), I was less than impressed.

The island is flat — I mean really flat. In fact, Sal was first known as “llana” or “plana,” meaning “flat.” Now it’s known as Sal (“salt” in Portuguese), because for decades the island was home to a huge salt mining industry. I thought to myself, this is the main tourist hub of the country?

But on deeper exploration, I found there’s a lot more going on in Sal than meets the initial eye. The island is teeming with luxurious all-inclusive five-star resorts, mostly opened by foreign investors, and many well-known global brands. There’s a lively town center full of restaurants and music venues. Lush white sand beaches lure you to the sand and turquoise sea. You can also venture out on a various nature, historical, and water sports excursions.

Where to Stay and Eat 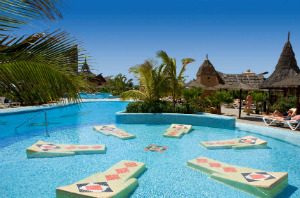 Most of the best accommodation and eateries are in the city of Santa Maria. Four- and five-star resorts are intermingled among picturesque pastel-colored houses, making it the perfect place for a classic beach getaway.

The upscale Riu brand offers the ClubHotel Riu Garopa and the ClubHotel Riu Funana. A stay here could make it difficult to tear yourself away from the hotel to venture outside. But in addition to offering everything you can imagine — from theatre productions to a nightclub with dancing to all-night snacks and drinks and tons of food at the numerous on-site restaurants to a great kid’s camp and a number of pools and on-site activities — the resorts also offer many day excursions around Sal. These resorts are favorites of mine, having stayed here more than a few times. I’m not usually a fan of all-inclusives but I found the rooms to be comfortable, the staff overly helpful and friendly, and the onsite activities abundant — and actually fun.

The Odjo d’Agua Hotel is one of few high-end locally-owned hotels on the island. While not all-inclusive, it is an elegant hotel with a fantastic restaurant on the water.  You can often enjoy live music here by local artists and lately the hotel has been hosting films on its beach. The charming hotel was given  TripAdvisor’s “Certificate of Excellence for the Year 2012,” ranking it at top of the list of the island’s 17 hotels. This means the family-run hotel beat out the island’s major players in the hotel industry.

Sal may already be teeming with hotels, there are more on the way. Hilton is planning a chain of luxury hotels throughout Cape Verde, starting with Sal in March 2016. The Sal Hilton will have 240 rooms, including 21 suites (one of which will be a presidential suite), three restaurants, a gym, a business center, and a casino.

All these resorts have excellent dining options, but if you are looking to get away from hotel food, there are a surprising number of good restaurants on the island. At Atlantis restaurant you can have lobster on the beach; it’s on the expensive end of the scale, but worth it. If you’re looking for intimacy, visit Chez Pastis. It seats just 20 and features an open kitchen that serves up a range of gluten-free products as well as vegetarian dishes. Le Privé is a stylish restaurant, bar, and lounge. The food, which has a French flair, is said to be the best on the island. Meanwhile, alcohol-free CapeFruit offers a funky-fun setting decorated with colorful handmade furniture and fresh juices and cuisine made of local fare, and Leonardo Cafe Restaurant is a chic and comfortable restaurant that gives guests a real taste of Italy just steps away from the ocean.

Looking for nightlife? Sal does have some offerings, though not as many as you’d think for a tourist destination. You will find plenty of live music at Santa Maria’s bars and restaurants, but there are only a couple of dance clubs/discos. A longstanding one is Disco Pirata, at the entrance to the town. During one of my last visits, I visited a school which turned into a disco by night and was frequented mostly by locals.

Beyond dining out, there are plenty of other things to do on the island.

While today salt is no longer the main industry, you can learn about Sal’s salt mining heritage in the town of Pedra de Lume (“fiery stone”), home to the vast Salt Crater. Located in the northeastern part of Sal, the lovely village is worth wandering through, as well as the 18th century crater, which is about 500m in radius and sits in an extinct volcano. Enjoy a curative salt bath in the one of the “salt seas.” There is a small fee for foreigners.

Another interesting area of Sal is Espargos, in the center of the island; it’s the capital of Sal and home to one of Cabo Verde’s two international airports. Browse the roadside stalls, admire the colorful houses, and drink in the views of flower-filled fields as you make your way toward the harbor city of Palmeira, whose bars and restaurants feature Portuguese-inspired architecture. Palmeira is a favorite location of divers, who enjoy underwater caves and reefs such as Olho Azul. There are actually 13 dive sites around the island, with most being concentrated around Santa Maria, Palmeira, and Murdeira. Expect to see a variety of fish, sharks and coral. 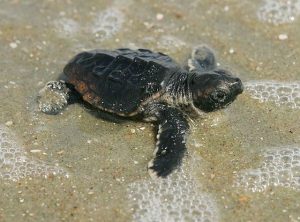 Then there are the turtles. Loggerhead turtles nest and lay their eggs on the beaches of Cape Verde’s islands, especially on Sal and Boa Vista. In fact, Cape Verde is the world’s third most important nesting area for the big loggerhead turtle, which is protected by SOS Turtle/Turtle Foundation. The turtles lay their eggs at night in July, August, and September and the baby turtles hatch sometime between September and December. Most hotels can arrange for you to view the turtles if you are visiting at the right time.

Windsurfing is also a main draw in Sal, and world-renowned wind surfers head to the island between November to June. If you’re a music lover there are countless music events and festivals year-round, and every October the island hosts the Cabo Verde International Film Festival, bringing in filmmakers and film executives from around the globe for screenings open to the public, workshops, and an awards ceremony.