Stuart Butler, a writer and photographer who has covered Africa for more than two decades, recently decided to walk across Maasai lands in Kenya in order to gain a more in-depth understanding of the impact of the 21st century lifestyle, conservation, political pressures and tourism on contemporary Maasai people. He started walking with a Maasai companion on May 25, 2015 and finished at the end of June. (To get more background on the reason for his journey, click here.) Here is a dispatch from his fifth and final week on the road.

It’s the fifth and final week of the Walking with the Maasai project in which myself and a Maasai friend, Josphat Mako, walk for a month over a part of Kenya’s Maasai lands. For this last week we zig-zagged about the spectacular Mara North and Lemek conservancies just to the north of the Masai Mara National Reserve. What a week it’s been. We’ve had a couple of our best walking days of the whole trip. 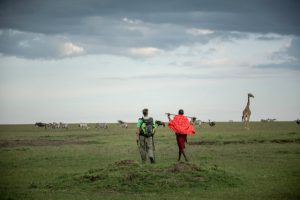 The goal of our trip was the Mara River and the foot of the Oloololo escarpment at the very western edge of the Mara ecosystem and, perhaps appropriately, one of my two favourite walk days (the other being way back in the Loita Hills) was the day we made it to the river and escarpment. What was so great about this day was the scenery, which was cliché East African savannah, and the wildlife. On no other day have we walked alongside so many animals. Zebra, wildebeest, impala and other grazers by the hundred and many of the animals, espically the giraffe and zebra, seemed fascinated to see us (at least that’s what I liked to think!). They allowed us to walk within metres of them and just stood staring at us. At times it felt as if we must have been invisible so unconcerned were they with us. And then there were the hyenas. I quickly lost count of how many we saw. They were much more wary of us though, and always kept at least a hundred metres ahead of us.

And then suddenly the Mara River was in front of us. I had been wondering for months how it would feel to reach this point and the answer was, well, not really what I expected. It was actually rather anti-climactic and I felt quite sad. Just before we got to the river I asked Mako if he would turn around and walk a month back in the direction we’d just come, “No” came his firm reply. I agreed, but when I asked if he’d walk on for a month to Lake Victoria he didn’t pause before saying “ Oh yes”. I felt the same, but the real world was catching up and I had to get back home by the end of the week for my son’s end-of-year school show. So we compromised and agreed to delay our return to Nairobi and walk for a few more days to the hills just north of the small town of Aitong. We were both keen to get back into the villages, and the Aitong area seemed a good place to mix our interest in the people and the wildlife. 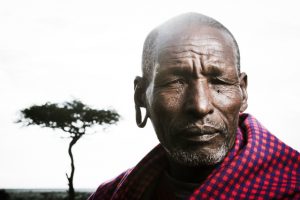 This gave us two more wonderful days of walking across Mara North and Lemek and then another two days of meeting people and hearing their fascinating stories in the manyattas around Aitong. One of the more memorable encounters was when I sat down in a dark hut with a group of ladies for a girly chat about what a pain men could be. My wife would have approved. It was actually one of the more interesting interviews of the trip. I learnt how it was to be one of a couple of wives married to the same man. I learnt of the fear of marrying a man you’d never met and of having to find your place in a household where there’s an older wife. I heard of the jealously this can bring on and even about the sleeping arrangements (“close your ears when you hear those sort of noises coming from the other wife’s bed”).

Another, more macho, but equally memorable conversation came when I spoke to a man who had had a bare hands fight with a leopard.  It was hard to say who came off the worse. He had scars on his head, shoulders and arms from the leopard’s claws, but he’d managed to half-throttle the leopard while holding it above him as they both rolled on the floor. In the end both walked away from the fight in one piece, and he has seen the leopard a couple of times since.

And now it’s back to Nairobi and home. In next week’s update I will give a summary of what I feel I have learnt from my walk, and what the plans are with the upcoming books, photos and speaking tours. In the meantime, for more on the above stories please keep following the blog on www.walkingwiththemaasai.com, and the like the Facebook page.