Stuart Butler, a writer and photographer who has covered Africa for more than two decades, recently decided to walk across Maasai lands in Kenya in order to gain a more in-depth understanding of the impact of the 21st century lifestyle, conservation, political pressures and tourism on contemporary Maasai people. He started walking with a Maasai companion on May 25, 2015 and finished at the end of June. (To get more background on the reason for his journey, click here.) Here is a dispatch from his fourth week on the road. 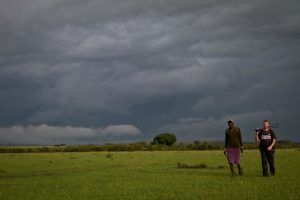 It’s the fourth week of the Walking with the Maasai project and I have finally entered the conservancies. For the next couple of weeks I will be walking across the breadth of the Naboisho, Olare Motorogi, Mara North and Lemek conservancies. This was a part of the walk I had been hugely looking forward to. Walking alongside large mammals was, after all, one of my big reasons for doing this walk and it’s in these conservancies where that’s most likely to happen. This part of the walk is also going to be a bit different to the past three weeks. The nature of the conservancies means that I haven’t been able to stay in and around manyattas and villages (there aren’t any within the conservancies) and while the conservancy managers had all very kindly given me permission to stroll across their land, I’m not allowed to bush camp  which is a shame but very understandable. People pay a lot of money to visit these conservancies and seeing Mako, Peter and myself eating pasta and tuna outside our cheapo dome tent would probably have spoilt the wilderness aspect of their safari! This means that for this part of the walk we are staying exclusively in the handful of lodges and camps inside each conservancy (yeah, we really had to be dragged kicking and screaming into these!).

The focus of my walk has also shifted slightly more onto animals and the environment. Two of the most interesting days of the last week have been spent learning all about the big cats. I have had some fascinating conversations with Elena Chelysheva from the Mara-Meru Cheetah Project and Nic from the Mara Lion Project. I think I learnt more about big cats in the few hours I spent with them than I have in years of watching David Attenborough films (Sorry Dave, I never thought I would say such a thing!). To add a little on-the-ground flesh to what I had learnt from Elena and Nic, I was also lucky enough to spend a morning out in the field with Femke Broekhuis from the Mara Cheetah Project. It was an endlessly interesting morning getting a little glimpse of what a day in the life of a field scientist involves. 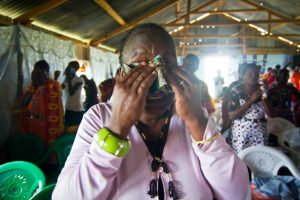 And then there was the morning I spent with Ron Beaton getting a little background into the conservancies themselves. Ron is widely considered one of the ‘godfathers’ of the conservancy movement around the Mara. Before going to meet him I was told he was a ‘character’. He certainly lived up to that. At first he suggested we just walk up to his house in the Olare Motorogi conservancy, but then, a few minutes later, called back and said “Perhaps it’s better to drive because I forgot that I have an injured lioness hiding in the garden.” By garden I assumed he meant there would be a lioness hidden under a tree somewhere in a vast plot of land. But no. It turned out that he meant that there was a lioness hiding in the flowerbed right by his front door… Actually by the time we got there it had moved off and, perhaps in order to test Mako and myself, he decided to go and look for it. Ron is probably in his seventies, but yet thought nothing of poking his head behind flowering bushes in his search for the lion. He thought even less of asking Mako and I to go and look under the car in case the lioness was seeking shelter under it. Somewhat to our relief this Easter egg hunt with a toothy difference was cut short by the kettle boiling and we all went and had a nice cup of tea from dainty china cups instead! When it came to Kenyan history and conservation there can be few people more knowledgeable than Ron Beaton. What was meant to have been a conservation focused discussion quickly turned to Maasai history and ethnicity and resulted in Ron telling Mako that he wasn’t a ‘real’ Maasai. Mako was left rather gobsmacked by the whole thing and afterwards kept repeating “I’ve never met anyone who knows so much about the Maasai. He knows more than any of the old Maasai leaders.”

The last week hasn’t all been about wildlife though. Last Sunday morning I went to church. Having learnt all about the old Maasai religions I was keen to see Maasai Christianity in action. It was certainly memorable. The church was a large tin building packed with a couple of hundred worshippers. There was much enthusiastic singing and dancing but things reached their climax in the final prayer session: Tears streamed down faces and some people, with eyes rolled to the backs of their heads, went into trances and collapsed onto the floor. The pastor later told me that this was sometimes just pure emotion, and other times because their body had been occupied by the Holy Spirit.

Next week I will leave the Naboisho and Olare Motorogi conservancies and walk through the Mara North conservancy. For more on any of the stories above, and on the Walking with the Maasai project itself please see the dedicated website www.walkingwiththemaasai.com, and like the Facebook page.