In the sixth and final part of her series, writer Starrene Rhett-Rocque reflects on her heritage, the African diaspora, and the differences — and similarities — between herself and the fascinating people she met on her first-ever trip to Ghana.

“Are you an Ashanti?” asked the teller at the Kakum Rainforest Reserve.

I was caught off guard by the question, because up until then I had been doing a terrible job of blending in while in Ghana.

But in that fleeting moment, I blew my answer.

You see, there are different entry fees at many attractions throughout Ghana. The highest are reserved for foreigners, then they decrease in price for Ghanaians, for students, and for children. At best, I normally got away with saying that I was a student. However here I was, standing before a native who actually associated me with being from her country. 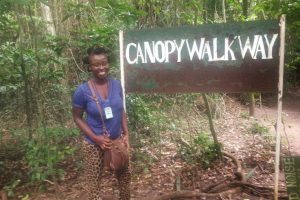 At Kakum (Photo by Starrene Rhett-Rocque)

I replied with a startled, “huh?” and she repeated, “Are you an Ashanti?” In that instance, I had a brief flashback to my DNA test results, which traced 23% of my lineage (the highest amount of any of the many African ethnicities in my blood), to Ghana, with Ashanti roots. I started to say yes, but I took too long to break my stupor, so my guide answered for me. “No, she’s from the U.S.,” he replied.

So she charged me the foreigner’s fee, yet I still screamed inside from excitement because I was surprised to find out that I stood out as much as I did during my entire trip.

Growing up in New York City, there were many instances where people would assume that I was Nigerian, Senegalese or Ghanaian. Whenever I got the question, often from Africans from the aforementioned places, they were surprised that I was American, but would always follow up with a comment like, “You’re definitely from West Africa, look at those cheekbones.”

Nothing about the that comment is surprising, because I always knew that my roots could be traced back to West Africa.

Previous to my trip to Ghana, my closest connection to West Africa had been street vendors on Harlem’s 125th street and an African Market on 116th street. But I learned about the slave trade in depth, and faced the frustrating truth that many black people in the Americas live with. I always took West African dance classes at a place called the Ruth Williams Dance Studio, where many of the instructors had experience living in, traveling, performing in and learning dance in various West African countries; some even returned with African names and they all had interesting stories to tell about the people they encountered and the culture. Their stories and my own realization that my natural attraction to bright colors, Kente cloth, batik, mud cloth, wax print, drums, rhythm, cowry shells, beads, head wraps and intricate jewelry were part of a cosmic ancestral pull that made me feel close to the Motherland — because the ancestral force was strong.

Finally, when the time came that I actually ventured to Ghana, months after getting the DNA test results, I could see what everyone was talking about in terms of my features. I saw people who looked familiar, like the distant Ghanaian cousins of people that I knew back in the United States, including people in my family. However, I got there expecting to mesh well, and like I said, I didn’t. I dressed differently: despite being what I considered dressed down in basic attire, my sneakers (a limited edition pair of Reeboks) stood out, among other items. My hair also stood out and my complexion was different, so I was told, but I still felt loved and welcome. 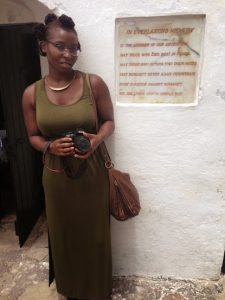 We in the Africa diaspora seem to have a mutual curiosity about each other, as I first discovered when I visited the Cape Coast Castle. Visiting one or both slave castles is standard for most visitors to Ghana, and for me it was at the Cape Coast Castle that my entire existence came full circle. I was prepared to be moved to tears when I stepped through the castle’s massive wooden doors for my tour and listen to a lecture about the horrors that took place there but I was comforted by my tour guide, Kwabena, who made it a point to greet me, the only black person in my group, first.

“Welcome back, my sister,” he said as if we had met before, and then asked for my camera so that he could take photos of me experiencing the castle.

I followed as he explained how the slaves were abused, raped, tortured, and piled into separate dungeons, laying in their own waste, sick and diseased in some cases, for weeks, sometimes months, before being forced through the “door of no return,” the last threshold they crossed before voyaging to America and the Caribbean. My tears never flowed. Instead anger was the emotion that dominated. I felt myself huffing, puffing and grunting while listening to the explicit and sometimes gory details of the events that took place then, and I wondered what life would have been like for all of us had that dark phase in history never happened. Yet on the other side of the door of no return, which we crossed, there was a sign that Kwabena pointed out that read, “door of return.” He prompted us to cross back through it and explained that this sign was an updated homage to the people in the African diaspora who return to explore their roots. The Cape Coast Castle tour concluded in a portion of the castle that was a museum ode to the descendants of slaves.

“Slavery was a terrible moment in our history but it is also the reason why you can find people of African descent around the world,” said Kwabena. “We learn our history so that we can be reminded of our mistakes and never repeat them, but I want to leave you on a positive note as I remind you of the contributions of people of the diaspora in America like jazz, for example.”

He continued rattling off facts from the wall, which had various images of greats like Malcolm X, Sojourner Truth, Duke Ellington and more, and that was the moment I felt my rage shifting to a more positive perspective. My ancestors were resilient and creative people who survived what many people couldn’t and laid the groundwork for much of what the world has become. America is a superpower because of the slave trade, and the driving force of most pop culture around the world can be attributed to contributions from Black people. I am able to travel, explore and reconnect with my distant heritage because of the foundation they laid for me.

I had a lot of conversations with many curious Ghanaians who engaged me in chatter after deducing that I was either from the UK or the US, about why I visited. Many of them were surprised that I wanted to see Ghana at all and inundated me with questions about what the United States was like.

Ghana and the United States are different worlds but we also have more in common than we may believe. New York is gritty and fast-paced; there’s a hustle mentality, a frantic energy and sensory overload that isn’t matched by many places. However, Accra, Elmina, and Kumasi are also gritty, fast-paced and frenetic, and I saw the concept of “hustle” taken to another level. At home, I saw street vendors selling everything from batteries to movies, anywhere they could—on the street, and particularly in beauty shops and barbershops. In Accra, Elmina and Kumasi, I really saw people selling literally everything from steering wheels to phone cards to pieces of fresh caught prawns. They sold on sidewalks, at stalls, and literally in the streets, bobbing and weaving through traffic to try to catch an interested driver or passenger’s attention. They often approached me when walking down the street to try to sell me something but also to get a glimpse of me. There were many times when my guide said he heard people speaking their curiosity about me in Twi, Ashanti or Fante, in admiration of my style. Occasionally someone would compliment me in English and some school girls actually asked to take a photo with me, but they all seemed unaware of how fascinated I was of them, and how much I admired their beautiful onyx-hued skin, a complexion I don’t see much at home, as well the African-influenced styles that they wore. A lot of the people I encountered were wearing homemade clothing created from beautiful fabric and prints.

I was in love with the head wraps that many women wore, the one-of-a-kind dresses, the well-tailored matching suits that I saw on a lot of folks, and the overall beauty of people who seemed so effortlessly regal and cool. I let them know that the sentiment was returned as much as I could.

“We love Black Americans,” said Nii, one of said curious Ghanaians who actually engaged me in conversation about my journey. “We think you are strong and we love that you set trends and don’t let anyone get you down and it inspires us.”

“But you know, we are aware that we get that resilience and penchant for trendsetting from our African ancestry,” I replied. 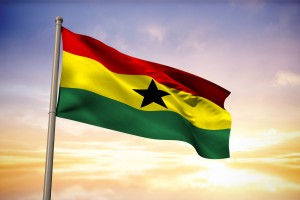 He nodded, smiled and continued loading a hotel vending machine, which happened to be next to a replica of Ghana’s national flag, with water. I am convinced that noticing the flag in that moment was the universe’s way of inspiring me to write this piece. Ghana’s flag is red, gold and green with a black star in the center, a design that was inspired by the Pan-African movement employed by Marcus Garvey, W.E.B. Dubois, who was an honorary citizen of Ghana, and Kwame Nkrumah.

Among some of the core philosophies of the Pan-African movement are unity among the diaspora, and that people of African descent should return to Africa at some point to explore their roots. After many cultural exchanges, trying new food, seeing new sites and learning from and teaching people as well, I realized that my time in Ghana was one of the most liberating and thought-provoking experiences I have ever had. I didn’t mind not blending in after a while because I learned that in their eyes I am distinctly Black American, but with West African ancestral flair—a combination that results in one smooth individual.

Part 1: Doin’ Accra: Six Ways To Catch Some Culture In Ghana’s Capital
Part 2: Staying Safe In Ghana: A First-Timer’s Tale
Part 3: Shopping In Accra: Five Places To Get Your Bling On
Part 4: Gettin’ Wild In Ghana: 5 Attractions For Nature Lovers
Part 5: Off The Beaten Path: Four Places Worth Finding In Ghana