In part two of her six-part series, writer Starrene Rhett-Rocque gives the low-down on the safety and security situation in Ghana. As a first-time visitor to the country she had some fears and concerns going in, but found out that the reality was much different than she expected.

Prior to my impending two-week solo trip to Ghana, I was very anxious, since I didn’t know what to expect. Other people’s fear of the unknown added more pressure: Friends and family raised concerns over Ebola, financial fraud, robbery and car wrecks, causing me to have a hard time sleeping in the days before I left. But cancellation wasn’t an option, so I decided to move forward with what became one of the most pivotal experiences I’ve ever had in my life — only to be reminded that many of the things we fear can happen right on our own soil.

When I got off the plane in Accra, the first thing I did was attempt to withdraw money from the ATM, only to be informed that my card had been blocked and that I needed to notify my bank. When I greeted my guide — a.k.a. my babysitter for the next two weeks — he was nice enough to let me call my bank using his phone. It turned out that my identity was compromised at JFK airport in my hometown of New York, which was why I wasn’t allowed to withdraw money. I don’t know how it happened but I did use my card at four different vendors. (I’ve narrowed down the culprit to Shake Shack, for reasons I won’t get into.) But my point is, identity theft can happen anywhere.

Thankfully, the situation worked itself out, and I was able to get the money I needed.

When I managed to contact people to let them know that I had arrived safely, the main question that I got was about “the Ebola situation.” Well, let me just say that the news the American media runs about Ebola is incredibly skewed. West Africa is comprised of about 16 countries and three of them — Sierra Leone, Liberia and Guinea– are plagued with the unfortunate disease.

Due to Ghana’s proximity to the affected nations, Ebola is a concern in the country, but not a current problem. I saw preventative PSA’s, but they weren’t dealing with a crisis, nor had they uncovered any cases of the disease at the time that I was there. It’s also important to note that the average traveler most likely won’t get anywhere near the virus, unless they eat contaminated bush meat, or come in contact with the bodily fluids of an infected person. The folks who were diagnosed in the United States were traveling healthcare professionals who had recently treated Ebola victims, or US healthcare workers who came in contact with the latter.

As a typical traveler (not a healthcare worker), what posed more danger to me than anything else was malaria, yellow fever (you can’t even enter the country without proof of vaccination), food-borne illnesses, physical safety and road accidents.

After I settled my financial snafu and began to relax, I started to observe the sights and sounds and soak in the new culture. I didn’t see hordes of people wandering around in a zombie like state due to being stricken with Ebola or some other rare disease. I saw cities, towns, stores, houses and every day people living their lives. They went to work, went to school, partied and lived the lives the way everyone goes about living day to day. 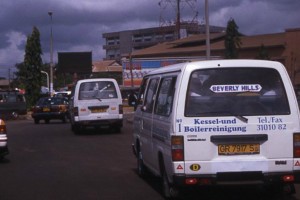 In terms of physical safety, I had moments where I noticed people staring at my iPhone as I was snapping photos. In a few instances, people asked me if my phone was an iPhone 5, while eyeing it in a way that suggested they were extremely interested. My driver informed me that had I been careless with my phone, as in leaving it lying around or putting it in a position where it could get snatched easily, and that it could have been stolen, just like in New York City, where phone thefts are a major problem. In Ghana the money one could get from re-selling an iPhone could pay the bills for a few months. But luckily for me, that crisis was averted.

The only major scare that I had during my trip was a minor car accident on my last day. During our drive back to Accra, a car in front of us somehow drove over a large branch that was in the middle of the road, broke it in half, and the force from the snap sent a piece of the branch flying backward toward our car, severely cracking our Land Cruiser’s windshield. The branch didn’t break the glass, but the impact was hard enough that my guide and I were covered in glass. I was shaken up at first, but everything calmed down eventually. We got the glass off of us without any significant cuts, and made it back to Accra where we switched cars. I made it back to New York safely, limbs and valuables intact, a couple of days after that.

After spending some time in Ghana and coming to the realization that my life was no more in danger there than it was at home — and that my guide was a professional who was committed to protecting me — my anxiety began to fade. I carried myself the same way that I do when I’m at home, with the exception of snapping tons of photos. I didn’t flash valuables, kept my purse tightly draped across my body, and kept my wits about me. There were moments when I could tell that street vendors were trying to get over on me, but I didn’t fall for it, and my guide, knowing that I’m a tough cookie, was my backup whenever I called someone out who was trying to swindle me.

In hindsight, my advice to anyone dealing with travel anxiety imposed by others is to understand that they care about you, which is why they are expressing their concerns. But your trip is your trip, and it won’t be anywhere near as bad as what fear makes you imagine.

Some of my favorite experiences during my exploration of Ghana were mingling with locals and answering curious inquiries about why I came to visit, and what America was like. My heart was stolen after spending time with some school children who were thrilled to get a visitor. Best of all, I returned home with a new perspective on life. As cheesy as it sounds, it was this trip that has taught me not to sweat the small stuff.

Part 1: Doin’ Accra: Six Ways To Catch Some Culture In Ghana’s Capital
Part 3: Shopping In Accra: Five Places To Get Your Bling On
Part 4: Gettin’ Wild In Ghana: 5 Attractions For Nature Lovers
Part 5: Off The Beaten Path: Four Places Worth Finding In Ghana
Part 6: Coming Full Circle: Tracing My Roots In Ghana