In part four of her series, writer Starrene Rhett-Rocque ventures into the wilderness of Ghana during her first-ever trip to the country. As a New Yorker, urbanite, and self-confessed “non-outdoorsy type,” she was nervous at first, but put her aversions aside and managed to revel in Ghana’s truly wild and wonderful flora and fauna.

With the exception of an occasional stroll through the park or purchasing fresh flowers or a plant for home design, I am not a nature person. So when I saw that my itinerary for my trip to Ghana incorporated some outdoorsy type activities I was nervous but I endured. However I am open to trying anything at least once, and during my trip I played with mona monkeys at the Tafi Atome Sanctuary, and even attempted to climb Mt. Afadjato. Despite my aversion to nature, I admittedly  had a good time during each of these experiences, even when things got difficult.

So whether you’re like me and a little nature averse, or a full-fledged nature-lover, here’s a breakdown of attractions you may enjoy if you’d like to experience the flora and fauna of the land of gold. 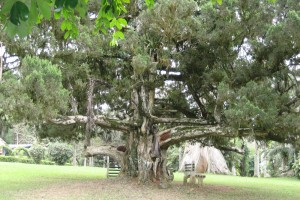 Aburi Botanical Gardens is located about 35 minutes from Accra in the Akuapem hills, and it is where horticulture and botany enthusiasts can explore and be titillated. Visitors can either tour alone or walk with a guide. I chose the latter option and ended up wandering the grounds with a guide and some school children who were just as interested in me as they were the plants and trees. The weather in this area is cooler than in Accra, so walking around won’t be a hot and sweaty ordeal. The guide walks you through the origins and functions of palm trees, strangle trees, allow you to sniff fresh spices like cinnamon, nutmeg, and sample berries. It’s a 5 cedis entrance fee plus 10 cedis for a guide. Bring your repellant.

The Tafi Atome Monkey Sanctuary is home of the mona monkeys, located in the Volta Region. Mona monkeys are beautiful endangered creatures living all over West Africa, and in this case, in a habitat where they are preserved and protected by locals. These creatures maintain a mostly plant- and insect-based diet, and their favorite food is bananas. They’re shy and apprehensive about human contact but can be coaxed into revealing themselves for a treat, and for a small fee one of the locals can get them out of hiding so that they come out to play.

I talked myself into actually feeding these creatures, for the sake of an interesting experience. I walked into the forest with my guide and resident mona monkey expert, who summoned them out of hiding. It was fascinating to watch these astonishingly adroit creatures swing and climb on the trees as they descended down to their next meal. They were just as nervous about me as I them, so they kept their distance as I held the banana firmly at arm’s length and watched as the monkeys curiously survey me before snatching a piece. Some were bolder than others, while others watched us from low-hanging branches before making their final decision.

The boldest ones came back for seconds but didn’t keep their big reddish brown eyes off of me while indulging. Others stuffed the banana chunks into their cheeks for later. I saw monkeys of all ages, male and female, including the leader of their tribe, who was bigger than the rest, nervously watching me being nervous but also amused by them.

Eventually, the sanctuary guide offered to try and make the monkeys climb on my arm and shoulders for a closer interaction, but I declined because I wasn’t wearing long sleeves and I was fine watching them from a distance.

Once the bananas were finished, the monkeys began ascending back up into their hiding places in the trees, but not before putting on a bit of a show by play- fighting, and showing off their agility by swinging from vines to trees and teaching their young how to do the same.

Kakum National Park is comprised mostly of undisturbed virgin rainforest and is situated about 20 miles north of Cape Coast. Key fauna includes elephant, buffalo, bongo, reptiles, primates and more. I hiked through the park on my way to the main attraction, the canopy walk, and didn’t see any animals because they are experts at hiding. However, the canopy walk is what I really wanted to do — so I did it, and survived. It’s a walk over the forest at about 130 feet, on rickety cables, until you reach the end. That sounds crazy (because it is), and this is coming from someone who has gone skydiving. Daring canopy walkers get to choose one of two options: you can do the short walk, which involves only a few bridges, or the long walk, which has double the number of the short walk. I did the long walk and actually managed to look down and snap some photos, but I was terrified. I definitely earned some stripes, and it was really cool to see the sign that said something to the tune of, “Congratulations, you made it!” on the way out. 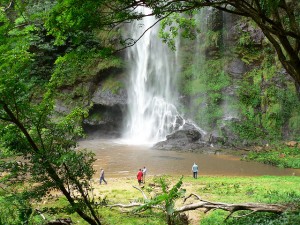 Despite not being much of a nature person, I do love being near water because it’s relaxing. That was the case with Wli Falls. Wli is the highest waterfall in Ghana, located in the Wli Natural Reserve 20 km from Hoehoe. I enjoyed my hike through the forest to get to the falls, which are stunning. The air was crisp and mild and the sound of the falls churning made me want to do yoga. I didn’t, but it’s an option. Many people go to the area to meditate. Say hello to the Rastas you will encounter along the way, and even visit them to make purchases or to get an impromptu drumming lesson.

Afadjato Mountain (also known as Mount Afadjato) is the highest mountain in West Africa. To the locals and people who actually enjoy mountain climbing, this is a big deal. To people like me, who don’t mind marveling at mountains from the ground, climbing and actually making it to the top is a struggle. I am athletic and I enjoy hiking, but I am not a mountain climber.

I got seduced by the idea of climbing the mountain because my guide mentioned that you could see neighboring country Togo from the top. It seemed like seeing Togo would be a cool travel story to tell so, I agreed to climb it despite the fact that I’ve never climbed a major mountain and I was wearing the wrong shoes. My guide, a 19-year-old who makes the trek up and down the mountain — sometimes multiple times a day in flip flops — told me that the walk would take 45 minutes each way. I made it halfway up the extremely steep mountain, with no steps or footholds along the way to help, before I got tired of slipping and my asthma got the best of me. So I decided to call it quits. I felt bad about being a failure but it was really hard, and according to the my hike master (who kept me from falling multiple times), not many people make it. Those who do make it are people who are used to mountain climbing. Sometimes people return after their first failed attempt, but I will not fall into that category! If I want to see Togo, I will just go there. But Afadjato is recommended for people who are prepared for the task.

Part 1: Doin’ Accra: Six Ways To Catch Some Culture In Ghana’s Capital
Part 2: Staying Safe In Ghana: A First-Timer’s Tale
Part 3: Shopping In Accra: Five Places To Get Your Bling On
Part 5: Off The Beaten Path: Four Places Worth Finding In Ghana
Part 6: Coming Full Circle: Tracing My Roots In Ghana