As the undisputed gourmet capital of South Africa, there is no shortage of fantastic fine dining in Cape Town, with the likes of The Test Kitchen ­­– recently voted #48 in the world – and Planet Restaurant offering world-class dining in the city centre. And yet it’s not in the city that most of the country’s top-rated restaurants are located as there is a delectable amount of fine fare in the winelands.

Bar an interloper or two from Gauteng and the KwaZulu-Natal Midlands, far and away the finest food South Africa has to offer is to be found in and around the vine-clad towns of Stellenbosch and Franschhoek. 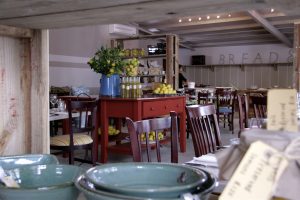 Franschhoek has long seen itself as the undisputed gourmet capital of South Africa, with the likes of Le Quartier Français, under the knife of award-winning chef Margot Janse, ensuring the ‘French Corner’ holds onto its reputation for fine living.

Margot is a regular in the respected annual awards run by local foodie bible Eat Out magazine, but LQF is certainly not the only show in town. Halfway up the scenic Franschhoek pass, young chef Ryan Shell is cooking up some inspired cuisine at Haute Cabriere’s cellar restaurant, making the most of the region’s abundant local produce.

Likewise, Pierneef à La Motte has worked its way into the league of the country’s top eateries with a fascinating menu that draws heavily on traditional Cape cuisine in both ingredients and style. Chef Chris Erasmus has recently departed the restaurant to set up his own venture in town – aptly, for this keen forager, dubbed ‘Foliage’ – so it will be interesting to see how the new Executive Chef Michelle Theron evolves her menu to keep the restaurant amongst the best in the country.

From Franschhoek, the scenic Helshoogte pass is a popular route over the rump of the Simonsberg mountain to the historic town of Stellenbosch. And apart from enjoying the view, there’s another good reason to slow down; the crest of the pass hides two of the finest eateries in the winelands. 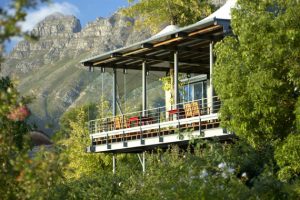 Start at Tokara, where the dramatic lunchtime views will distract you from the technical wizardry flowing from chef Richard Carstens’ kitchen. Asian inspiration runs through much of his menu, and although he’s toned down the molecular gastronomy that defined his earlier career, there’s an irresistible sense of experimentation in almost every dish. Meat-and-two-veg this certainly is not

Across the road, the setting and cuisine at Delaire Graff Estate are a little more restrained, more inspired by the classics. Indochine, where the feel is more relaxed and the menu leans towards Asia, and the signature Delaire Graff Restaurant, where European traditions meet the finest and freshest local produce, much of it from the estate’s own gardens. The views from the terrace here are simply breathtaking, but then so are the prices.

While it’s hard to ignore the likes of Tokara and Delaire Graff, some of the best food in Stellenbosch is a little hidden away. Take Makaron at Majeka House, for instance.

This quirky boutique hotel is made up of an odd assortment of neighbouring properties in an upmarket – if forgettable – suburb of Stellenbosch. If you didn’t know it was here you’d drive right on by.

Which means you’d miss the fantastic creations of chef Tanja Kruger, whose stints with Michelin-starred chef Alain Passard has informed her sustainable sourcing of ingredients and innovative use of vegetables. In a country that loves their meat, this is no mean feat!

If the menu inspiration here is French, the décor is decidedly Nordic with screed floors and light woods. If time and budget allows, book one of the revamped Mountain View suites to soak up a touch of post-dinner opulence.

Down the hill from Majeka House, the R44 road out of Stellenbosch is something of a Golden Mile for food-focused travellers with a handful of top-drawer restaurants to the left and right.

One of my favourites is Terroir, run by the affable Michael Broughton. In an industry known for large egos and loud voices he is the antithesis; a softly spoken chef who lets his food do the talking. In Terroir’s case, it’s a sultry whisper of sweet-nothings from the lips of the intense flavour-packed sauces that define Broughton’s modern-French menu. When the weather is fine, the terrace tables overlooking oak trees and the renowned De Zalze golf course are a fine place to while away an afternoon.

So too the window tables at Overture, where the informal ambience and skilled service belie the professionalism of maverick chef Bertus Basson’s kitchen crew. A regular feature in the list of the country’s top 10 eateries, you’ll be hard-pressed to disagree with those judges after sampling Basson’s rabbit terrine or saffron linguine with fresh mussels.

Back to the R44, and before long Cavalli Estate prances off to your right. It’s a striking new addition to the Stellenbosch dining scene, with thoroughbred horses competing against Executive Chef Henrico Grobbelaar for your attention. Unsurprisingly, Henrico wins hands-down every time.

Cavalli is also unique for offering two distinct menus at lunch and dinner. During the day, the bistro menu offers accomplished, but pared down dishes geared towards daytrippers keen to get back on the road.

“When tourists out in the winelands want somewhere to stop for lunch, we want to be that destination,” says Henrico.

Come nightfall though, the kitchen moves up a gear with a compact fine dining menu that offers a contemporary take on the classics. Expect to see big things from this chef in the future.

While Stellenbosch and Franschhoek have long battled it out for the country’s crown as gourmet capital, the suburb of Somerset West, a 20-minute drive from Stellenbosch, is quietly carving out a place on the podium for itself. 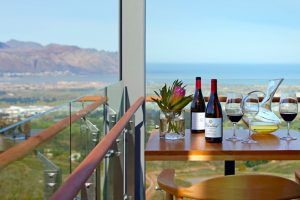 Waterkloof’s striking architecture has garnered it plenty of praise, as has the cuisine from French chef Gregory Czarnecki. With plenty of experience in Europe’s Michelin-starred restaurants under his apron, Czarnecki is a stickler for following the seasons and using hyper-fresh ingredients. The end result is colourful modernist cooking that may not appeal to everyone, but for a glimpse at cutting-edge cuisine in the Cape you needn’t look much farther than Waterkloof.

Lastly, while Waterkloof is pushing boundaries in a strikingly modern setting, Camphors at Vergelegen is doing much the same on one of the Cape’s oldest wine estates.

Vergelegen dates back over 300 years, yet Executive Chef PJ Vadas offers a distinctly modern take on classic cuisine with his elegant yet simple dishes. Local suppliers are key here, from the sustainable yellowtail served miso-cured, to the free range pork belly perfectly braised, or the honey harvested right on the estate.

It’s an ethos typical of so many of the Cape’s top chefs; using the region’s bountiful produce to both push the boundaries of cuisine while holding on to culinary traditions both local and far-flung. There is, quite literally, a choice for every palate and pocket, and while you might find yourself loosening your belt buckle a few notches, you certainly won’t go hungry in this Cape of good food.