Most of West Africa’s seaside capitals have a limited number of clean, swimmable beaches. But not Dakar. With miles of golden sands stretching all the way from the downtown Plateau area up to the airport and beyond, you’ll never be short of enough spots to kick off your sandals and plunge into the Atlantic. Here’s our roundup of the best beaches in Dakar.

A five-minute drive from the airport, Virage plage is so close to the departures terminal that you can even fit in a quick swim before your flight. Popular with families and groups of friends at weekends, the beach stretches for a couple of kilometres and you can rent mats, loungers and beach umbrellas at several locations. Watching the sun sink into the clear blue Atlantic here is one of Dakar’s sweetest treats; groups of boys play kickaround between the shallow waves, the sky blushes pink, and aircraft fly low overhead. You can rent surfboards or organise lessons from Tribal Surf Shop or sink a cold Flag beer and a handful of peanuts at the wooden bar at the far end of the beach. This beach is popular with hawkers selling fruit, sugar-crusted peanuts, woodcarvings and beach towels, which can get a little repetitive, but a polite ‘non merci’ is usually all it takes.

Coming from the airport, drive towards Les Almadies. When you hit the first small roundabout (just past the Ghanaian Embassy), turn right onto the potholed Virage road. The beach is down a rocky track. Between the strip of restaurants and nightclubs in Les Almadies and the traditional fishing village of Ngor are the soft sands of Plage de Ngor. The beach is as popular with fishermen as it is with sunbathers (listen to them chant as they rope the boats ashore) and simple cafes line the beach. The Cabane du Pecheur, which backs onto the sand, serves the best oysters in Dakar; it’s a great spot for weekend brunch. Directly opposite is the pretty Ile de Ngor, a five-minute wooden motorboat ride away across the bay. Boats leave every half hour or so, depending on demand, from the simple depot next to Maison Abaka. Lifejackets are available. Swimming across the strait is a popular Sunday afternoon activity among strong swimmers. On the other side, the beaches get very busy on weekends. But it’s worth exploring the rocky clifftops and beautiful narrow alleys of Ile de Ngor. Chez Carla, on the jetty, is a good Italian restaurant for a lazy, wine-fuelled lunch. The owners can ferry you back to the mainland (for a charge) if you miss the last motorboat back.

Coming from Almadies, head north until you reach the Shell gas station, then take a left and go left again. You’ll see a large parking area and the pink exterior of La Madrague hotel. During Dakar’s dusty harmattan season, which usually hits in January or February, Yoff plage is covered in a beautiful haze made up of dust blown in from the Sahara and the damp mist that often hangs in the air. The streets of Yoff are coated in thick sand, and the spectacular white mosque is quite a sight. Women are forbidden from walking directly past the gates. Yoff is one of Dakar’s most low-lying spots, and steeped in animistic myth and legend: ritual cleansing ceremonies are sometimes held here, under the cover of darkness. But you won’t see those; instead, come on a Sunday afternoon and rent a mat from one of the private beach areas. You’ll feel the wind in your hair, the salt on your skin and jump through the low waves. This is also a great spot for those new to surfing.

Dakar has five main surf spots, suited to surfers of varying levels. Beginners will love the small, regular waves that roll in on Yoff plage – you can rent a board from the surf shack there. Virage plage is also a sweet beginners’ spot with it’s own surf shop (see above).

More experienced surfers will want to check out the swell at Vivier, located just below the cliffs of La Cabane du Surfeur. Further along the coast is another favourite spot, Secret, while Club Med (over by the old Club Med resort in Ngor) has some of the most challenging waves in West Africa.

This hidden spot is one of the quietest, most relaxing beaches on the peninsula. It’s located down a dirt road behind the pharmacy at the junction in Les Mamelles — ideally positioned if you’re staying at Hotel Le Phare Les Mamelles. Slip into the ocean here before sunset and you’ll feel as if you’ve discovered secret Dakar. It’s also a calm spot to catch some shut-eye up against the smooth black rocks. 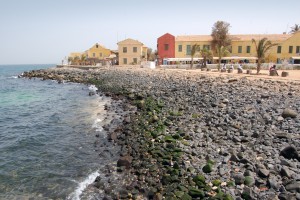 16km offshore from downtown Dakar is the rocky Ile de Goree, once the site of Senegal’s slave trade. The island’s narrow, cobbled streets are lined with colorful colonial relics of days gone by; you can trace the bitter history of the slave trade at La Maison des Esclaves or sip sweetened baobab juice at a cafe on the edge of the ocean. Ile de Goree’s beach is tiny, and often packed to the rafters on weekends and holidays. But if you follow the coastline around the curve (opposite the ferry terminal), you’ll spot a jetty that stretches into the sea like a welcoming hug. Kids love to jump from here into the gentle waves; it’s a good spot for a bracing deepwater dip. Serious swimmers might like to train for the annual Dakar-Goree race, usually held in October. Competitors must cross the entire distance to qualify, although boats accompany the race for safety reasons.

Ferries run from Dakar’s main port to Goree from 8am on weekdays and until midnight on weekends. The trip takes about 20 minutes, and the boats are well-maintained.

Ile de la Madeleine, also known as Ile des Serpents, is Dakar’s other offshore beach option. The entire island is a protected, uninhabited area covered in sandy white beaches, scrubland and vegetation. It becomes unbearably hot during the extreme summer months, but throughout the rest of the year it’s a great spot for a romantic picnic or to escape the city. Dolphin sightings are common from the beaches, but watch out for snakes; bring hiking boots or covered shoes if you plan to explore the fauna. There is no regular transport to and from Ile de la Madeleine, but groups can hire pirogues (leaving from Soumbediounne, near Fann Hock). The driver will take you there and come back for you at a suitable time; the price is negotiable, but affordable.

#InLoveWithAfrica: Why Dakar Is Too Good To Be True

The Chow Hound’s Guide to Eating in Dakar