Colonial architecture of the past mixes with construction cranes, and the buzz of an energized city meets the western edge of the Old World. Welcome to Dakar — a relatively compact urban area whose sandy streets and plethora of markets are a pleasure to stroll despite the general bustle. The city has a long list of fantastic places to check out, but even frequent travelers might not know all the ins-and-outs. Here are some helpful tips to getting around Dakar on foot, by bus, by taxi, and by “car rapide.”

Although the streets are sandy and potholed, Dakar is much more walkable than most big African capitals. Visitors from Nairobi, Johannesburg, or Lagos love to talk about how easy it is to navigate Dakar on foot. Walking around alone during the daytime is safe, and walking at night along well-lit arteries rarely poses a problem. Dakar is a very safe city, but crime can happen anywhere. Take care to avoid the beaches and the medina area, as well as market spots when walking alone after dark, and stay away from the Corniche coastal road if you’re on foot late at night; there are long stretches between residential areas, and in the past there have been isolated attacks outside the International School of Dakar. 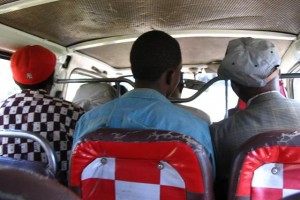 Almost as soon as you step off the plane, you’ll spot Dakar’s rusty car rapides chugging their way through the city. These blue and yellow icons are hand-painted by specialist car rapide painters, and their history goes back to French colonial rule. But don’t let the name fool you; although ‘car rapide’ means ‘fast bus’ in French, these little minivans are anything but. They are, however, cheap. You’ll pay the equivalent of less than forty cents for a short hop around town. The routes are usually fixed and direct, although the stops aren’t signposted so you’ll need to ask a local to point you in the direction of the nearest one. An apprentice always hangs from the back of the van, shouting out the destination and collecting money. Inside, there’s chatter and exchange; gossip is shared, new friends are made, and the passengers are as key to the journey as the driver. Taking a car rapide is a collective experience. From Dakar to most regional destinations, sept-place cars operate. These are refitted sedan cars with two rows of seats in the back that leave when occupied by seven passengers (or even more, sometimes.) If you plan to travel by sept-place, get to the relevant station early in the morning; they fill up quickly between 5 a.m. and 8 a.m., but after then, be prepared to wait. You can often pay extra for a seat up front with the driver, and you can also buy extra places if you’re in a hurry to depart. Try to avoid the two spots at the very back of the car if you can; the windows usually do not open, and it’s the most dangerous place to sit in case of an accident.

Dakar’s public buses are known as Demm Dikk, which translates from the local Wolof language as ‘come and go.’ For the fare of 150 cfa, you can have a seat on one of these refurbished European buses, which operate from fixed, marked spots all around the city. They are most useful when travelling between the Cheikh Anta Diop university area and the downtown Plateau district. 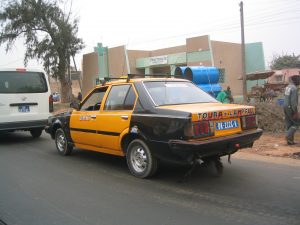 If Dakar is short of anything, it’s certainly not taxis. The iconic yellow cabs circle all neighborhoods of the city all day and all night, and the market is hugely competitive. Many taxi drivers like to personalize the interior of their cabs; expect anything from huge portraits of Muslim marabouts, or brotherhood leaders, to clippings from celebrity magazines, football scarves, fluffy toys, and animist charms. Many taxis have locks of horse hair attached to the rear bumper in an attempt to ward off evil spirits. Others have bumpers emblazoned with faith-based slogans such as ‘Allelujah’.

Don’t be afraid to bargain hard when hailing a cab. The minute you sit down, your bargaining power is lost, so make sure you negotiate a fair price when the driver pulls over. Trips within the city center should not cost more than 2000 cfa, although there is a fixed price of 5000 cfa for journeys from the main Leopold Sedar Senghor airport into town. Cab drivers at the airport will still try to charge foreigners, dubbed toubabs in the local Wolof language, much more than the going rate, so keep your wits about you and stay on top of the exchange rate.

Not all cabs are in tip-top condition. Many have missing windows or seatbelts, dodgy engines or even holes in the floor or ceiling. And the drivers like nothing more than chatting with their passengers; taking a cab in Senegal is a social occasion, so expect to be grilled on everything from your soccer affiliation to your personal life. That said, taking a cab in Dakar is generally a positive experience. Sit back and enjoy the ride!

The Best Luxury Hotels In Dakar
Diving Into Dakar: 15 Things You Have To Experience
#InLoveWithAfrica: Why Dakar Is Too Good To Be True