Ghana, the gem of West Africa, is a mystery to many Westerners. But there is so much to know about it: its role in the history of the slave trade, which of its gleaming beaches are the finest, where to find thumping nightlife, and what you’ll see in its national parks. Here we give you all the info you need to get to know Ghana and have a wild adventure there.

Ghana has existed since medieval times. Its name comes from the former Ghana Empire of West Africa: “Ghana” was the title given to ruling kings. The Portuguese arrived in 1471 to the land they called the Gold Coast (for its abundance of the stuff), and mercantile trade of African products to Europe commenced. Because of geography, Ghana became the center for the brutal trans-Atlantic slave trade on land subsequently colonized by the British and the Dutch. Many of its people were enslaved and sold from the seaside fortresses, like the still-standing Cape Coast Castle. Resistance to British rule continued through the 20th century, and in 1956 Ghanaians voted themselves into independence, making it official on March 6, 1957. Kwame Nkrumah was elected the first presidential leader of the free country.

Unlike many countries with citizens of multiple faiths, Ghana respects ALL religions and has written freedom of worship into the constitution an inalienable right. UNHCR’s 2012 Report on International Religious Freedom says that “the government generally respected religious freedom.” Ghana’s population is 71% Christian, 18% Muslim, 5% indigenous religions, and 6% citing “other” or “no religious beliefs.”

The media in Ghana is considered to be one of the most free-functioning in Africa. It was listed in 2010 by Reporters Without Borders as best place for press freedom on the whole continent, placing it higher globally than the United States, United Kingdom or France. Chapter 12 of the 1992 Constitution of Ghana ensures freedom of the press, and Chapter 2 forbids censorship. Criticism of politicians and their parties is common on Ghanaian media, and many consider the free-flow of independent media voices to have aided in the promotion of democracy since the founding of the Fourth Republic. 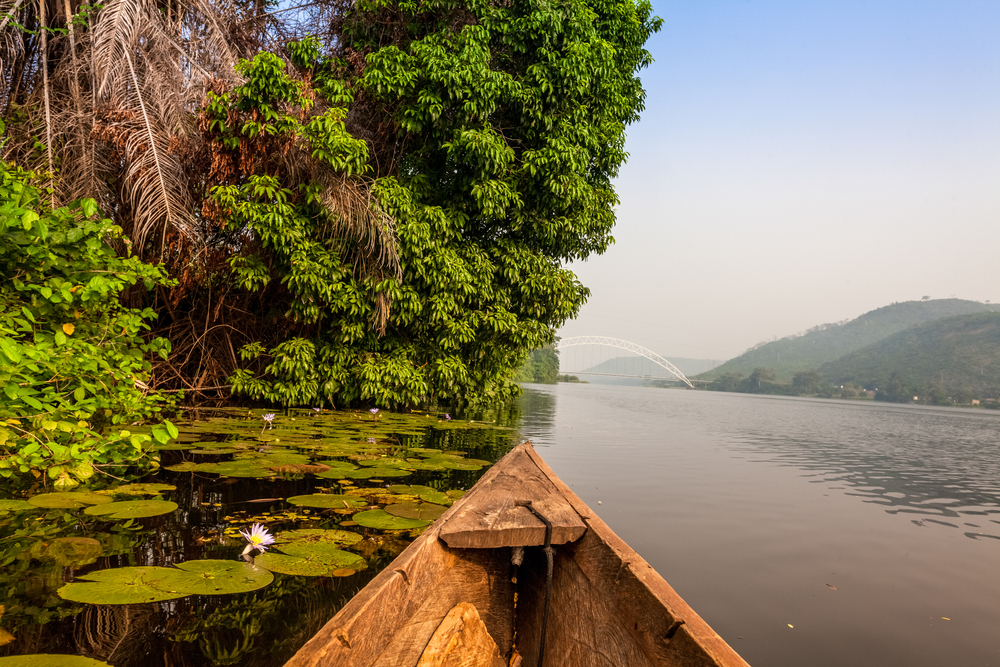 Global Peace Index listed Ghana as the 40th most peaceful country in the world, therefore making it the most on the continent! The capital city, Accra, is known for its relative navigable safety. As a matter of fact, Ghana is so peaceful that it spreads the wealth; the Ghanaian military (inclusive to both men and women) takes part in many UN peacekeeping missions, including those in the DRC, Rwanda, and Sierra Leone. 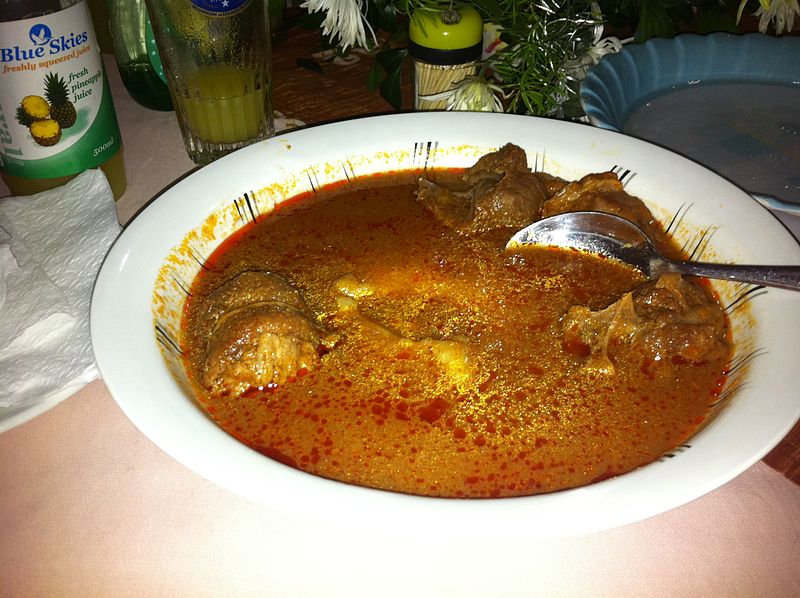 The Grub Is Great!

Fish, fish, fish! If you don’t like the fruit of the sea, then you’ll have to stick with the sub-Saharan Africa staples found here, like fufu (its hard to stress how much of a staple this dough made from tube plants is, especially in the Ashanti region), cassava, yams, and plantains. Fabulous fish dishes that are popular in the Accra region incude kenkey (boiled maize dough) with fried fish and pepper, or kebabs of all different kinds. Wash it all down with palm wine, coconut juice, or maize beer. The grilled tilapia is to die for!

Football Is The National Obsession!

Ghanaians are extremely enthusiastic about their footballers, especially their very impressive home teams which seem to scoop up trophies with ease. Ghana’s football governing body is the Ghana Football Association. Their two international teams are the men’s Black Stars (four times victors of the African Cup of Nations) and the women’s Black Queens. At the 2010 FIFA World Cup in South Africa, the Black Stars kicked their way to the quarter finals, becoming the third African team in history to get that far. Names like Charles Kumi Gyamfi, Michael Essien, Sammy Kufour, and Abédi Pelé are celebrity buzz words ’round these parts. 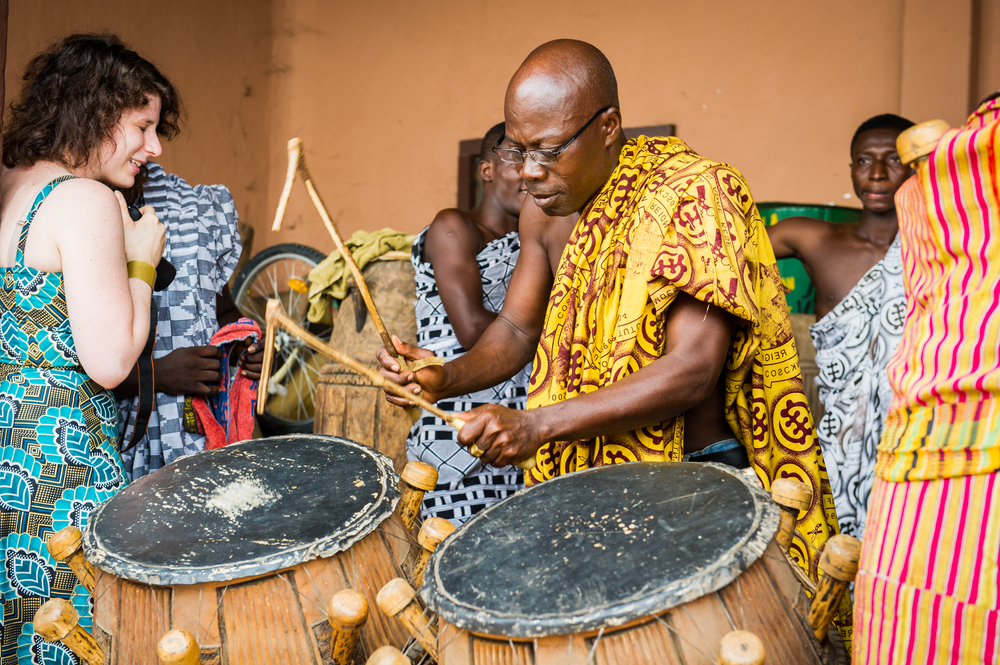 They Love To Party It Up

While most major metropolitan cities have their share of partying and lounging, Accra’s is particularly vibrant for Africa. Down on Oxford Street in the Osu neighborhood. Your local KFC and Frankie’s Red Hots can be found to satiate an (unhealthy) American cuisine craving, but it’s the bars and nightclubs that lure. Bella Roma, Citizen Kofi, Venus, Firefly…all of these neon marquees flash by and attract a series of beer-guzzling table chats or sweaty dancing. A notable venue is rapper/high-life artist Reggie Rockstone’s own Rockstone’s Office, every Sunday hosting a chicken-and-beer party. 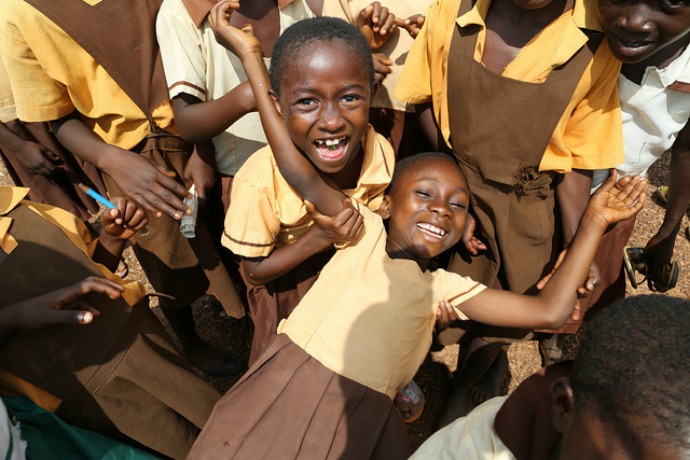 You Should Learn The Lingo!

English is the official language, yes, so do brush up on the P and the Q. However, it’s time to learn a little Twi, the most widely-understood of the over 50 ethnic mother tongues. “Eti sen?” equals “how are you?” Very important, as greetings are highly valued in Ghana. “Maa chi! Maa ha! Maa jo!” is your friendly “Good morning! Afternoon! Evening!” gestures. “Oburoni!” Now, this is one heard countless times every day, and though it could get a little annoying, it’s a way for Ghanaians to call out to you in passing, to invite you for genial conversation. Basically, it means “foreigner,” but don’t get offended. It’s well-wishing. Finally, always remember to say “me daa si!” as a solid “thank you” for kind services. 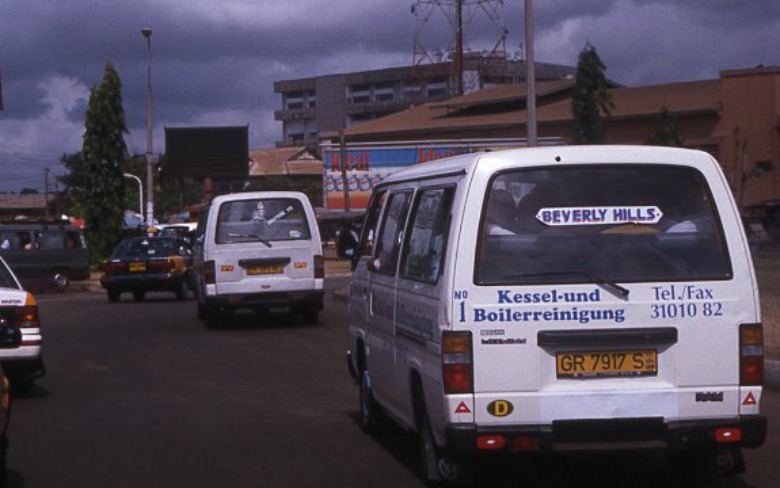 Okay, one last crucial word to learn is this one. It is, after all, the way to fly in Ghana. “Tro” is the number three in the Ga language, denoting the three pence it cost to ride this often dizzying form of shared transport in the colonial days. There’s no real rhyme to the tro-tro except for cheap shuffling around the city; you have to wait for one to come (not on a schedule), and then often wait until the driver has filled the van up to his liking. Still, get in with the people: 70 percent of Ghanaians use tro-tro in their daily commute.

At 250 miles (400 kilometers) in length,  and holding 153,000,000,000 cubic meters of water, Lake Volta is the reservoir which takes up the largest surface area in the world. It also lies at a crucial global crossroads, along the Prime Meridian longitude and six latitudinal degrees north of the equator. Swimming, beaching, boating and fishing can be done there, as well it is an easy access to national parks like Kyabobo and Kalakpe.

QUIZ: How Much Do You Know About Ghana?
10 Things That Surprise Foreigners About Ghana
The First Timer’s Guide To Southern Ghana