We’ve seen them on television emerging out of the water like a submarine at the end of its pilgrimage before they turn around to give a hard belly-flop into the water, creating a mirage of waves around them. Perhaps you’ve tried your luck every now and then at the beach, straining your eyes against the horizon of the ocean to look for signs of them, only to pack up to go home without any success. But don’t feel like witnessing the natural beauty of  the majestic whales is restricted to postcards and a team of sea researchers donning life-jackets and binoculars. During the winter of South Africa (late May to November), thousands of southern right whales migrate to the colder waters from the Western Cape to the edge of Mozambique.

The pods of whales grow into such an enormous size that it’s almost a guarantee to see them during that time, especially when you go to well known ports in South Africa where you can watch them from land like Doringbaai and St. Lucia. If you’re unable to travel to these more popular hubs for sightseeing the whales, Cape Town has multiple nearby areas where there are plenty of whale sightings like Lambert’s Bay and Elands Bay. Not everyone wants to wait around for hours in hopes of catching a glimpse of a whale, and that’s when the town of Hermanus in Western Cape comes in handy. The town invested in a “whale crier,” a person who monitors the area for any signs of pods before sounding the alarm to inform the locals in Hermanus to rush to the cliffs and see the giant marine mammals. Hermanus takes so much pride in its popularity with whales that every September, they host a Whale Festival outfitted with concerts, good food, kids zones, vintage car shows and various eco-lessons about protecting the whales and how to make a difference. 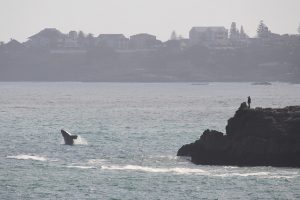 Southern right whales aren’t the only excitement found bobbing their heads in and out of the water in the wintertime. Dolphins are known to migrate to the area along with other species of whales like killer whales, humpback whales and Bryde’s whales. You may also spot African penguins in the Western Cape area as well as Cape fur seals swimming alongside the larger marine animals.

Or get off land and take your sightseeing adventures to sea by joining one of the many charter boats available along the coast (it’s advised to book your spot as soon as possible since they do get booked fast) that will take you directly into known hot spots. Multiple eco-conscious businesses like Dyer Island Cruises offer cruise rides off the coast of Gansbaai and are led and narrated by expert scientists, researchers and conservationists. Hermanus offers its own whale cruises as well.

Right whales earned their name during the 1800s, because they became easy targets among whale hunters since they naturally float to the surface when killed. The whales are quite docile to the point where they don’t shy away from humans or whale hunting ships, thus leading to the birth of their name. In fact, they were such an easy kill that they were nearly hunted to extinction. Today, when you spot a pod of whales from your charter boat or cruise, be aware of any sudden bursts of water spouting out of the surface like Old Faithful. That’s coming from their blowhole and this incredible sight occurs when they expel air to breathe. Expect a harmonic sound from the whale to follow. People in charter boats have reported getting drenched by whales breaching out of the water before slapping the sides of their bodies, creating a huge splash against spectators. Or look out for “lobtailing,” a movement where the whales will stick their tails out of the surface and hurl water forward, almost as if they’re waving at you. 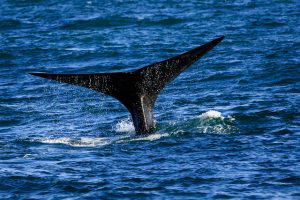 There are multiple ways you can encounter the whales other than watching from the shore or hopping on a charter boat. You can opt to rent sea kayaks from various places like Walker Bay Adventures and Percy Tours in Hermanus to get your adrenaline pumping while you’re just a few feet away from the gigantic docile whales. Or take it to skies and do an aerial tour of the whales via Walker Bay Adventures where for 30 minutes, you’ll hover over the crystal-clear water and see the enormity of the whales in their true form that cannot be seen from land. The aerial tour even guarantees whale sightings or you’ll get your full refund!

What You Should Know About South Africa’s Sardine Run

15 Things to Do Along South Africa’s Elephant Coast

Slurp’s Up: Get Ready For The 2018 Knysna Oyster Festival