The ocean’s ecosystem remains largely a mystery and continues to baffle scientists with its little understood marine life like jellyfish with neon flickering lights and algae blooms changing the colors of the sea like a biblical plot. Today, the Sardine Run is one of the ocean’s phenomena that researchers are still struggling to understand. Located along the coast of KwaZulu-Natal in South Africa, the ocean’s largest bio-mass migration occurs every few years involving fish and their predators. The amount of fish in the Sardine Run is so numerous (running up to billions) that just from the surface, you can spot them like pebbles in a shallow creek. 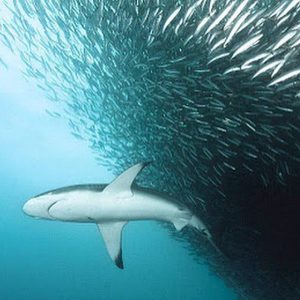 A popular theory of why this mind-boggling phenomena occurs is that a swift rush of wind pulls the fish into one direction, causing the run to change its course and grow into abnormal proportions. Another theory is that fluctuating warm waters and unsteady ocean temperature is lifting cooler water to the surface and bringing the fish with them. The mass migration draws in large predatory marine animals like great white sharks, dolphins, whales and a variety of seaside birds to feed on this free-for-all buffet. However, there is an ecological downfall that comes with the Sardine Run. Sharks and other large predators blindly follow the migration, venturing into territories too close to the shore or getting tangled in fishing nets meant for the smaller fish. In fact, in 1971, the coasts of Durban saw its most terrible plight where more than 1,000 sharks got tangled in the nets, many of them dying in the process. In other cases, dolphins, whales, sharks and sardines have found themselves beached due to their confusion and being led off safe swimming depths, resulting in widespread deaths (the amount is unknown).

Natal Shark Board works hard to monitor and deter the deaths of large marine life by abolishing the use of fishing nets in KwaZulu-Natal during Sardine Runs. Unfortunately, this caused an uproar among fishermen who rely on the nets for their livelihood. The Sardine Run is the time they bank on their businesses since they can get up to 500 sardines per crate. The organization also monitors beaches for washed up mammals that may need rescuing and escorted back into the ocean. But despite their effort, large marine life found in the water are still declining. 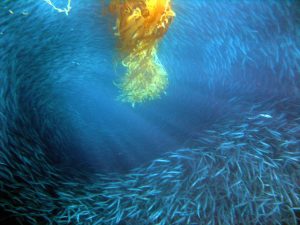 The Sardine Run occurs sporadically and the most recently documented migration happened in 2017. As time goes on, Sardine Runs are happening less frequently and scientists are unsure of the cause of its decline but suspect illegal fishing, over-fishing and loss of predators to be large contributing factors. Today, visitors who wish to witness the run can join one of the many charter boats that take their guests to where all the action is. The run is so popular that many charter businesses will leave their usual ports to make their way to the waters of KwaZulu-Natal and offer their services. Sardine Runs are unpredictable but most likely to happen from May to July anywhere from Port Elizabeth to Durban. There are multiple Sardine Run tour packages in several areas like Mbotyi, Coffee Bay, East London, Mpame and Durban.

Wildlife enthusiasts can take their experience up a notch and sign up for a diving expedition (yes, you can dive at this time). With a certified diving instructor, you can submerge into the water to see the once-in-a-lifetime view of fish creating a vortex like a double helix. It’s common to spot dolphins, sharks and whales swimming alongside the migration. Visitors can opt to snorkel and stay buoyant on the surface to observe the natural wonder from below. Keep in mind, May to July is winter in South Africa, meaning the water will be icy-cold. Wintertime is also the season of humpback whale migration that’s known to occur from Cape Town extending all the way to Durban. So during your time of visiting the coast to catch the Sardine Run, you can also join whale migration tours that gather in the waters of South Africa to stay cool. It’s believed that approximately 3,000 to 4,000 whales make their way to the coast of South Africa each winter. Because of the coinciding time of Sardine Runs and whale migration, many boat tours and beachside hotels can be fully booked, so it’s advised to reserve your spot as soon as possible.

What To Expect Along The Otter Trail In South Africa

The Best Wreck Dives In Africa