Not sure when to check out the Moroccan city of Fez? This list will narrow down some fabulous weekends where festivals are taking the city by storm. That way, you’ll arrive to the area just in time for the fun and get a dose of traditional celebration to learn more about the country’s rich heritage. And keep in mind, participating in the festivities involves music and dancing. Lots of it. Here are the top festivals in Fez to check out while you’re in town.

Every October, the Festival of Sufi Culture wows the city with eight days of music and celebration. Religious leaders and Sufi musicians grace the stage to play traditional music and talk of spiritual musings. The festivities include poetry readings, experimental films and art relating to Sufi Culture. The event is held at the Batha Museum that was formerly a royal palace, so attendants will not only learn about Sufism, they’ll also admire the surrounding architecture.

The little known group of Amazigh (Berber) people host this annual event to raise awareness and educate the general population about its culture. The Festival of Amazigh Culture is an event that includes beautiful Berber music, folk dancing and singing to celebrate the beauty of the Amazigh culture. In addition to the concert, guests are invited to participate in its art workshop to make Amazigh souvenirs and browse through vendors selling Berber goods. 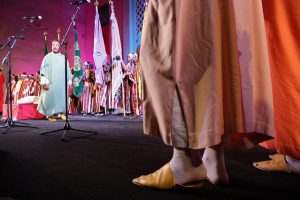 Each year in May, Fez hosts a long-awaited tradition that has been going on for more than 20 years. The World Sacred Music Festival is a ten-day long event featuring musicians from various backgrounds and religions including Islam, Judaism and Christianity. On many occasions, the musicians of diverse backgrounds perform music together as a collaboration as a message of peace. In between concerts, activists, scholars, and politicians use the stage to share their perspective and ideas to promote a better world.

See one of the country’s oldest celebrations at the Cherry Festival in June during the harvest season. The event is so popular that up to 500,000 have attended this four-day long festival. A cherry-themed parade will take place with lavishly-decorated floats and a crowning of “Miss Cherry” beauty pageant will take place as well. Not to mention, the best part of this celebration is all the cherry-flavored recipes you’ll get to try including cherry jams and other tasty delicacies. The event takes place in Sefrou, a short drive outside of Fez.

In September or October, an annual one-of-a-kind event draws in visitors from around the world to Fez. The Tissa Horse Festival is a religious celebration to honor a 15th century saint who was known for his fabulous horse collection and breeding. Locals honor the late saint by hosting a horse show with nothing but the finest bred horses dressed up in traditional attire. Horse-riders will perform a series of dances on their horses as well as mock battles with gunpowder to re-enact the loyalty the Berbers have to their king.

The Best Luxury Hotels In Fez