During your next trip to Africa, you can certainly buy gorgeous pottery sporting many colors from shops and street vendors. Or you can go directly to the source. Africa is home to several small villages where local activities center around pottery-making as a living and continuing cultural tradition. Get ready to head off the beaten path beyond the malls and bazaars, here are some of the pottery villages found throughout Africa. 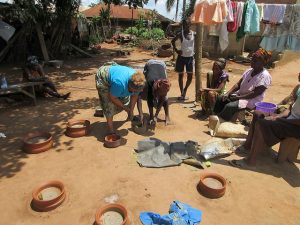 In Ghana, residents of Kuli Village apply centuries-old technique where they make beautiful potteries from clay. Both Kuli men and women (and even children) participate in the pottery making. The clay is dug up from the earth, then mixed with water until softened before it’s used to mold into pots. Oftentimes, villagers wait until rainy season since it’s easier to collect the clay. Once done, the clay pots are left in the hot sun to dry and then eventually placed over the fire to harden. They are generally used to store dried herbs and other food sources. Some pots come with additional arched-shaped lids to protect the food as an air-tight storage system.

Thousands of miles north of Ghana is Amazigh, a village deep in the Atlas Mountains in Morocco. The local Berbers live in harsh conditions of barren desert and unforgiving sun, but one of the things they remain most proud of is their pottery work. The potteries are made from clay as well, then hand painted to make them a decorative addition to people’s homes. They come in many forms from large jugs to tajines, which later are transported to more popular souks and bazaars in Marrakech, Fez and Casablanca. Another pottery-making village in Morocco is Tamegroute, nine hours south of Amazigh and near the Sahara, where locals have been sculpting emerald-green jugs since the 16th century. There, visitors are encouraged to visit for a workshop where they will be taught the ancient way of making these green potteries to take home. The workshops are available all year except summer months when it’s too hot.

For those traveling to Egypt, stop by Tunis (not to be mistaken for the city in Tunisia), approximately 100 km from Cairo. Guests will be pleasantly surprised by the quaint village (which by the way, is currently occupied by about 4,000 residents) overlooking a picturesque lake surrounded by swaying palm trees. Many visitors to Egypt cite Tunis to be one of the most beautiful places in the country. However, pottery-making isn’t an ancient-old tradition among locals in Tunis. The industry is relatively new and started when Swiss potter, Evelyne Porret moved to the area in the 1980s and taught local children the art of pottery making. Since then, the children have grown up, opening up their own pottery studios with their own flair, making Tunis a popular attraction for tourists to browse through beautiful ceramics available for purchase. 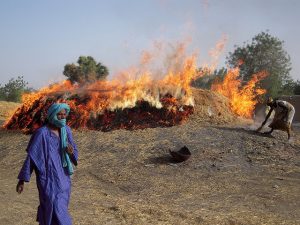 A less well-traveled village in Africa is Kalabougou, a Bambara village in Mali by the Niger River. Women are assigned positions as potters to honor their tradition and as a way to provide for their family. The pots are so popular and high in demand that women have to make 2,000 pots per week before they’re ready to be shipped off to the market. During the pottery-making process, women are also responsible to scavenge for branches, leaves and straws to pile up into a large mound for a gigantic bonfire to harden the pots. It’s advised to stick around and watch the impressive tradition of firing up the pots. 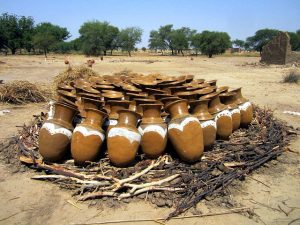 Head over to southwestern Chad and you’ll find Gaoui, a tiny village occupied by the Sao people. Visitors will find locals pounding the clay into perfect forms in the midst of unique architecture of red clay buildings and curvy-white stripes across its doorways. You’ll find stunning murals on the sides of the clay walls depicting local plants and wildlife. Once you’ve finished admiring the potters at work, stop by its museum to learn more about Sao culture through its series of ancient pottery art pieces.

10 Uniquely Moroccan Souvenirs To Nab Before You Leave The Country

The Ceramic Artistry Of Fez, Morocco