So you think zebras are the only horse-like animals roaming free on the continent? Think again. Africa has its own wild horses that can be found in various locations. The feral horses can be admired (from afar) and make for spectacular photo opportunities. So grab your camera (preferably one with a long zoom lens) and get ready to snap some of the best photos to add to your traveling album. 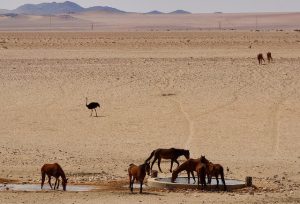 Before you get started on your adventure however, there are a few things to keep in mind. Seeing the horses that are free of human captivity is a wonderful thing to witness, but you need to stay smart about keeping your distance. It’s easy to forget that they’re feral and will not behave the way farm horses do. When venturing too close to them, it’s unpredictable to see how they may react around humans. And of course, it’s highly recommended to not feed them. But once you’re confident in the rules during horse viewing, you’re in for the time of your life.

We will start of with the most famous place to see the majestic animals unclaimed by humans. Not far from the Skeleton Coast is the barren desert of Garub in Namibia.  Visitors will go out of their way to visit this desolate piece of land just to see a natural marvel — the feral horses of Garub. The horse’s ability to survive in the desolate desert has left many people stumped about just how the animals do it. How could they live in this harsh terrain with unbearable heat and no trees around for shade. In reality, they have learned to adapt to the unforgiving environment by staying near the man made watering hole over the years. To this date, no one is completely sure where the wild horses originated from but the strongest belief is that they are descendants of horses that fled or left behind during the First World War in 1915. The remaining horses have earned the nickname of “ghost horses” due to their shocking presence in a dead land. There’s an estimated 250 to 300 horses freely roaming in Garub. 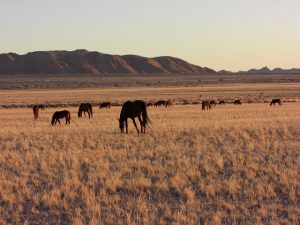 In Western Cape, it’s possible to spot about 20 feral horses grazing next to ostriches as if they were zebras. You can find them at Rooisands Nature Reserve, an idyllic spot with gorgeous mountains in the backdrop. It’s believed the horses were brought over by the early Dutch settlers who eventually let them run free after no longer needing them for their farms. Another popular theory is that these horses survived a shipwreck and swam safely to the shores where they remained ever since. Still, the origin of how the horses arrived to Rooisands Nature Reserve remains unsolved. Unlike the Namib desert, Rooisands Nature Reserve is an easier environment for the horses to thrive. The reserve’s wetlands and lagoons provides them plenty of clean water and foliage to live off of and they face little to no predators in the region. During colder months, the horses have adapted by growing thicker hairs to stay warm.

Yet another place to see them is on the other side of South Africa is Paardeplaats Nature Retreat in Lydenberg (near Kruger National Park), another terrain where its possible to catch a glimpse the animals with their magnificent manes flowing in the wind. Or head a few miles south of Lydenberg to Kaapsehoop where another herd of wild horses can be spotted grazing nearby. Kaapsehoop was formerly established as a gold mining town and it’s believed the horses may have been abandoned by previous gold miners who deserted the town. If there was anything to learn and take away from viewing the horses, it would be the life lesson that no matter what situation you find yourself in, we’d hope to have the adaptability and endurance that the horses have withstood during their test of time.

Swimming With Horses In Mozambique

Top Wildlife To Look For In Etosha National Park