Award-winning writer and photographer Stuart Butler always wondered how much work was involved in becoming a safari guide. He got his chance when the acclaimed safari and conservation group Asilia Africa let him be a “fly on the wall” at their wildlife guide training camp in Tanzania’s Tarangire National Park from mid-March until mid-April 2016. Here is the first of his series of dispatches from the month he is spending interviewing aspiring guides and training staff, learning how to track wildlife, and partaking in bush walk training, fly-camping experiences and night safaris.

“Stupid bird likes to pull every Helen’s hair,” said Pietro with a grin. “Remember this and it will help you with identification.” 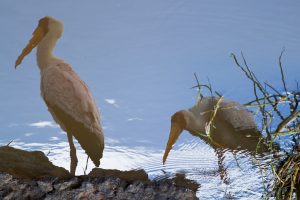 We were in Tarangire National Park, which forms the southern piece in a jigsaw of stunning national parks in northern Tanzania. Tarangire might not be as well-known as the nearby Serengeti or Ngorongoro conservation area, but it’s every bit the equal of those two household names. At least that’s the case during the June-to-January dry season. At this time of year wildebeest and zebra pour into the park by the thousands, seeking a cold drink at the water-logged swamps and the Tarangire river, which forms the core of the park. Lying in wait for the herbivores are hundreds of lions which are known for their rare tree climbing antics. In addition to this epic sweep of predators and prey are the elephants, and in Tarangire they come in wildebeest migration-sized herds. In fact, Tarangire is known for having one of the densest elephant populations in Africa. However, now is not the dry season and at this time of year, when the rains replenish waterholes and the grass grows fresh, short and nutritious in the regions to the north of the park, many of the animals migrate out to newer pastures. The zebra and wildebeest are nowhere to be seen, the elephants, whilst still present, become more scattered and harder to find and the lions blend nearly invisible into the shoulder high grass. But though the mammals are gone the birds are here in abundance. Tarangire is a flapping, squawking, gliding rainbow of colourful wings and with some 450 species of birds recorded, it is, many twitchers would say, the finest single bird-watching destination in Tanzania. Which is lucky, because it was birds I was here for.

Before we go any further I have a confession to make. I’m no birdwatcher. Sure, I can tell my flamingo from my magpie and my swallow from my osprey, but present me with a selection of what, I’m reliably informed, are called LBJ’s or Little Brown Jobs by the ornithological brigade, and I’m as confused as an ostrich that’s suddenly taken to the air. Pietro though was determined to change that. 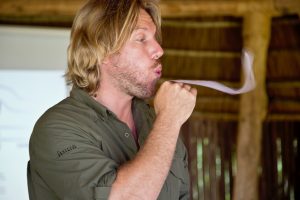 Italian by birth and African by desire, Pietro Luraschi has a surfer’s mop of blonde hair, a conviction that only Italians know how to cook (and in this he’s quite probably correct), and a self-taught knowledge of the African bush and the creatures that live within it that’s extraordinary in its depth and breadth. He also just happens to be the head guide for Asilia Africa.

For the past week I have been something of a fly (or perhaps sparrow?) on the wall of an Asilia Africa wildlife guide training camp and the past few days have been all about remembering silly sayings, attending bird-related lectures that were far too complicated for my little brain and, most excitingly, getting out into the bush and learning how to tell the difference between an Eastern chanting goshawk and a dark chanting goshawk (the difference being that the former has orange legs and a yellow seer – for you and me that means the bit around the base of the beak – whereas the latter has orange legs and an orange seer). Asilia Africa employs some 46 resident guides, four spotters, nine trainees and 15 safari guides throughout its dozen Tanzanian camps. These guides are renowned as being among the best in the business, but in order to stay one step ahead of the game, every year all the guides are sent on training courses where they can hone their skills and increase their knowledge. This week’s group of guides were here to learn all about birds under the expert guidance of Pietro.

We were parked up on the banks of the shallow, muddy Tarangire river, “Stuart. It’s your turn”, commanded Pietro as he pointed at a tall, memorably colourful bird, “Please identify that bird using the technique we just learnt.” I was nervous. I could barely remember the Stupid Bird Likes To Pull Every Helen’s Hair memory device (it stands for Size, Beak, Leg, Plumage, Eye, Habit and Habitat) let alone act on it. Pietro had told us that if we were faced with a bird we didn’t know then we could glance at it for a moment through binoculars and, taking note of the bird’s size, colouration, habits and habitat, put down our binoculars, pick up a trusted bird book and hopefully identify our feathered friend for an Asilia guest.

“Well,” I hesitantly began as all the other trainees turned to watch, “it’s bigger than a guinea fowl, it has a long, pointed yellow beak, it has very long, reddish-pink legs, its body is mainly white but it has black on its wings and a red forehead, its eye is orange, it seems to be looking for something in the water to eat and its habitat is wetlands.” I put down my binoculars and start to flick without confidence through the bird book. All the other guides smiled indulgently as I struggled with identifying what was to them such an obvious bird. I browsed through the raptors and paused on the nightjars, but even I, with my very limited knowledge, quickly realised it didn’t look like any of these. I moved onto water birds. It was not an albatross, of that I was sure. It could perhaps be a heron of some kind but the colours didn’t match so I flipped the page. Ahh, that’s more like it — I’m onto the storks and one seems a perfect match. 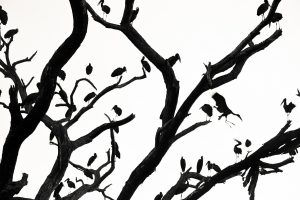 “So this means it must be a yellow-billed stork!” I triumphantly announced. Pietro nodded his head, “Very good,” he said with a sly grin. “But now, remembering what we covered in this morning’s lecture, can you tell me about the structural composition of its feathers?” Oh well, perhaps I still have a bit to learn!

In next week’s dispatch I will continue to struggle to get to grips with LBJ’s, and I’ll move onto the ecology course in which I fancy I might get to remove my dunce cap.

To read the intro to the series on AFKTravel, click here.