Any of these parks on its own makes an outstanding safari destination; combined, they offer some of the best wildlife-watching opportunities to be found anywhere on the African continent. 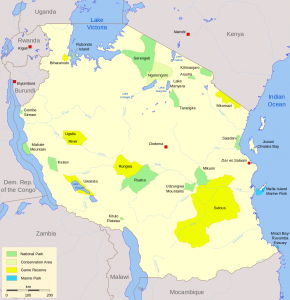 Map of the national parks of Tanzania (Wikimedia Commons)

The two highlights of wildlife viewing in the Tanzania northern safari circuit are Serengeti National Park and Ngorongoro Crater, which is part of the Ngorongoro Conservation Area.

Serengeti National Park – with an area of over 14,000 square kilometers – is a magnificent, wild and open area teeming with wildlife and birds of every sort. It is adjacent to Kenya’s Masai Mara National Reserve, which greatly extends its ecosystem, and is particularly renowned for its annual wildebeest migration. Beginning around late April or early May – when the plains start to dry out after the rains – massive herds of wildebeest, numbering over one million in total, converge and move westwards and northwards seeking new grazing grounds. Encountering large numbers of these hoof-stomping, grunting beasts kicking up the dust in a parade that can stretch for several dozen kilometers is impressive enough. But the most dramatic part of the migration comes around June or early July when the wildebeest begin to cross the Grumeti River, plunging down its steep banks, dodging hungry crocodiles and then attempt to climb up intact on the opposite shore. The wildebeest are accompanied by large numbers of other animals, especially zebras, which make the migration even more spectacular.

Another highlight of the Serengeti is its predators, especially its lions, which are regularly seen on the rocks (kopjes) of the central Serengeti. Because of the size of the Serengeti, we recommend spending at least three to four days in the park exploring its differing habitats.

The Ngorongoro Crater, fringing the Serengeti to the east, is another outstanding destination for spotting wildlife. Within its approximately 8200 square kilometer (3200 square mile) area, it offers shelter to one of the highest densities of wildlife anywhere in Africa. Lion sightings are almost guaranteed. Black rhinos, with their beady eyes and menacing horns are also regularly seen; indeed, Ngorongoro is probably the best place in the northern circuit for spotting them. 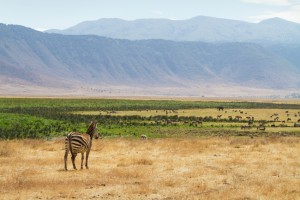 Unlike northern Tanzania’s other wildlife areas, where viewing time is unlimited between sunrise and sundown, the crater can only be visited in relatively short time chunks, with viewing permits issued for either the morning or for the afternoon. Nevertheless, this should be sufficient time to begin to appreciate the Crater’s natural abundance. Getting an early (dawn) start to beat the crowds is highly recommended. This will also allow you to take advantage of optimal wildlife-viewing hours.

Once you have had your fill of the Crater’s wildlife, there are many trekking possibilities in the surrounding Ngorongoro Conservation Area, ranging from half-day to multi-day treks. These will give you a break from being inside a vehicle. They also offer opportunities for interaction with the local Maasai people, who will likely assist you on your trek, and for taking in the spectacular scenery dominated by a string of mostly-extinct volcanoes.

Tarangire National Park is often bypassed in favor of its more famous neighbors, but it is a wonderful place, especially during the dry season from about July to October. During these months, it is practically overrun by elephants and other wildlife, which are drawn by the permanent waters of the Tarangire River. Apart from its high dry season wildlife concentrations, Tarangire is also notable for its profusion of stately baobabs, which are silhouetted against almost every vista.

Lake Manyara National Park is unique in that, for part of the year, over half of its area is covered by water. Thanks to this, Lake Manyara draws large populations of flamingoes, and birding in general here is outstanding. There is plenty of other wildlife present as well, including hippos, buffaloes, giraffes and elephants. 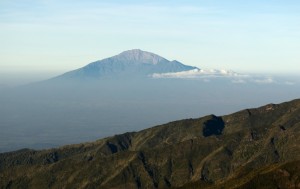 Arusha National Park is not as good for wildlife spotting as the rest of the northern circuit, due to its dense, lush vegetation. But, it still has plenty of animals. Giraffes, zebras and buffaloes are commonly spotted, elephants also, although not as frequently, and leopards are present. Birdlife is rich, especially around the lovely Momella Lakes. Arusha Park is also exceptionally scenic, including beautiful Mt. Meru on its western edge and the stunning Ngurdoto Crater to the east. The park lies roughly halfway between Kilimanjaro International Airport and Arusha, and access is easy, making the park an ideal day or overnight stop either en route from the airport to the other parks further west, or for those headed from Arusha east towards Moshi and Mt Kilimanjaro.