Staring out over the expansive plains of the northern Serengeti, it’s impossible not to feel as if you have the edge of this national park all to yourself. You see, year-round, the Serengeti is packed with tourists, but here it’s only busy once a year for the wildebeest migration crossing the Mara River. Other than this natural wonder, you have the place all to yourself.

Staying at Asilia Africa’s Sayari Camp, the border of Kenya is so close that your guide will point out the humps of the country’s low mountains, explaining you could walk there if it wasn’t for the dangerous wildlife here. Northern Tanzania feels like the last outpost, where you’ll drive for miles and never see another vehicle. 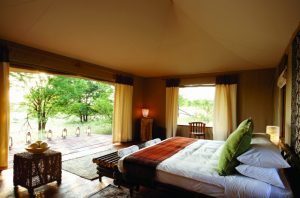 I visited in February; it’s hot and sunny with very little rain during the day. The game are easily spotted amongst the dry grasses, and you can enjoy a sighting for as long as you want without being ushered along by another safari vehicle, an all-too-common complaint in the Serengeti.

A stay at Sayari Camp is luxurious and exclusive. The camp is Asilia Africa’s flagship lodge and offers a contemporary twist amongst the typically colonial-style lodges scattered across Tanzania and Kenya. Its large, open deck leads into a sitting room furnished with large couches, black-and-white photography and bright pops of orange and cerise.

I would imagine that the definition of ‘glamping’ or ‘glamorous camping’ was born here. The tented units are set far apart, with small, dirt pathways leading between them. Set atop wooden decks, the hillside suites offer uninterrupted views over the Serengeti facing into Tanzania’s famous national park. The privacy is astounding, with barely a whisper heard from other guests when you’re cozied in your suite.

The large stone bathtubs overlook the bush, with the doors in front of them sliding all the way back to make you feel as if you’re outside. Large, low beds under romantic mosquito nets make you feel instantly at home, and sprawling on the day bed outside on the deck makes you feel like a king (or queen). 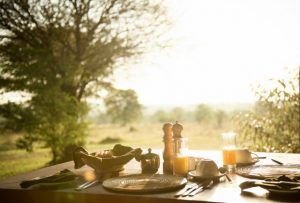 Originally a seasonal camp that moved across the park, Sayari was made a permanent fixture over five years ago, and is one of the few lodges close to the Kenyan border in this section of the Serengeti National Park.

The camp has also played a major role in the conservation of the surrounding area. Local villagers with no means of a productive livelihood had turned to poaching the abundant wildlife for subsistence, and to sell to make wildlife products. Sayari Camp now offers secure employment and assists wherever possible with daily life in the village. The level of poaching by those living on the borders of the national park has dropped to almost nil.

The northern Serengeti is predominantly flat grassland with impressive rock kopjes jutting out of the landscape. As a wildlife enthusiast, you’ll soon discover that the game rangers always head to these kopjes during game drives, as they tend to house a number of big cats. Resident leopards and lions with their offspring are easily spotted lazing about on the big rocks here. Cheetahs hunt on the plains, and we were lucky enough to witness a kill on the way into Sayari. 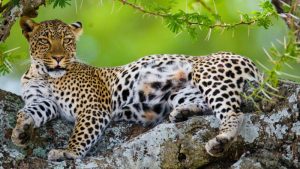 The most striking aspect of the northern Serengeti is how ample the wildlife here is. Around every corner is something new to be discovered, and dare I say after two days we lusted after something more than just lions! Our guide obliged by discovering a mother cheetah with cubs in tow feasting in a small antelope, and a lioness lazily playing with her cub under a rocky arch.

Ayoub, the Asilia Africa guide dedicated to our group during our stay, was not only knowledgeable, but also extremely funny. He could just as quickly point out a small, brightly-coloured lizard as he could crack a witty joke about politics or tourists. His detailed descriptions were a highlight for me, enriching my safari experience while out on every game drive.

While the area is known for sightings of the rare black rhino, we sadly did not see any. We did however spot many smaller antelopes, birds and even insects endemic to the area. Each was named by Ayoub, and pointed out in a birding book. We even stopped to find certain species requested by the group, a great personal touch from Ayoub. 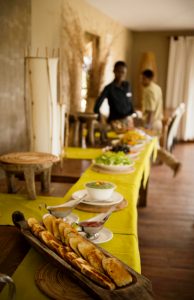 While out spotting wildlife on twice-daily game drives we were treated to snacks, hot drinks, and a refreshing sundowner at sunset. Back at camp we were served our fill of gourmet fare at every meal, ranging from delicate flavours during a light lunch, to a heartier meal at supper time.

Another distinction of staying at Sayari during the quieter months from December to June is that you’ll have an even higher level of personalised service. Activities on offer during these times, such as exhilarating and unique guided bush walks, be enjoyed in a secluded environment.

You should also take time to head to the nearest village, Merenga, to experience what life is like for the local residents of the Serengeti. Learn about the Kuria tribe, their culture, traditions and way of life. You can also stop off at the community vegetable garden, which is mentored and sponsored by Asilia, to collect seasonal produce to be included in your evening’s meal.

Other activities that shouldn’t be missed include spending some down time at the lodge’s rim flow pool, indulging in a signature spa treatment, or getting an aerial view over the Serengeti on a hot-air balloon safari.

To get more rates on and information about Sayari Camp, go to Asilia Africa’s website.