Ishay Govender-Ypma explores the creative heart of Durban, a tough city for artists.

Durban’s potential tends to bubble beneath the surface, not quite as bold and direct as Johannesburg or Cape Town. Durban is a laid-back city on many counts, and the art scene, which has been rumored to be burgeoning for the last decade, may be better described as simmering slowly. 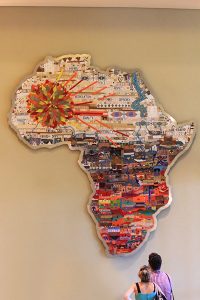 “Durban isn’t an easy city for creatives. But that isn’t to say the city isn’t home to some really staggering talent,” says Jonas Barausse of Street Scene tours.

To glean a little more context, I spend a morning with Carol Brown, a freelance consultant and curator who’s worked extensively with HIV/AIDS education, and is widely considered the doyenne of the Durban arts scene. Brown says that Durban has been an incubator, and continues to nourish a stable of young artists. However, unlike Cape Town and Johannesburg, there are fewer venues for the artists to display their works, and a smaller buying public to support them. Often, Durban’s artists spread their wings for the sake of opportunity and growth. One can’t live off an unsold painting or woven basket, after all. “The established creatives are hardcore. They’ve made a living in a city that can be largely apathetic. But there does seem to be a slow shift,” explains Jonas.

“Durban’s best art is often found in unexpected places,” Carol says, “not necessarily formalised spaces like other cities. There are gems here, just not the run-of-the-mill variety.”

Take the city’s architectural masterpiece, the striking multi-use Moses Mabhida stadium in Stamford Hill, built for the 2010 FIFA World Cup. Inside and around, a staggering 40 pieces of exceptional art by handpicked local artists show off some the city’s best talent. The almost 10-meter-long mural by Derrick Nxumalo, a landscape depicting the road from Durban to Drakensberg, which he worked on for roughly 20 years on and off, takes pride of place in the visitor’s centre on a wall specially built to accommodate it. 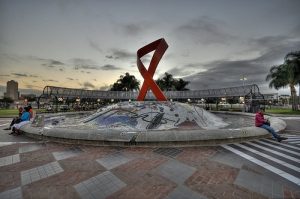 At the KZNSA Gallery in Bulwer Road, home to the KwaZulu-Natal Society of Arts where Carol and I enjoy iced coffee in the courtyard, roving exhibitions and events are held fairly regularly. The road-face of the building is covered in a black-and-white mural by artist Mook Lion, at the time. A democratiser of public spaces, graffiti and street art communicate stories and brighten spaces in a way that transcends the limits set by a more formal art scene. Carol insists that art needn’t be limited to the framed portraits and pedestal-mounted busts and sculptures often associated with wealthy buyers. Art, she says, constitutes small interventions to challenge opinions and viewpoints and broaden them. One thinks of the Gugu Dlamini Park in the heart of the CBD near the Workshop Shopping Centre, built in honour of the eponymous slain HIV-positive activist. Its giant HIV ribbon serves as a reminder of the tragedy and a symbol of hope to those living with the disease. The mosaic mural on which it’s built is a place for children to play and adults to reflect. The Wall of Hope is a dedication to Dlamini’s life and struggles, fusing public art and historical monument in an inspiring, thoughtful manner.

And street art too – from graffiti to wheat pasting and installations which can play this role very effectively – just think of the global works of Faith 47 and Banksy. 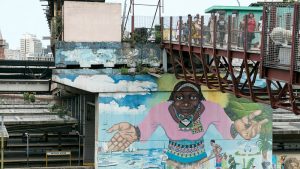 Street Scene ran its first graffiti tour in 2011 shortly after the arrest of a group of artists, “Aerosol 7”, who were apprehended by the police while working on a wall they assumed they had a right to. Jonas says: “A lot of debate was happening at the time about the difference between graffiti and vandalism. Along with our friend Ewok we put together a tour to inform people and provide some context for this art form. We didn’t intend to influence them, but rather provide a platform to ask questions, engage and understand some of its finer points.” The issue of legality comes into play as municipal by-law governing street art varies across the country. Street Scene takes visitors on a tour with a local street artist to uncover pieces from the south basin to Rivertown, of what they call, “their painted Poison City”. 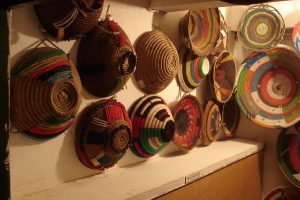 KwaZulu-Natal has a rich history of Zulu beadwork and basketry, traditional art forms tied to the culture. Beadwork has long held symbolic meaning for the Zulus. From love to grief, birth, marriage and death, the intricate combination of triangles and other shapes tell stories and communicate messages without the need for words. Cheap, colourful necklaces and bangles are sold by vendors around the beachfront and in various markets, popular with tourists. But the art form, in its purest sense is struggling. Beaders from rural Zululand work meticulously for up to a month on delicate neck pieces that the Eshowe museum sells for them – at R650 (roughly US$40), a steal by Western fashionista standards. American artist Liza Lou arrived in Durban in 2005 on a two-week project and has remained since, employing a group of 25 to 50 Zulu women beaders for her unusual installations.

From a talk in Basel, Switzerland, Liza explains that work, or sabenze, is essential to the women’s survival. “Early days when I tried to explain that I made things out of passion and not for money, they just shook their heads,” she said. “‘Who knows,’ they said, ‘That’s something for the whites’….it shamed me deeply to realize that they may have had a point. Over time and through the process of making work together, meaning started to unfold in the areas where they mattered most. Art provides jobs, builds houses and latrines and education.”

The late Reuben Ndwandwe, a basket maker from Hlabisa district, was known for this exceptional skill, weaving so tightly that the baskets became completely waterproof, using his signature diamond pattern, a contemporary interpretation of this traditional art. These crafts are usually passed down within families, and as the times have changed the art has lost its popularity. It’s labourious, and weavers need to transport the goods from rural villages with little infrastructure to the city to bring in any income. There are a limited number of Zulu baskets found at the city’s galleries. Collector Paul Mikula’s Phansi Museum in Esther Roberts Road has one of the best collections of Southern African artifacts, including rare baskets and beadwork. 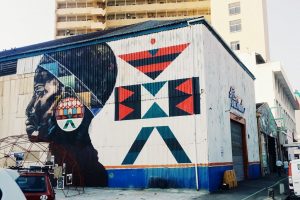 For artists who want to make it in Durban, Jonas and Carol remain positive. “I’d like to think Durban is on the cusp of a real creative explosion,” says Jonas. The Rivertown Precinct, brainchild of Jonathan Liebmann of the Maboneng Precinct in Johannesburg promises a similar style of rejuvenation for the city’s arts and culture scene. Who will really benefit though, remains to be seen.

Carol, who runs workshops to help artists craft their portfolios, tells me about some of the city’s most promising talent, like 23-year-old Wonder Mbambo who paints in the German impressionist style, and Karla Nixon, who constructs complex and intricate paper cut-outs. In order to encourage new artists, tourism authorities and the private sector must ramp up their efforts, she says, “There is funding available, but there are exhausting hoops to jump through.”

For Durban visitors wanting to take home some original art and a slice of local culture, Carol says you can’t leave the city without bagging a few quality items from Grace Kotze’s Loading Bay Gallery in the shiny new Station Drive Precinct, The Artisan Gallery and the African Arts Centre, both in Florida Road. Jonas recommends a leisurely browse at the I Heart Market and The Commune in Station Road for arty souvenirs. And for those First Thursdays fans, you’ll find the Design Factory in the Station Drive caters adequately to this whim.

Durban On A Budget: 15 Cheap Ways To Have Fun
How To Experience Durban Like A Local
City Guide: Durban, South Africa