If asked to describe Durban in one word, fusion comes to mind. “Durbs,” as the locals call this coastal city more than 1,600 km east of Cape Town, is a place where the old and new collide; where crumbling peeling buildings bump up against skyscrapers. It is also home to a long surf beach, and thanks to the largest concentration of Indians in South Africa, a multi-cultural vibe. At once gritty and posh, it feels like a real urban area: hot and sweaty and alive. A sporty city as well, Durbs got an overhaul before the 2010 World Cup, and is also home to an array of cosmopolitan restaurants, bars, hotels and shops, along with its sleek new stadium. 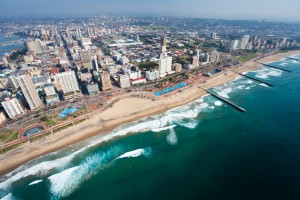 Beaches: With temperatures averaging about 70 degrees Fahrenheit (21 C) year-round and more than 300 days of sunshine, Durban’s prime attraction is its string of white sand, surf beaches that host warm-for-South Africa water. These are spread out along about a mile of coastline, known as the “Golden Mile.” Due to its location at the strip’s southern end, uShaka Beach offers a bit more shelter and is close to cafes and a small car park and home to shops where you can rent surf gear or sign up for lessons. Locals often create some really amazing sand sculptures on this beach, which have featured everything from starfish to elephants. The uShaka Marine World is also here, and is home to one of the world’s largest aquariums featuring the southern hemisphere’s most diverse collection of sharks.

Victoria Street Market: The Victoria Street Indian Market, at the western end of Victoria St, is a Durban tourist staple. Here you can pick up an assortment of spices, incense, embroidered fabrics and other curios. A walk through the nearby bustling streets is equally interesting – watch out for pickpockets. Grey St, between Victoria and West Streets, is the main shopping area. Prices are low and you can bargain. Check out the Zulu Mati Market for traditional medicine as long as you don’t have a bad gag reflex – the smells and sights of animal parts can be a bit intense.

Durban Botanical Gardens: Durban is also home to Africa’s oldest surviving botanical gardens, which houses one of the top “living fossil” planet collections on earth. In case you aren’t familiar, these are pre-dinosaur (as in 250 million years old) seed-producing plants known as cycads that are facing extinction in the wild.

BAT Center: On the Victoria Embankment, the BAT Centre is well worth a visit. It is a venue for artists of various mediums, and you should devote at least an hour to wandering around the shops and studios in this funky place, and chatting with the artists. All the work is for sale and most of it is quality. When you’re finished, grab a bite to eat and a drink at the house restaurant.

Sharks Board Boat Tour: Durban’s beaches, along with those in KwaZulu Natal province, are South Africa’s only to be protected by shark nets and drum lines. These are maintained by the KwaZulu Natal Shark Board, which is tasked with keeping surfers and swimmers safe as well as working with the public to education them about shark biology and behavior. You can join an early morning boat tour with the institute’s crew to see how shark nets really work as well as the environmental impact these nets can have – not only sharks get caught in them, for instance. It’s a cool experience where you’ll learn about the safety measures the province is taking and also likely see other marine animals like dolphins and rays.

Durban has hotels for all budgets. At the top end of the sphere is the five-star Oyster Box, which offers fabulous views from its infinity pool. Rent a villa for your own plunge pool experience here. For something more affordable try Blue Waters, which is on the waterfront but away from the crowds along the Promenade, and offers classic rooms that feel slightly dated, but are clean and a good deal. There are also plenty of backpacker hostels around town for budget digs. Try Hippo Hide, which has private room options and a cool rock plunge pool (although the location isn’t so hot these days).

The city’s most famous dish is known as “bunny chow” (half a loaf of bread hollowed out and filled with curry), and you must try it at least once while in town. It’s very cheap and filling and can be purchased at street stalls. For a sit down meal, head to Market, where the food is locally sourced, organic and free-range and the clientele trendy. South African and Indian fusion is the focus at Spice, in the Morningside hood, which has hosted everyone from Bill Clinton to Bill Gates.

Durban nightlife is focused around the Berea and Morningside areas, especially along Florida Road. There also are a few popular places on the beachfront and in downtown Durbs proper. 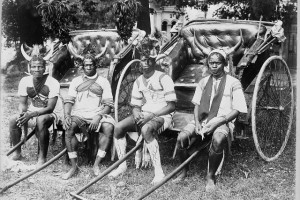 If you’re coming from outside South Africa, you can fly into Johannesburg, then hop a short flight to Durban’s King Shaka International Airport. It is served by various airlines including Mango Airlines, SAA, Kulula, and British Airways. Alternatively you can take a train from downtown Johannesburg (or other parts of the country). Shosholoza Meyl is a good, low-cost option, yet comfortable and punctual. Long-distance buses leave from various parts of South Africa and arrive at the bus station behind Durban’s train station. The Baz Bus, a backpacker bus, also comes through Durban on its Cape Town-to-Johannesburg route. Some cruise lines stop in Durban as well, but mainly local lines, not international ones.

Once you’re there, taxis are the usual option, though some choose to rent cars. Taxis are metered and must be called in advance, as they are not allowed to solicit fares on the street. Rental cars can be hired at the airport, at major hotels, or at various offices throughout the city. Durban is also famous for its iconic Zulu Rickshaws, which were once prevalent throughout the city, but now only 25 or so remain, primarily as a tourist attraction.

Most of the violent crime in Durban is confined to the poor townships outside the city, where tourists rarely venture. But some crime does exist in the city center. To stay safe, avoid walking alone in dark and deserted areas, especially back alleys off the main beach area. The Point Road area, between downtown and the port, is also iffy day or night. Only carry as much cash as you’ll need for the day or night and leave your credit cards, passport, and valuables in the hotel – no need to flaunt your wealth. When in crowded areas keep an eye out for pickpockets and also street children, some of whom have been known to carry knives.

Location: Durban is located in KwaZulu Natal province, on the southeastern coast of South Africa. It is on South African Standard Time, which is two hours ahead of Greenwich Mean Time (GMT).

Weather: The weather in Durban is hot and humid in the summer (average 24C/75F) and pleasantly warm and dry in winter (average 17C/63F), and frost-free.

Tips on Health, Safety, and Money