The tropical, laid-back coastal city of Durban in South Africa’s KwaZulu-Natal province has a lot to offer visitors, from miles of golden sandy beaches and the beautiful year-round warm weather, to a mixture of colonial and art deco architecture and cultural diversity.

The same group of attractions — namely uShaka Marine World, the Golden Mile (a mile-long stretch of beachfront) and Moses Mabhida Stadium — make it to the top of most tourists’ itineraries, so if you want to beat the crowds and get a taste of what locals do for fun, here’s what you should do instead.

Durban is famous for its deliciously spicy Indian curries, and undoubtedly its most famous curry dish is the locally invented bunny chow. Despite what its name suggests, there are no dead rabbits in this meal – it’s a hollowed-out loaf of white bread filled with curry. As you eat the curry, you use the bread to scoop it up. There’s an ongoing lively debate amongst locals about where the best bunny chow spot in town is, but many agree that it’s Goundens, an unpretentious family-run eatery in Umbilo Road (the spicy mutton bunny is what the locals recommend). For a late-night chow, join the queue outside Sunrise Chip ‘n Ranch in Overport at 3am, which is where Durbanites head after a night on the town to munch on bunnies and carbo-licious double-French-fry-and-cheese rotis.

Go on a tour

Taking a guided tour sounds like it belongs on a touristy guidebook to-do list, but not when it’s with Street Scene. The young Durbanites who run the tour company want to show visitors different sides to their city – the ones not covered in Lonely Planet. Learn about the history of Durban on a downtown tour, which includes a bunny chow lunch, drink with locals on a shebeen-hopping tour (shebeens are unlicensed bars found in townships) or explore a township and have a traditional shisha nyama (meat barbecue) lunch at a tavern.

Hang out at the market

Join throngs of locals browsing local designs of art, craft and jewellery as well as artisanal food at the I Heart Market, which is held on the first Saturday of each month at Moses Mabhida Stadium.

The Litchi Orchard Market, which is a 40-minute drive north of Durban in Salt Rock, is definitely worth the trip. The market is held in a litchi orchard during the day on the second Saturday of each month and at night on the last Friday each month, and is full of stalls selling delicious homemade food such as cupcakes and curries, breads and pancakes, organic fruit and veggies, antiques, photography, jewellery and pottery. There’s also live music. If you visit in December don’t forget to buy some farm-fresh litchis!

Soak up some café culture

Corner Café in Glenwood is one of the city’s most popular hangouts, a hip neighborhood café with great organic food (think falafel wraps, chorizo and black olive penne and interesting salads) and coffee (their fair trade house blend was sourced by the owner), friendly staff and an eco-conscious drive behind it all. There’s a vegetable garden out at the back, where salad ingredients are grown, a worm farm fed by leftovers from the kitchen and even the cappuccino machine is wind powered. The Corner Café also regularly hosts stand up comedy evenings – a great chance to check out the local talent. 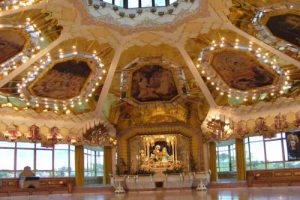 Take time out in a temple

The Sri Sri Radhanath Temple of Understanding in Chatsworth is probably one of Durban’s more unusual looking buildings – designed in the shape of a lotus plant, it bears more than a significant resemblance to a space ship. The Hare Krishna temple welcomes people of all faiths, and it’s a quiet space to take a bit of time out from the city. Downstairs there’s a fantastic (and cheap) restaurant, Govindas, which serves tasty Indian vegetarian food.

Nothing says living like a Durban local than hitting the surf in the golden light of the early morning with the other surfing addicts. The sun rises early here (before 5am in summer), and many Durbanites get a few waves in before work on weekday mornings. If you’re a newbie, take some lessons with Learn 2 Surf, a surf school located just north of uShaka Marine World on Addington Beach.

A hidden natural oasis in the heart of the city, the Kenneth Stainbank Nature Reserve offers the unusual highlight of seeing African wildlife against a backdrop of high-rise buildings. The reserve preserves 253 hectares of coastal forest and grasslands inhabited by zebra, bushbuck, reedbuck, impala, duikers, mongoose, bush babies and monkeys and home to more than 200 species of birds. Amble along the eight miles of trails, stop off for a picnic at one of the sites or hit the challenging six-mile long mountain bike trail if you need a dose of exercise.

Catch a concert in a garden

During the summer months, each Sunday in Durban Botanic Gardens, a lush green wonderland of towering trees and miles of plants, there’s a concert featuring South African musicians across a range of genres, from the choral group Ladysmith Black Mambazo to the chilled out indie sounds of solo artist Jeremy Loops. Bring a picnic blanket, a basket full of snacks and a bottle of wine and enjoy local music in a beautiful setting.

Get your caffeine fix

For the best coffee in town, look no further than the Factory Cafe in Magwaza Maphalala Street. Housed in an old factory with high ceilings and a cool industrial-chic look, the café’s coffee is made with beans roasted on the premises (which produces the most amazing rich aromas) by sister operation Colombo Coffee. Choose from the Sweet and Clean (a fruity blend), Aggressive Chocolate (a stronger blend) or Fedora Classic (Italian-style) espresso blends, or single origins from Colombia, Ethiopia, Burundi, Indonesia, Guatemala, Costa Rica, Brazil and Honduras and accompany your cup with a bite – the menu features tasty treats like chocolate brownies with cream cheese icing, zucchini, hummus and eggplant sandwiches and Indonesian chicken stir fry. The café also hosts comedy nights and live music gigs with Durban’s up and coming bands.