I first came to Johannesburg, or Joburg, on a three-day business trip in July 2008. During that trip I visited the Apartheid Museum, had dinner in Parkhurst and Melrose Arch, and bought souvenirs at the Rosebank African Craft Market. It was a pleasant trip. But I gained little insight into the city’s soul. 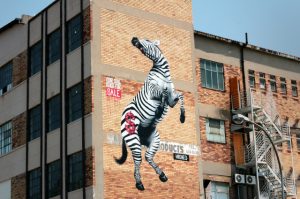 I read very little about Johannesburg before my move. Expat relocation websites yielded only negativity: stories from South African diaspora explaining – in painstaking detail – the horrific crimes and crumbling infrastructure that had driven them to leave in the 1990s and early 2000s. Thick South African travel books included only a page or two about Johannesburg, the country’s largest city. My boyfriend at the time, a lifelong Joburger, told me I would probably hate the city and suggested we relocate together to Cape Town instead.

I moved to Joburg anyway.

Joburg, also called Egoli, or the City of Gold, was founded during a gold rush. People still come here from all over the world to hustle and earn a quick buck. But there’s another side to this frenetic city. If you really want to get to know Joburg then it’s best to explore it slowly, in ever-widening circles.

I arrived in Joburg without a job, an agenda, or any plan to leave. I could take my time exploring. So I started in my backyard.

Nature is the first thing I noticed. Johannesburg has a reputation as a gritty, crime-ridden, concrete jungle, but the reality is quite the opposite. With the exception of the compact, high-rise-laden city center, Joburg is a massive sea of trees. Palm trees, oak trees, acacia trees, jacaranda trees, plane trees, and countless species of aloe. Wisteria and bougainvillea vines twine themselves everywhere. Birds abound. I sat on my deck and watched hook-beaked, silver-purple ibis – called hadedas – pick their way through the garden and then flap off in a cacophony of squawks.

I began to explore my own neighborhood. Melville, an inner suburb northwest of downtown, is known as Joburg’s little Bohemia, offering quaint shops and cafés by day and raucous bars and restaurants by night. I walked up and down Melville’s 7th Street, drank coffee, and browsed antiques. I climbed the Melville Koppies, a hilly nature reserve with swishing brown grass taller than I am. I went to the highest point on the Koppies, which overlooks the iconic downtown Joburg skyline. That skyline was my next destination.

Tentatively, I ventured into town. In 2010 and 2011, parts of downtown Joburg were just beginning their transition from dangerous “no-go” zones to rejuvenated urban meccas. I went first to Market on Main, the Sunday morning market in fashionable Maboneng Precinct. Then I investigated the Carlton Centre, the tallest building in Africa, and the pedestrianized central mining district on Main Street, lined with public art.

I visited Ponte City, the notorious, cylinder-shaped skyscraper in Hillbrow. I took walking tours through Soweto and the culturally rich neighborhoods of Fordsburg, Troyeville, and Yeoville, feasting on Indian, Portuguese, West African, and Ethiopian food. I shot hundreds of photos of graffiti. I rode a bicycle through Alexandra Township and sat in on a Zionist Christian Church service, watching a kaleidoscope of men in colorful satin tunics swirl around me to the beat of a drum. 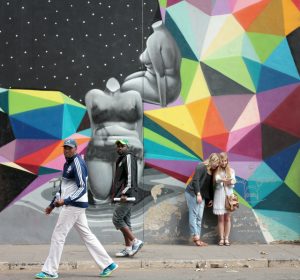 I stumbled upon a Muslim bakery in Fordsburg, built into the ruins of an old Lebanese Orthodox church. I discovered a used bookshop in the attic above a garage in Orange Grove. The owner, one of Joburg’s top rare books collectors, sits on a wing chair surrounded by piles of books and invites visitors to drink tea with him. I found a brilliant Rastafarian chef selling vegetarian food out of a tiny cubicle on Rockey Street.

The more I explored Joburg, digging into the cracks and corners and talking to people, the more I came to love it. Along the way I met people who went out of their way to befriend me, inviting me to parties and photo walks and gallery openings and coffee dates. People told me their stories and were delighted when I wanted to tell those stories to the world. The best thing about Joburg is its people.

Life isn’t easy in Joburg: The beggars at every traffic light and the persistent petty crime are testament to that. Joburg houses beauty and wealth and quirkiness and hope; it also houses poverty and suffering and cruelty and pain. Joburg is an imperfect place, filled with contrasts and contradictions and impossible challenges. Those challenges make me love the city even more.

The greatest love affairs are the ones that grow slowly, evolving bit by bit, so gradual that you hardly notice. Loving Joburg takes time. For me, the time has been worth it.

More reasons why we love Johannesburg: