When someone mentions the Congo River, it often conjures up images of unexplored areas of Africa where few tourists ever venture. Others might remember reading the journey up the river in Joseph Conrad’s Heart of Darkness. Whatever you have in mind when you think of it, there’s probably a lot about it that you don’t know, especially when compared to rivers like the Nile or the Amazon. But that’s too bad, because even though the Congo might not be as famous as them, it still deserves some attention. Here are 10 things you didn’t know about the Congo River.

Central Africa’s roads and train tracks are easily outdone by the mighty Congo River. It certainly doesn’t help that much of the area in the Congo Basin is difficult to navigate. The river and all of the streams leading into it total over 9,000 miles of shipping routes in the region.

However, it can be treacherous to navigate

Although the Congo River has the most navigable waterways in Africa, certain sections can be notoriously difficult to pass through. The river is littered with numerous waterfalls, including the famous Inga falls and Livingstone falls, along with plenty of dangerous rapids and islands that seem to pop up out of nowhere.

While Europeans had long been familiar with the Nile, it took until 1482 for the Congo River to be discovered. Portuguese explorer Diogo Cão was the first person to spot it and enter the area. He marked the river with a stone pillar at the entrance in an attempt to claim it for Portugal. He later returned and added two more pillars farther down the river.

It flows through 10 countries

While the Congo river is often associated with the DRC and the Congo Republic, its tributaries flow through a whopping 10 countries. The river starts near the east African rift and flows through Angola, Burundi, Cameroon, Central African Republic, Congo Republic, DRC, Gabon, Rwanda, Tanzania and Zambia.

While it isn’t exactly the Virgin Islands, the Congo River is still home to over 4,000 islands that seem to appear randomly in middle of the river. Over 50 islands in the river that are at least 10 miles long. These islands come and go as the path carved by the river is constantly changing. In fact, the current path of the river only formed around 1.5 to 2 million years ago, which is super young in “river years.”

Its basin is home to over 75 million people

The Congo Basin (the area around Congo River) has been populated for more than 50,000 years, long before the Europeans discovered it. The river and basin provide fresh water and food for over 75 million people, including around 150 distinct ethnic groups.

A river as large as the Congo is bound to have tons of fish in its water, literally. There have been 700 fish species recorded in the river. However, due to it being relatively uncharted, the real number is probably far higher. 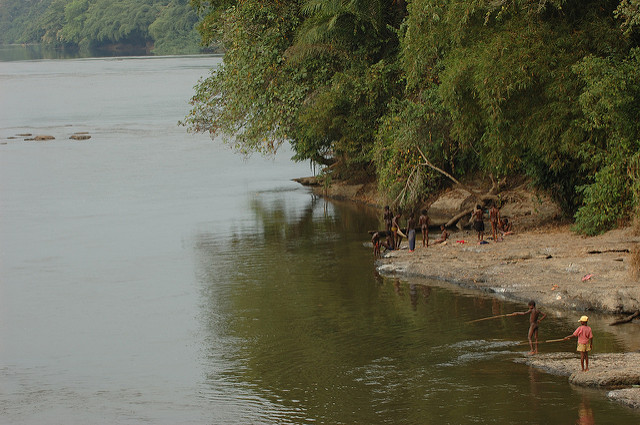 It’s the most powerful river in Africa

Move over Nile. The Congo River is super powerful and 1,400,000 cubic feet of water flows into the Atlantic Ocean every second from it. The power of the river hasn’t gone unnoticed, and there are 40 hydroelectric power plants lining the river that utilize the tremendous water flow to help provide power for Africa.

Not only is the Congo River the second longest river in Africa, it also has several other “river superlatives.” It’s the world’s deepest river, with depths going down to 220 meters (720 feet). It’s also the ninth longest river on the planet, measuring 4,700 km (2,920) miles long. That’s farther than driving from Washington, DC to San Francisco!

It used to be the Zaire River

Millennials might not know it, but the river was known as the Zaire River for a brief period before being changed to the Congo River. People called it the Zaire River from 1971 to 1997, until Zaire changed its name to the Democratic Republic of Congo (DRC). Prior to that, it used to go by the Rio Congo, derived from the Kingdom of Kongo.

The Muddy Heart Of Africa: A Traveller’s; Guide To The Republic Of Congo

This article was originally published on October 20, 2015.