“You’re going where?” my wife asked, in a tone that indicated she was less than thrilled. 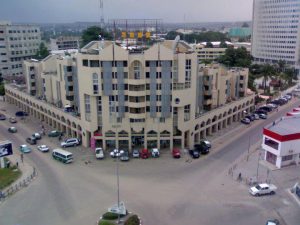 Truth be told, my first visit to either bank of the Congo River had sent a tingle down my spine. Far from the cosmopolitan pavement cafés of Cape Town, or laid-back beachfront bars of Maputo, this felt like the real Africa. This was an “Africa” for James Earl Jones to do the voice-over; the corner of the continent Joseph Conrad immortalised in ‘The Heart of Darkness’.

But before we go any further, let’s get our Congos straight. To begin with, picture the Congo River as a great artery bleeding water away from the heart of Africa. The world’s deepest river – plunging to 220 metres in places – and the second largest after the Amazon, it’s an immense highway of H20 that flows through 10 countries along its 4700 kilometre journey to the sea. In places it is a country of its own, supporting villages on its banks and communities in its wake.

The Congo River is also the dividing line between two countries, bisecting the capitals of Kinshasa and Brazzaville. Rough-and-tumble Kinshasa, on the southern bank, rules over the Democratic Republic of Congo, a country sadly more famous for its warlords and civil strife than its remarkable wilderness and natural parks.

North of the river however, lies the Republic of Congo. Its capital Brazzaville, an altogether more relaxed city of just under two million souls, one-fifth of its southern neighbour.

It was this Congo I jetted into one warm October morning, our SAA flight delivering us from cool Johannesburg to the steamy streets of ‘Brazza’ in just over four hours. Passport control was a textbook study in surly bureaucracy, but once through the doors there were only smiling faces to be seen. 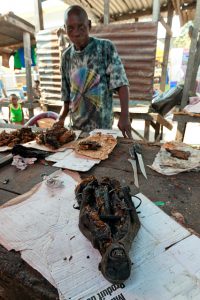 Perhaps it’s the history as a French colony, or the fact that relative peace has reigned north of the river since the civil war ended in 2002, but unlike many African capitals Brazzaville has a relaxed air about it. Don’t believe me? Just take a wander through the bustling Poto Poto market.

Although few locals speak English – you’ll need an interpreter or a good command of French to get by – there’s no shortage of smiles and handshakes. While the occasional shopkeeper will wave you away with a scowl, by and large you’ll be welcome.

And it’s well worth a wander. The streets of Poto Poto are lined with fabric shops, even if much of it is imported from China, while the surrounding stalls throw up everything from streetside banana doughnuts to take-away joints offering freshly grilled goat. As the sun sets, find a local tavern and order a cold Ngok’, the local lager.

Poto Poto is one of the highlights of Brazza, in a city not overflowing with tourist distractions. Tourism is in its infancy here, meaning you’re spared the scheming touts, but may find yourself wondering what to do next.

My advice? Hail a taxi and ask for “Les Rapides.”

The rapids on the outskirts of the city show a different face to the broad, placid Congo River. A laid-back bar overlooks the dramatic white water formed as the river funnels through a rocky channel. While the rapids are a highlight, it’s also a great place to watch the locals making the most of the river, from fishermen casting their nets to young boys swimming and showboating for tourist cameras.

You’ll find few cameras inside the mesmerising Basilique St. Anne’s though. Built in 1949 by French architect Roger Erell, its eye-catching architecture is all the more striking indoors; large stone ribs soar to a narrow ceiling where skylights flood the church in natural light. Opening hours can vary, so it’s best to visit on a Sunday morning if you’d like to step inside.

The dearth of tourists means opening hours can be unreliable at most of the city’s sights, not least the Brazza Memorial; the final resting place of the city’s founder. Italian explorer Pierre Savorgnan de Brazza lies in a mammoth marble mausoleum on the banks of the Congo River. The memorial is meant to be open from 9am-6pm daily, but times may vary.

The mighty Congo River itself is worth a look, and if you don’t make it down to Les Rapides your best bet is to book a terrace table at Mami Wata, arguably the finest restaurant in Brazzaville. Don’t expect fine dining, but on most nights the tables here resonate with the chatter of the city’s expat community and local luminaries enjoying bistro-style cuisine to the soundtrack of a Congolese jazz band. The food is good; the waiters charming in an old-school way, and the beers are cold. Most importantly, you can see clear across the Congo River to Kinshasa some four kilometres away.

If you’re in town for a few nights, it’s also worth sampling the French-influenced fare at Restaurant Orchidée, or the Vietnamese buffet spread laid on at Hotel Hippocampe on Friday and Saturday nights.

Hotel Hippocampe is a popular stop for overlanders and budget travellers, but in a city short on top-end hotel offerings your choices for four- and five-star properties are few and far between. 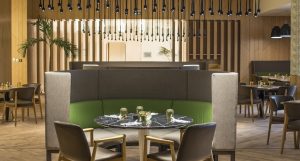 Mikhael’s Hotel is the city’s best boutique option, offering an in-house restaurant, outdoor pool, fitness centre and complimentary airport transfers. However, the new Radisson Blu M’Bamou Palace Hotel is perhaps the best address in town, with international-quality rooms and services that include free Wi-Fi, a choice of restaurants and bars, and a modern wellness centre. Most rooms overlook the Congo River.

The opening of the Radisson Blu is perhaps a sign of things to come. As travellers – corporate and leisure – discover the delights of the Congo north of the river, tourism is set to grow. With its dramatic riverfront and relaxed charm, it’s a city well worth a visit on your way to the coastal resorts of Pointe Noir or the rainforests of the north.

The Muddy Heart Of Africa: A Travellers’ Guide To The Republic Of Congo

Mysterious Waters: 10 Things You Didn’t Know About The Congo River