Those were the words joyfully yet exhaustedly uttered by 21-year-old South African Michaela ‘Chaeli’ Mycroft on September 3, when she became the first female quadriplegic ever to summit Mount Kilimanjaro.

At 08:00 Tanzanian time, Chaeli and her team reached the summit after two years of planning, nine months of in-depth preparation, and seven days of intense climbing. 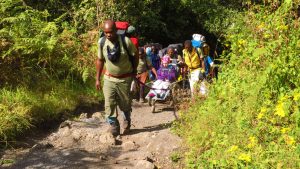 On August 29, in the early hours of Saturday morning, Chaeli and seven unique individuals known as the ‘Chaeli Kili Climbers’ – took the first steps towards making history when they started their ascent of Kilimanjaro via the Rongai route, which is the gentlest, quietest and driest of the seven routes up the mountain.

The expedition was anything but easy. They faced challenges such as altitude sickness, temperatures that fell below freezing, and the constant need to make sure Chaeli was warm enough and could breathe well in the thin mountain air.

When they reached the 3700m and 4750m marks respectively, two climbers had to be sent back down the mountain due to altitude sickness (they are now both recovering well). The remaining team members pushed on to the summit run and left Kibo camp – the final checkpoint before the summit- at 23:00 on September 2. Nerves were high back home, and all eyes were on the microsite which followed the team’s progress.

After some communication and weather delays, the base camp team finally got word that the climbers had successfully summited. They celebrated briefly at the peak, then spent the next day getting safely down the mountain. 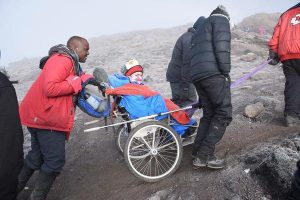 Chaeli, who has cerebral palsy and used a specially designed ‘mountain wheelchair’ for the climb, has now joined the narrow ranks of ambitious mountain climbers who have reached the top of the highest peak in Africa. In doing so, she accomplished what many people thought would be impossible. But she never doubted herself. An ability activist and co-founder of The Chaeli Campaign, Chaeli was determined to summit the mountain not only for herself, but to demonstrate that physical disabilities place no limitations on what one is able to achieve.

Born in Cape Town and a resident of Bergvliet in the Southern Suburbs, Chaeli is currently in her third year as a student at the University of Cape Town (UCT) where she is studying for a Bachelor of Social Sciences in Politics and Social Development. She has won many awards for her work raising awareness of disability including the International Children’s Peace Prize, the Social Activism Medal, and the World of Children Youth Award. She is also an accomplished outdoorswoman and sports enthusiast, having completed the 2013 Cape Town Cycle Tour, the 2014 Cape Town Gun Run, and won gold in the 2015 Wheelchair Dancing World Cup. 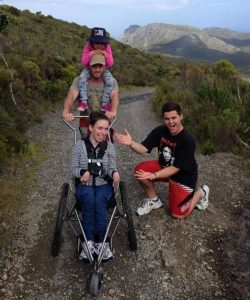 The Chaeli Campaign was founded in 2004 by Chaeli and her sister Erin, together with lifelong friends Tarryn, Justine and Chelsea Terry. Their aim was to raise funds to get a motorised wheelchair for Chaele. They achieved this goal in seven weeks, raising R20,000, which convinced them to start a non-profit organisation and continue to help other children with disabilities throughout South Africa. The charity works towards inclusion and growing an awareness of the ability of people with disabilities through its Inclusive Education Programme and the Chaeli Cottage Inclusive Pre-school and Enrichment Centre.

Chaeli’s entire climbing team supported the initiative by funding their own climb and helping to raise funds for The Chaeli Campaign.

To prepare for the climb, the team spent a considerable amount of time at the Altitude Training Centre in Constantia, Cape Town. The goal was to see if she would acclimatize at an acceptable rate, and she achieved this comfortably, giving her and the rest of the team the best chance possible to get to the summit of Kilimanjaro. They also did several training climbs at mountains around the city.