If you think climbing Mount Kilimanjaro is tough, imagine summitting it in a wheelchair.

On 27 August 2015, South African woman Chaeli Mycroft, an ability activist with cerebral palsy, will start her quest to become the first female quadriplegic to climb Kilimanjaro — along with a team of six committed climbers from South Africa known as the Chaeli Kili Climbers.

She hopes the climb will help raise R1 million in support of The Chaeli Campaign, the Inclusive Education Programme, and The Chaeli Cottage Inclusive Preschool and Enrichment Centre. 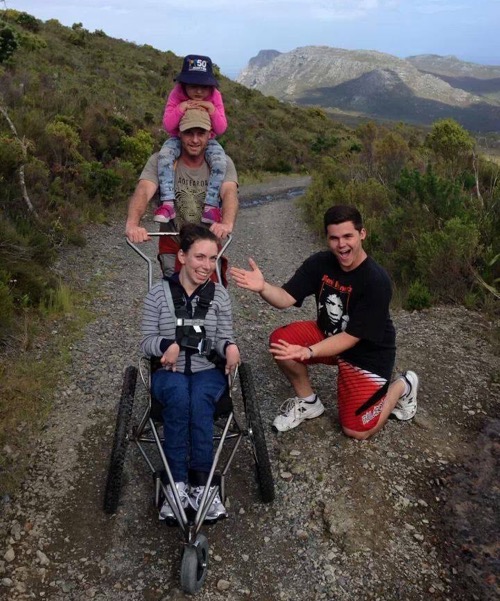 The Chaeli Campaign was founded in 2004 by Chaeli and her sister Erin, together with lifelong friends Tarryn, Justine and Chelsea Terry. Their aim was to raise funds to get a motorised wheelchair for Chaele. They achieved this goal in seven weeks, raising R20,000, which convinced them to start a non-profit organisation and continue to help other children with disabilities throughout South Africa. The charity works towards inclusion and growing an awareness of the ability of people with disabilities.

20-year-old Chaeli — who will celebrate her 21st birthday during the climb — was born was born in Cape Town and is from Bergvliet in the Southern Suburbs. She is currently in her third year as a student at the University of Cape Town (UCT) where she is studying for a Bachelor of Social Sciences in Politics and Social Development. An accomplished activist, she has won many awards for her work raising awareness of disability including the International Children’s Peace Prize, the Social Activism Medal, and the World of Children Youth Award. She is also an accomplished outdoorswoman and sports enthusiast, having completed the 2013 Cape Town Cycle Tour, the 2014 Cape Town Gun Run, and won gold in the 2015 Wheelchair Dancing World Cup.

After five years of mulling the idea over, In August 2015 Chaeli gathered a team of “conquerors” to climb Mount Kilimanjaro, with the aim to show how important it is to work together to attain a seemingly impossible goal. Her goals are to show that one’s physical disability places no limitations on what one is able to achieve, and to change society’s perception of people with disabilities.

To prepare for the climb, Chaeli and her team spent a considerable amount of time at the Altitude Training Centre in Constantia, Cape Town. The goal was to see if she would acclimatize at an acceptable rate, and she achieved this comfortably, giving her and the rest of the team the best chance possible to get to the summit of Kilimanjaro. They also did several training climbs at mountains around the city, using the special wheelchair made for Chaeli by Chairman Industries. The custom-designed device can withstand Kili’s rugged terrain and extreme temperatures.

Chaeli and her team plan to climb the mountain via the Rongai route, which is the gentlest, quietest and driest of the seven routes up Kilimanjaro. They will post daily updates about their climb directly from Kilimanjaro between 27 August and 4 September 2015, which can be seen on the Discover Africa website. The updates will explore the challenges in eating, communicating, hygiene and staying warm that Chaeli will no doubt face due to her disability.

Chewing and swallowing can be difficult for her, so plenty of soft foods and liquid sustenance will be carried up the mountain. The muscles she uses to open and close her mouth and move her lips and tongue also affect her speech, making communication difficult. It is not known whether the altitude on Kilimanjaro could affect her ability to express herself. Ensuring that Chaeli maintains her core internal temperature is also very important. The entire team’s cooperation, communication and planning for every step of getting dressed will help ensure she has very little exposure to the elements.