West Africa doesn’t get as much attention as spots in southern Africa for bird watching, but that’s more to do with the tourism industries in the countries, rather than the birds that can be found there. And if you’re keen on bird watching when visiting countries like Ghana, Senegal and Cameroon, there are ample opportunities and places to go. Here are the best places for bird watching in west Africa. 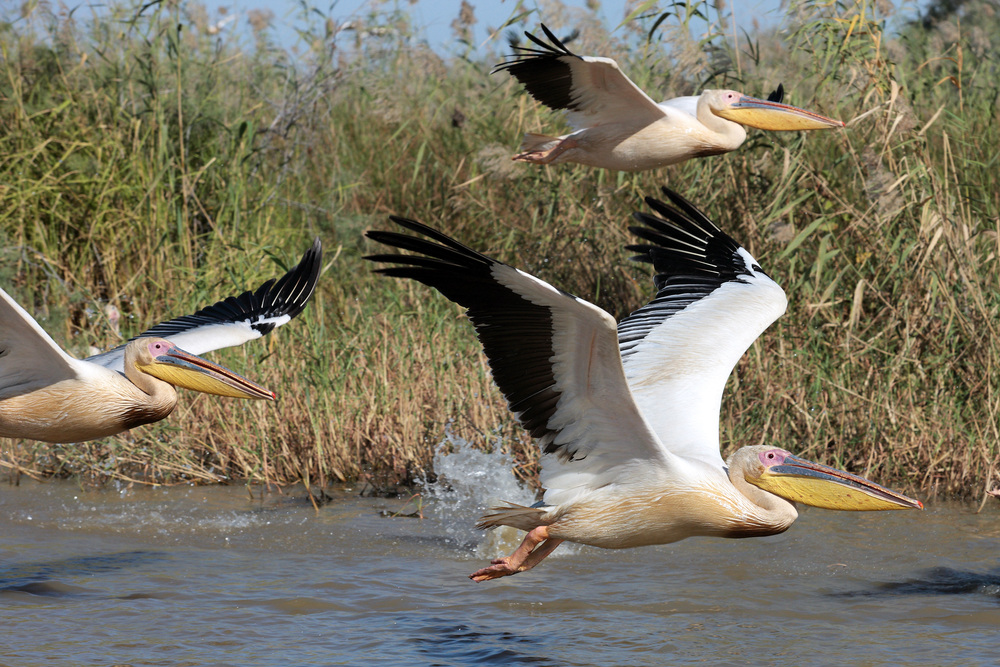 Recognized as a UNESCO World Heritage site in 1981, Djoudj National Bird Sanctuary is home to over 1.5 million birds, including 350 different species that spend the winter there. It’s also the third largest ornithological park in the world. The most famous and easiest to spot birds in the park are the numerous pelicans and flamingos. 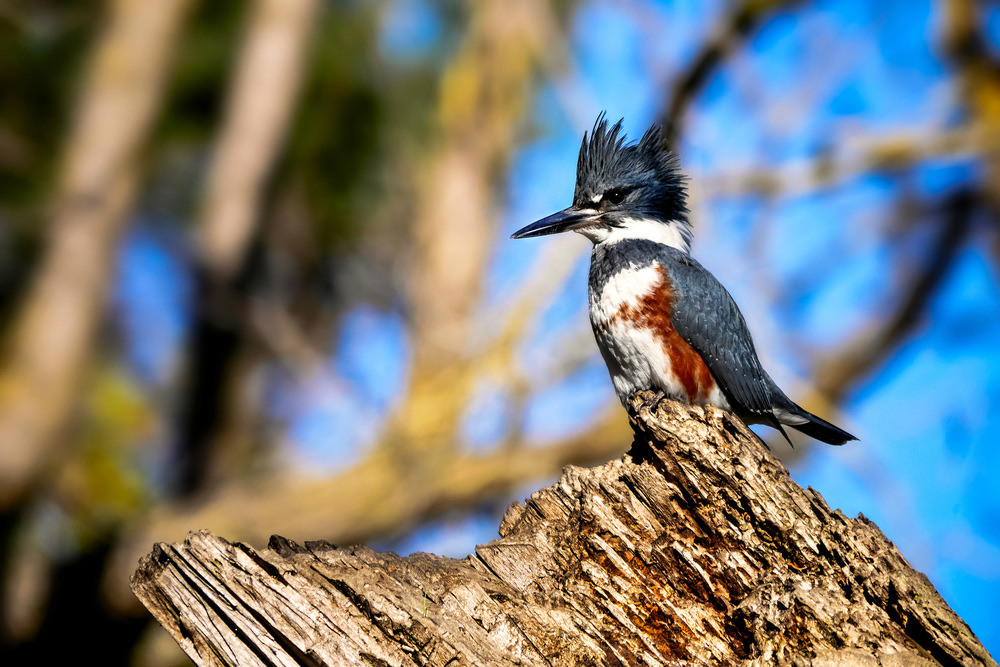 A kingfisher in Ghana (Shutterstock)

The Xavi Bird Sanctuary in the east of Ghana is one of the best places to watch birds in the country. The terrain of most of the sanctuary is wetlands and savannah, and guides can help you spot many of the species including, cuckoo birds, parrots and kingfishers. To get extremely close to the birds, opt to visit the area via canoe. 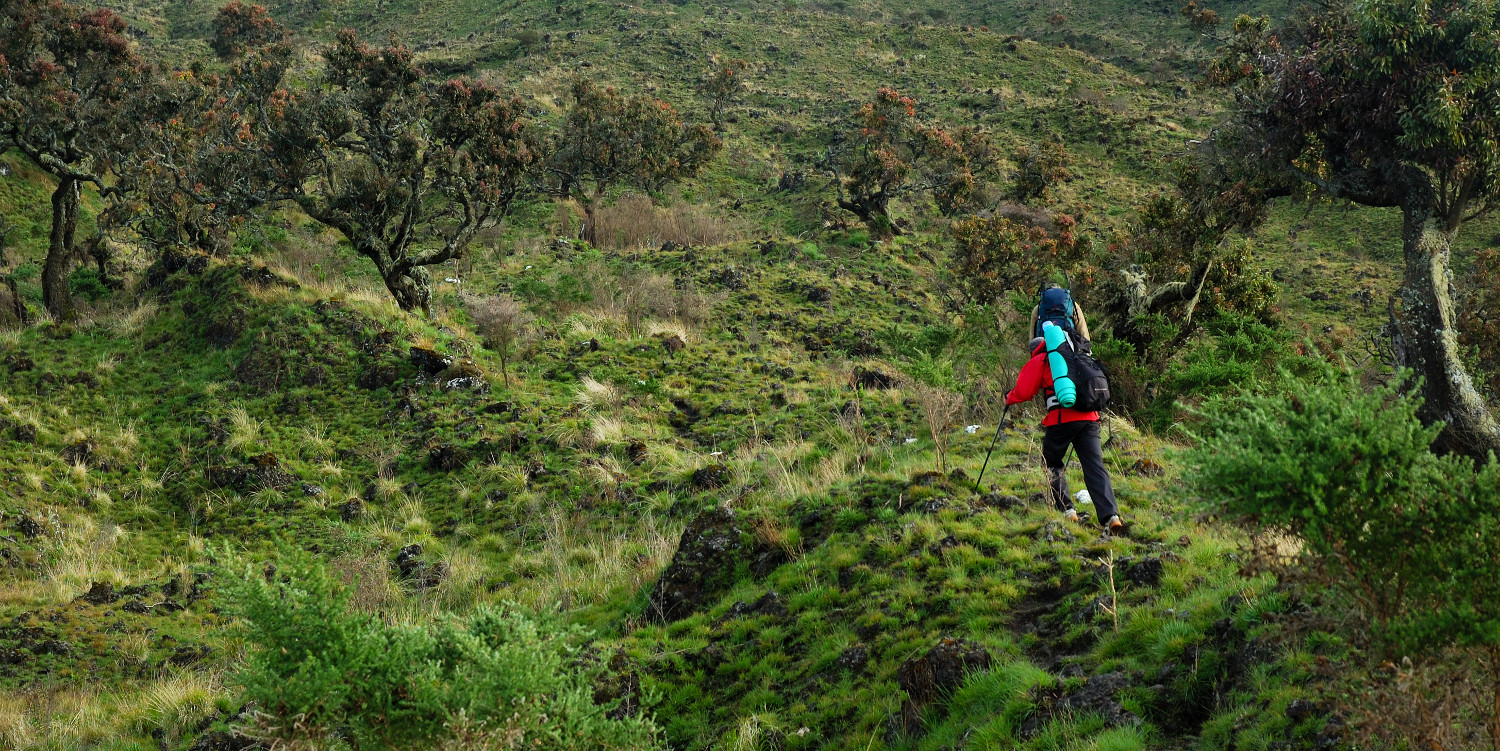 Mount Cameroon is one of the best places in west Africa to go birdwatching and also happens to be one of the most scenic. Hikers and bird enthusiasts alike will enjoy exploring the lush area. There are several endemic bird species restricted to the mountain including the Mount Cameroon Franklin and Mount Cameroon Speirops. If you want to go to the top while bird watching, a normal trek takes around three days. 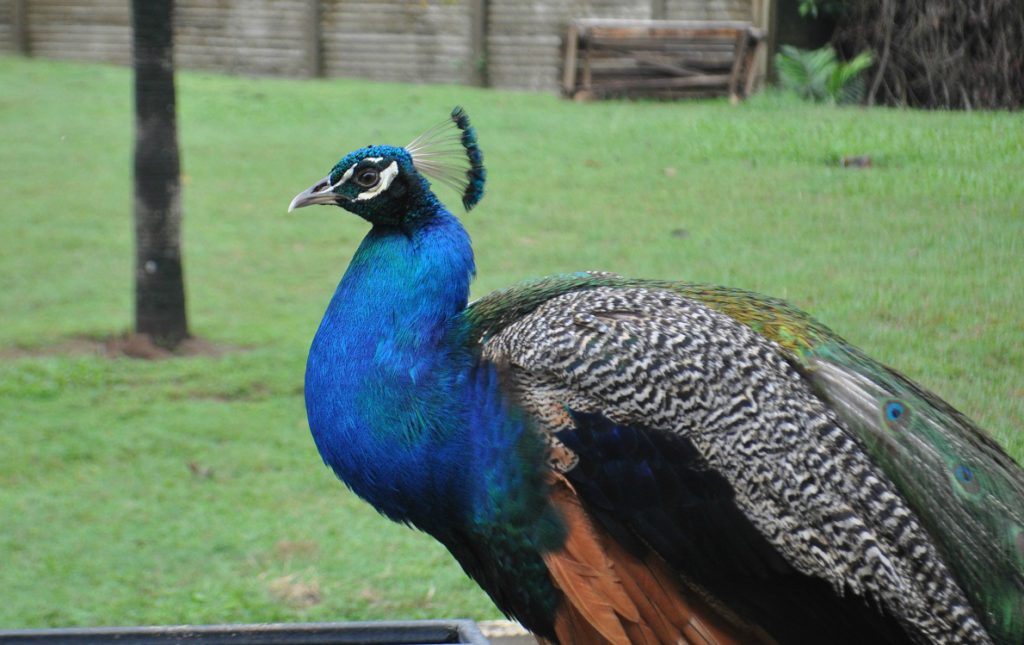 If there’s any optimal place to see bird life in Nigeria, then it has to be Lekki. While it’s rather small at only 78-hectares, it’s an easy taxi drive from anywhere in Lagos and offers ample opportunity to see the birds of the region. You can see plenty of weaver birds and ducks within the park, and peacocks roam around the grounds as well. Of course, a country the size of Nigeria is full of bird life, but the options for viewing them are limited. 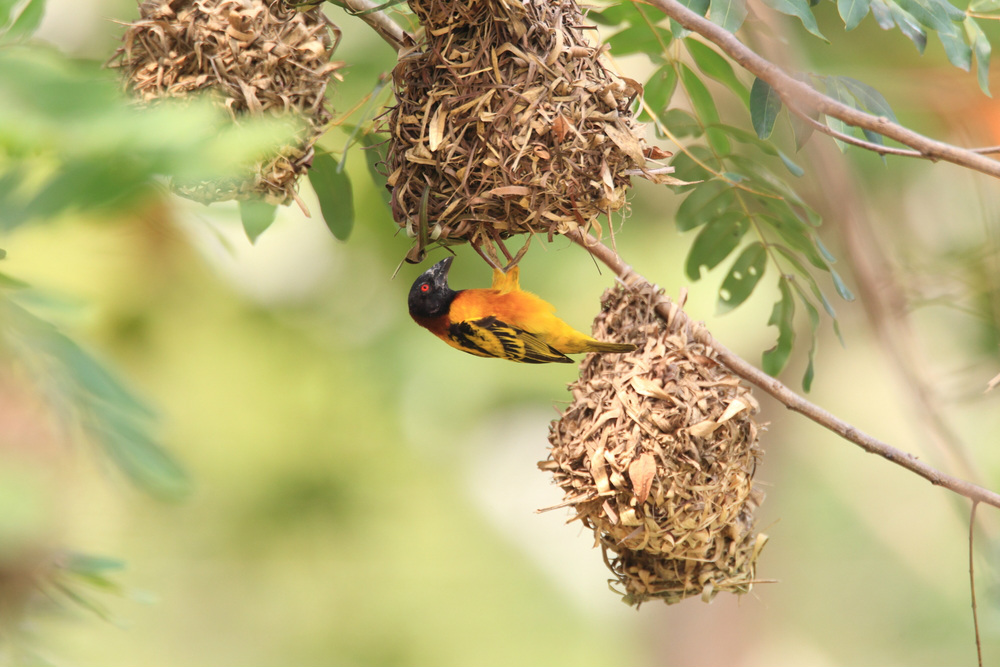 A village weaver in Ghana (Shutterstock)

Mole is probably the best place for wildlife viewing in the country, and that includes birds as well. There are around 330 bird species in the park, along with two large watering holes where birds and animals like to sit, making it easy to get photographs. Birds in the park include saddle-billed storks, grey woodpeckers, pygmy sunbirds, and more. Be prepared to go down a dirt road for awhile when traveling to the park.

Another Senegalese World Heritage Site, Niokolo-Koba National Park is fantastic for watching birds and is home to over 330 species. Inside the park you can find ground hornbill, tree ducks, eagles, bateleurs, and the violet turaco. The Gambia River also flows through the park, and adventurous travelers might want to take a canoe down it. 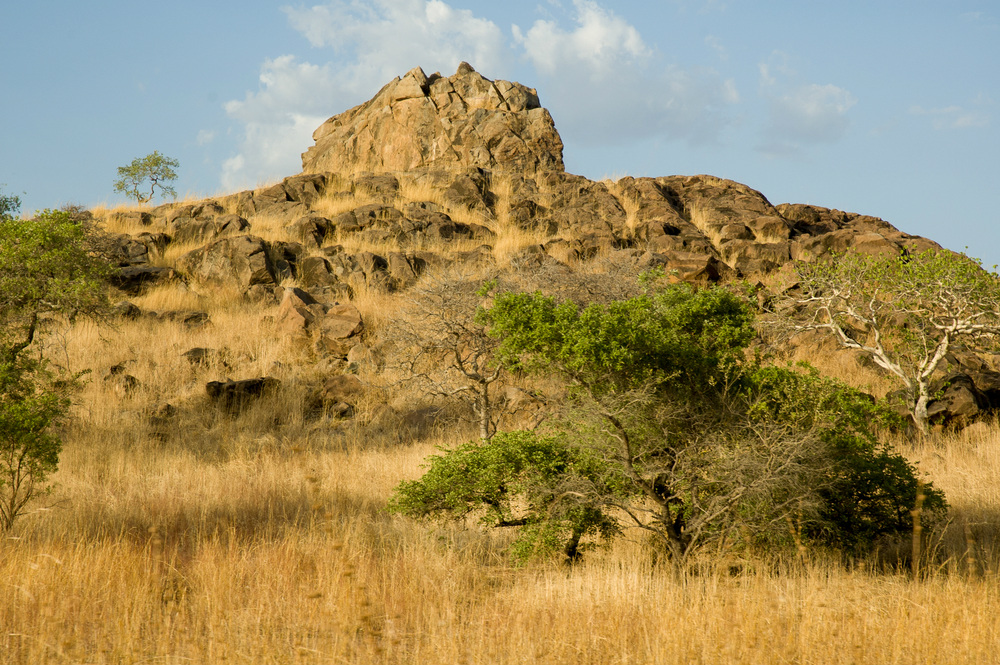 Located on the edge of the Sahel, Waza National Park is a great place to watch birds through the seasonal marshes and grasslands. The park is home to Abyssinian rollers, waxbills, snake eagles, helmeted guineafowl and much more. The park is only accessible via vehicle and the accompaniment of a guide. 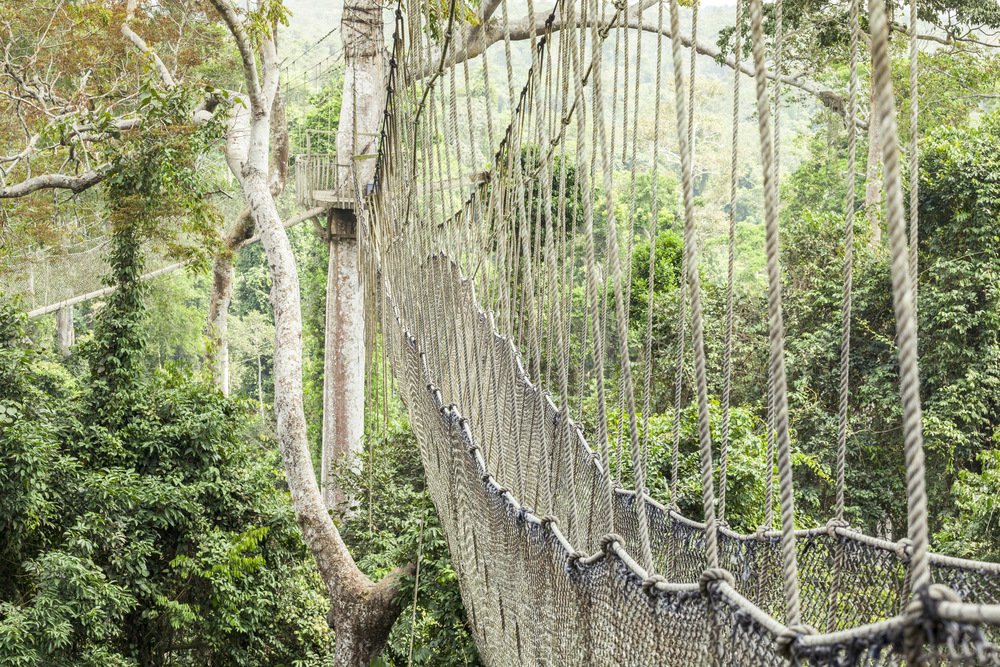 Just north of Cape Coast, this large park has a fantastic canopy walkway that makes it easy for birders to get a great view. In the park, you can find Upper Guinea Rainforest species like the copper-tailed glossy starling and yellow-billed turaco. Though definitely not a bird, the park is also known for sightings of the endangered long-tailed pangolin.

This national park on an island is home to ruins, pelicans, sea turtles and more. It’s also a great place to see birdlife if you can’t make it to Djoudj National Bird Sanctuary. Go in February, when many of the birds begin their nesting. The park is less than 20km from Saint-Louis, making for an easy day trip. 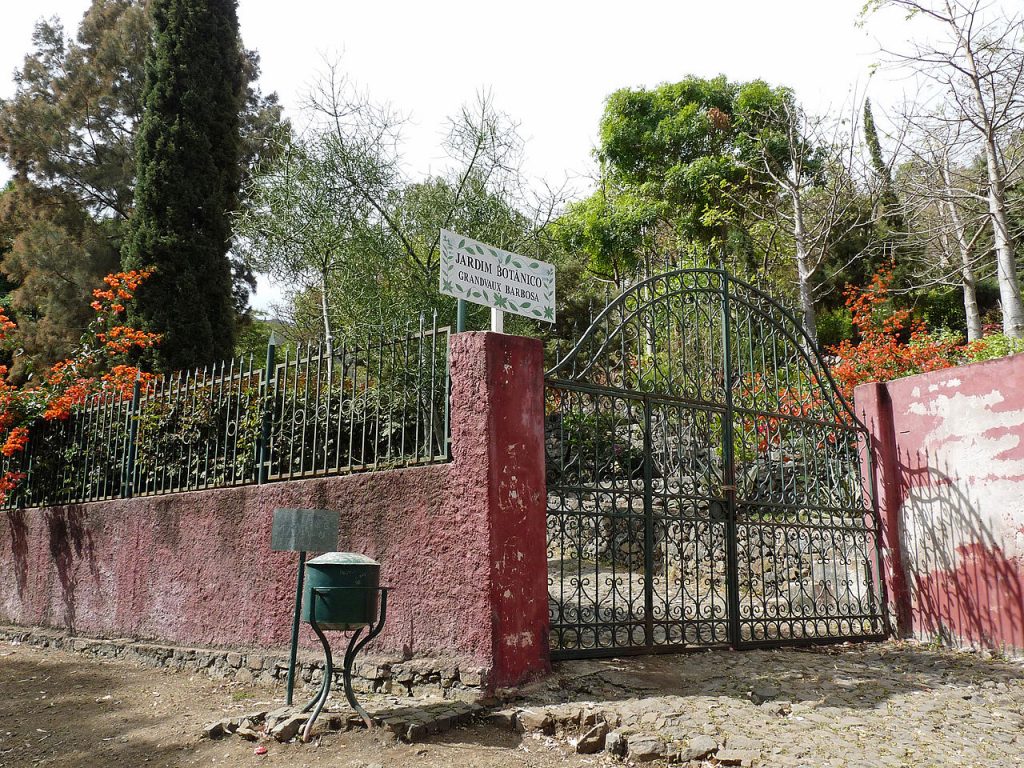 Of course, the places for bird watching above aren’t the only places to see bird life in west Africa, but are probably your easiest bets. Adventurous travelers have hired private birding tours in Sierra Leone, Guinea, and Ivory Coast, though much of these countries remains somewhat of a mystery as to what exactly lives there. And if you want to head off the coast, Cape Verde is an appealing destination with several endemic species native to the islands.

Going Off The Beaten Path In South Africa’s Overberg

Get Out Your Binoculars: The Best Places To View Wildlife Around Port Elizabeth

This article was originally published on September 11, 2015.