One of the most amazing things about South Africa is that you can live here for years and dedicate every weekend to exploring, yet on any given trip you’ll still find a previously unknown eating experience, a nature reserve you’ve never heard of, or a tiny town harbouring a marvellous guest house or a must-follow art route. The Overberg region is particularly replete with these type of unexpected discoveries.

For example, it took five years of near-constant exploration before I stumbled upon Platbos – and that was only because I spotted a photo of its simply magical accommodation in an Overberg magazine. The small reserve is tucked away among a tangle of dirt roads and if I’d been left to discover it in person, it would probably remain unknown to me forever.

Platbos is a privately owned chunk of indigenous forest close to the Overberg coast, some 160km southeast of Cape Town. Alien plant life is rife in South Africa, so protecting the naturally occurring vegetation is a full-time job for forest owners Melissa and Francois Krige. Although they’ve owned the forest since 2005, it wasn’t until 2011 that they first offered accommodation among the trees. The Forest Camp was the first to open, partly to help fund the ongoing reforestation project and partly to satisfy the constant requests from visiting day-trippers wanting to spend longer among the stinkwood and milkwood trees. The Forest Camp features two tented sleeping units, and there is space to pitch your own tent, but the camp must always be booked in its entirety, lending the forest not so much an air of exclusivity as of privacy and serenity.

There are three further accommodation options, offering varying levels of luxury but all boasting the same up-close with nature experience. You might expect that the cabins and tents would make the forest feel commercialised, but the whole experience has been designed so that you might never know that there’s anyone sharing the trees with you.

The only people we encounter during our all-too-short stay were German hikers – a small group spending a leisurely hour or two walking beneath the branches and probably wishing they’d planned to stay the night. Day-trippers are welcomed and asked to simply leave their hiking fee in the honesty box. 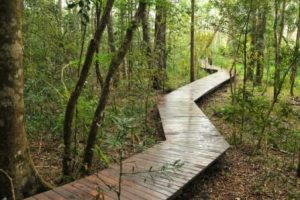 Walking here is sublime and we’re keen to explore. First though, we drop our bags at the Bush Buck Suite, a three-sided log cabin whose fourth wall – made of canvas – rolls up to allow maximum access to the surrounding vegetation. Trees hug the suite on all sides, including from above, where you can see the canopy through a transparent plastic roof.

The serenity envelopes us and suddenly we’re napping, lulled into an impromptu siesta by birdsong and the sound of a gentle breeze rustling through the leaves. Awaking energised, we head along the first of four easy, largely flat routes that wind through trees, some of which date back around 1000 years. It quickly becomes apparent that Platbos is a place for absolute relaxation. Activities here are delightfully low key: meditate in the labyrinth, grab a book and park up on a shady bench, take a picnic to the lookout and eat lunch above the tree canopy, hug a tree, take deep breaths and at the end of the day practice your fire-building skills to cook dinner and to keep the old fashioned boiler going so you can enjoy a warm, al fresco shower the following morning.

A stay at Platbos is an off-the-grid experience – wood is available but you need to bring firelighters, food and in the absence of a fridge, a cooler box and cold pack. There is no electricity, so laptops, tablets and phones can be safely left at home, exchanged for some old-school evening entertainment – stargazing, birdwatching and telling tales around a crackling fire. 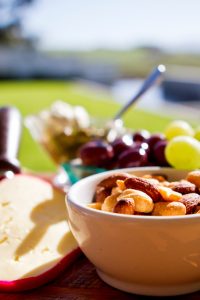 Around 20km east of Platbos sits Elim, where old-school pastimes are de rigeur. Elim is a Moravian mission station, founded in 1824 and in many ways, frozen in time. Taking prime position, of course, is the church – a vast building with a whitewashed exterior and a simple, largely unadorned nave. One of the most notable parts of the church is the clock, the oldest working clock in South Africa.

The attractions in Elim are understated ones, but with a little help from a local, they can be quite fascinating. The best thing you can do here is seek out amiable guide Emile Richter, though truth be told he will probably find you before you see him – Emile has a sixth sense when it comes to visitors arriving in town. Join him on a short walking tour of the adorable thatch-roofed hamlet, stopping off at the monument to emancipated slaves, the 19th-century watermill and the small museum with attached tea room.

Elim is a dry town, but if you’re looking for refreshment of a stronger sort, there are a couple of little-known wineries to drop in at en route to the coast. Stop at Black Oystercatcher for a farm-fresh lunch and a cool glass of sauvignon blanc. If you opt to explore the Overberg coastline, you’ll very likely have an encounter with a real oystercatcher, a seabird that actually lives on a diet of mussels, rather than the oysters its name would suggest.

If you ask anyone to name a coastal Overberg town, chances are high that Hermanus will be the first name off their lips. The “whale capital” is supremely popular and deservedly so, but there are some less visited but equally charming towns to explore further along the coast – plus some delightfully deserted beaches. There is a delicious stretch of coastline between Gansbaai and Die Dam, a region of white sand beaches where seals lollop in the waves; of fynbos-flanked hikes; of lighthouses and shipwrecks and even a sandy ghost town. 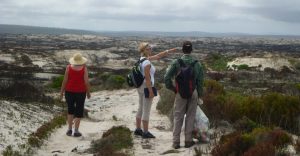 It’s the type of offbeat corner where a little local knowledge goes a very long way, so I join Leon Hugo to tackle the Perlemoen Trail, a multi-day hike along the seashore. Our walk begins at Die Dam and hugs the coast for the three-day adventure. Longer versions are also available, with the fittest and most time-rich joining the walk for a full week. With the Atlantic Ocean pummelling the rocky coast on one side and low-lying shrub-like fynbos vegetation to the other, the trail gradually leads to Quoin Point lighthouse and beyond it a beach that instantly invites all to pull off their hiking boots and enjoy the next stretch of the hike barefoot. It’s a worthy 7km detour to see the “ghost town” – an abandoned resort whose buildings are now filled with sand.

Despite being on an overlooked stretch of coastline, the Perlemoen trail has some fascinating stops. The quaint Strandveld Museum is filled with shipwreck artifacts largely collected by curator and former shipwreck diver, Jan Fourie, while the caves of De Kelders were used by both the indigenous Khoisan people and later, by visiting Victorian socialites looking to bathe in the caves’ pools.

Each day of the trail ends in a local guest house, with seafood dinners taking place in neighbourhood restaurants. The meals might not be fancy, but they’re tasty and served with a welcoming smile – a smile you’ll see again and again throughout the more remote Overberg towns; a smile that makes you grab a map and see what further undiscovered adventures await over the mountain…