In the sixth installment of our monthly flight review series, AFKTravel’s editor flies economy class on Qatar Airways and the Boeing 787 ‘Dreamliner’ for the first time, during the first leg of her recent journey from Johannesburg to Miami. Here she dishes on whether the plane lives up to the hype.

Before I booked my ticket on Qatar Airways from Joburg to Miami (via Doha), I learned that the first leg of the journey would be on the much-vaunted Boeing 787 Dreamliner, the supposedly state-of-the-art plane that was meant to surpass all others in comfort, quality and technology. I was quite excited by the prospect, especially considering that none of my friends had flown this particular plane before and I would therefore have bragging rights.

However, after reading reviews of the plane on SeatGuru.com (where I went to discern the optimal seat selection), I started to panic. The reviews were overwhelmingly negative, with the majority of passengers complaining about uncomfortable seats. Considering that I am almost six feet tall and the flight was eight hours long, this did not bode well. But as the ticket had already been bought, I had no choice but to grin and bear it. 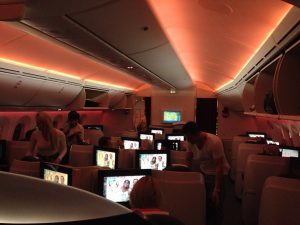 Business class on the Dreamliner (Photo by Karen Elowitt)

Fortunately, my actual experience did not align with those disgruntled reviewers’. The seats were no more or less comfortable than any other economy-class seat I’ve had the misfortune of sitting in (I am only partly joking here), which somewhat surprised me. Apparently each plane costs around US$250 million to build, so you’d think that the seats would be radically redesigned to assure greater passenger comfort, and to complement the plane’s superior fuel efficiency, new composite materials, and bleedless engines (whatever that means). But no, they were rather ordinary, with a standard 31 inch pitch, a snug 17.5 inch width, and a somewhat hard seat bottom that lacked the slight upward angle that I was used to. The narrowness of the seat meant that the large lady next to me kept elbowing me in the ribs, which did not allow for even a short nap. But the biggest design flaw, in my opinion, is the fact that the entertainment system hardware is located in a box under each aisle and window seat, which takes up about 1/4 of the available foot space. For a plane that was designed for long-haul flights, this is just bizarre.

Other features of the plane were somewhat more impressive, but not knock-your-socks-off incredible. The windows, which are 30% larger than a standard jet window, are not opened and closed manually, but dimmed or brightened by pressing a button on the fuselage wall. Groovy colored cabin lighting adjusts depending on the time of day or activity (ie meal service) and provides a calming ambiance in the cabin. This is a big improvement on the standard harsh white fluorescent lighting of most other planes. On take off and landing the engines are noticeably quieter than other jets, and I didn’t need earplugs during my fitful sleep sessions, despite being near an engine. The cabin was also less dry than other jets I’ve been on — I noticed that my skin, nasal passages and lips weren’t constantly parched. Apparently this is due to higher humidity levels in the air. Other perks include a toiletry kit with earplugs, toothbrush/toothpaste and eye mask, and a set of headphones, and a USB port in the seat-back entertainment console.

The lavatories have “touchless” taps – which germophobes will love — but I felt that this was somewhat wasteful. The water runs for a set amount of time once activated, which turned out to be much longer than I needed. And the toilet flusher button is not touchless, which germophobes will not love. Otherwise the lav was fairly standard, save for the nifty fold-down baby-changing table. 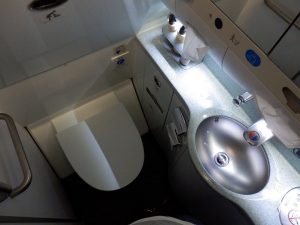 I was slightly disappointed in the in-flight entertainment options — the selection of TV shows and movies was uninspired, in my opinion, and didn’t offer nearly enough recent films or shows, compared to “classics.” Luckily I was able to find several episodes of “Downton Abbey” to binge-watch, which made time pass quickly. Food was also quite ordinary — we had a choice of chicken, fish or vegetarian entree for dinner, but the chicken and fish quickly ran out and many diners were forced to eat the somewhat less-substantial veggie plate. Luckily the fresh rolls, side salad and opera cake dessert fleshed out the meal. And shortly before arrival we were served some sort of “chicken salad”-type sandwich which I would have avoided were I not so hungry.

Service during the flight was satisfactory, but not particularly notable. I find that most Middle Eastern and Asian airlines have better service than American or European carriers, and Qatar was no exception. Aside from the beverage cart running over my foot several times and a drink being spilled on my leg, flight staff were polite, well-trained and well-groomed. Boarding went very smoothly, mainly because the airline seems to have figured out an optimal system for getting everyone on board in an orderly, relaxed fashion: each of the four “boarding groups” is assigned a separate seating area in the boarding lounge, and passengers actually stayed seated until their group was called. There was minimal delay once I entered the jetway and queued to enter the plane, probably due to the fact that the overhead luggage bins are larger on this plane than others, which means passengers spent less time trying to wrestle their carry-ons into tight spaces.

Overall this was a pleasant but not remarkable flight experience, made better by the fact that the price was extremely low — Qatar Airways has some great deals on offer, if you carefully dig through their website (or a meta-search site like Skyscanner.net) and are flexible in your departure and return dates. My flight from Johannesburg to Miami via Doha (with the first leg on the Dreamliner) cost just US$850 round-trip. You literally cannot beat that.