If you love wildlife and want to help conservation efforts in South Africa, choosing to volunteer with animals is an incredibly rewarding experience – and a lot of fun.

There are countless places to volunteer with animals in South Africa, but be careful where you choose to go – many sanctuaries and private reserves have dubious track records when it comes to animal ethics (such as the breeding of captive animals just to make money off volunteers coming to feed them) and the exploitation of volunteers. Do your research thoroughly before committing your time and money to volunteer somewhere.

Here’s our pick of places to volunteer that come with a stamp of ethical approval. 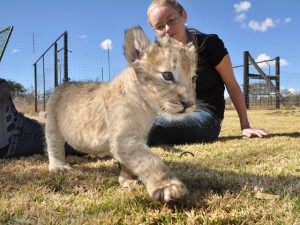 Volunteers are taken behind the scenes to see how the conservation management of Shamwari Game Reserve, a malaria-free Big Five game reserve in the Eastern Cape. You’ll get hands-on involvement in the environmental and sustainability projects the reserve is running, such as monitoring projects, and you may also get a chance to help at the Born Free Foundation and the Shamwari Animal Rehabilitation Centre where big cats and other animals are rehabilitated before being released back into the wild.

Minimum stays are two weeks – though longer stays are recommended (many volunteers stay up to 12 weeks).

This newly-opened sanctuary in the small town of Stanford in the Western Cape aims to house captive-born lions, tigers, jackals, leopards and caracals safely and ethically – with no allowances for petting, breeding or trading that some of the other big cat sanctuaries engage in. The owners of the sanctuary also want to raise awareness of the terrible conditions captive cats live in, by doing guided educational tours with visitors. Tasks you’d be involved in as a volunteer include preparing food and feeding the big cats, cleaning and maintaining enclosures, farm work, educating visitors, Volunteers become part of the family, staying in the owners’ home which comes with a swimming pool and an outdoor barbecue area. 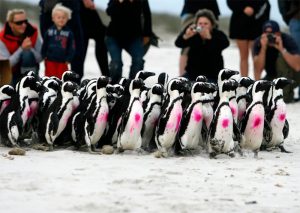 One of the world’s leading seabird rehabilitation centres, Cape Town-based non-profit SANCCOB (Southern African Foundation for the Conservation of Coastal Birds) treats injured, oiled, ill and abandoned African penguins and other threatened seabirds, rehabilitating them and then releasing them back into the wild. Volunteer for a minimum of six weeks and get hands-on involvement in preparing fish for the birds to eat, feeding and handling the birds, cleaning their pens and helping with penguin releases. If you live in Cape Town you can also volunteer whenever you have free time for half day or full day shifts.

Volunteers on this Big Five game reserve on the Garden Route in the Eastern Cape are seen as “Assistant Conservation Managers,” as all the work you do has a real impact on the conservation of wildlife and ecosystems on the reserve. You’ll get the chance to be involved with a holistic array of aspects related to the park, including research (such as data collection for monitoring animals), conservation management (for example, game counts, alien vegetation control, road maintenance, capturing of wild animals, game introduction) and community development (teaching at a local under-funded farm school one day a week). Some of the projects that volunteers will be included in include elephant impact monitoring, population status of leopards, lion prey selection monitoring, rhino monitoring, and bird monitoring. Volunteers will also be taken on bush walks, game drives, night drives and camp outs in the bush during their stay, when they’ll get to learn more about the diverse plant and animal life on the reserve. To get involved in all these activities you need to stay for a minimum of four weeks, while the maximum stay is 12 weeks.

Volunteer at Jane Goodall’s chimpanzee sanctuary in Nelspruit, Mpumalanga, and spend your time observing the chimps and working on behavioural data sheets, helping with maintenance tasks, preparing the animals’ food and helping out with behavioural enrichment activities for the chimps. There’s a minimum of only three nights to volunteer here, but you can stay for weeks if you have the time. On your time off there’s a lot to explore in the area – close by are Kruger National Park, the scenic Panorama Route and elephant sanctuaries to visit.

The South African Animal Sanctuary Alliance is made up of three animals sanctuaries in Plettenberg Bay: Monkeyland Primate Sanctuary (with primates from around the world), Birds of Eden (where there are 220 species of exotic and African birds, most of which had been mistreated in zoos or as pets) and the Jukani Wildlife Sanctuary (home to big cats such as lions, cheetahs, tigers, leopard, jaguar, puma and caracal as well as other wildlife species including zebra, springbok, honey badgers and raccoons). The three sanctuaries provide volunteer placements where you’ll be expected to assist when visitors come to the sanctuaries as well as helping to care for the wildlife and birds. There are also opportunities to work as a volunteer in one of the specific roles the sanctuaries need filled, such as multilingual guide, grant proposal writer, student photographer, journalist and veterinarian.