The bleating of cattle stirred me from my sleep and, with the first soft, tinged rays of dawn light, hushed voices could be heard whispering nearby. Squeaking open the door of the mud and wattle hut in which I had been sleeping, I stepped outside to see that despite the early hour, the Maasai manyatta (farmstead/village) was awake. Women, crouched beside brown cows with big eyes, were easing milk from bursting udders into cheap plastic cups. Half-dressed children skipped through the dirt, while the men, in royal reds and purples, sat on a rickety, wooden bench and drank morning tea that tasted of wood smoke. Morning greetings over, I took my place on the bench next to the men and we sat in silence watching life in the manyatta unfold. Beyond, just a few hundred metres away, the daily stream of tourist safari jeeps kicked up the dust on the dirt road leading to Kenya’s nearby Masai Mara National Reserve. Warmed by the tea and the rising sun, conversation started to flow. 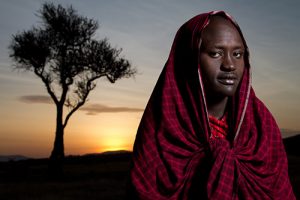 James Ole Lesaloi, a stocky Maasai man burning with energy, drained the last of his tea and, pointing at a group of beige minibuses filled with camera-toting tourists, turned and said “We’re just five minutes’ drive from the main entrance to the Masai Mara. Those tourists are all going to a safari lodge with showers and clean running water. Before, for all these manyattas around here, and for the village of Sekenani, there was no clean, running water. There still isn’t in Sekenani. People still have to get water from the river or walk twenty minutes to the stand pipe we’ve built.”

The other men nodded their heads in agreement before James continued. “It was seeing these jeeps full of money go past that made me start Semadep. I wanted to know what I could do to help the community in terms of education, health and basic needs.” He explained how this had given him the idea of building a standpipe, but that it had been a struggle to raise the capital to see the project through.

“But didn’t the tourist lodges and camps help?” I queried.

“No. None of them helped.”he said. “Now though one has joined us, but they are the only one out of around 150 camps and lodges.”

I put it to him that almost all the lodges inside the reserve claim to help the local community, and without hesitation he replied “They don’t.”

“So, where does the money given by tourists for these projects go?” I asked.

“Into their [the lodge owners’] pockets,” he replied with a wry smile.

I shouldn’t have been surprised by this. I’d already visited a clinic (also partially funded by Semadep) no more than 100 metres from Sekenani gate, where the nurses had told me that not a single lodge in or around the reserve donated money to the clinic, despite the claims of most to help with local health and education projects. “It’s just a marketing strategy [by the lodges].” I asked the clinic technician if the local community benefited much from the presence of the Masai Mara. “I think if we were benefiting, we would have a very nice school,” came the sarcastic reply.

When James started Semadep, a Maasai community development project, at the bright and breezy age of twenty-nine, his goal was to change the lives of the people in his local community. Most people would say that with the construction of a standpipe, school, clinic, community information and computer training centre, and a project to help local orphaned children, he has achieved his goals many times over, but he feels he still has a long way to go. He now wants to ensure his community gains what he considers a fair share of the wealth generated by tourism on ‘their land’ and to give foreign tourists the opportunity to learn all about Maasai culture. To do this, James and his team have established a tourist homestay programme in a working Maasai manyatta. 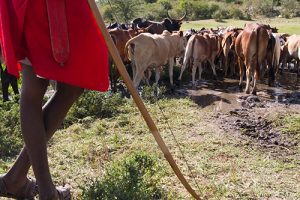 As I found out, a stay here wasn’t so much about dawn and dusk wildlife safaris inside the reserve (although these are possible), but more about sleeping in a mud and wattle hut (albeit one equipped with a bed and solar lighting) and getting involved in day-to-day manyatta life: cows need milking, meals need preparing, and hours are dedicated to walking with the Maasai and their grazing cattle on the edge of the reserve.

And yes, while not everyone would regard going days without a proper shower and sleeping in a mud hut as the stuff of holiday bliss, the glimpse I was afforded into rural Maasai life was a privilege and an honour that no amount of safari pampering could possibly have replaced. It would also have been fair to say that though I didn’t see quite as many wildebeest and giraffes as the average safari-going tourist, I came out of the village homestay with a much deeper appreciation of the problems facing conservationists, local communities and tourism industry bosses based around the Mara. And to me, that was probably worth much more than two weeks staring at lions.

This realisation meant that when I did finally leave the manyatta and went off to see the animals, that I wanted to do it in a place and manner where the local people really gained from my presence. The next stage of my Masai Mara journey was to take me from village hut to a spiritually protected forest via one of the conservancies fringing the Masai Mara Reserve that are doing so much to reshape East African conservation.

Read the second part of Stuart’s series here: Waking Up In The Maasai Mara, Part 2: Self-Sufficiency And Sustainability At Olarro Conservancy