Casablanca, or “Casa” as it is known locally, is Morocco’s largest city, and the economic powerhouse that employs 48% of Moroccans. A hub for business travel, it’s often ignored by leisure tourists why bypass its traffic and urban sprawl and head to more exotic and traditional cities such as Marrakech and Fez. Casablanca can be a hard city to love, but should not be dismissed outright; if you take the time to seek out the chic shopping quarters, historical monuments, bustling medina and Art Deco architecture you may just be surprised how the city grows on you.

Casablanca was built in the 1920’s (using aerial photographs) by the French, who considered it the pride of French North Africa. Due to the decade in which it was born, the city is replete with Art Deco buildings like the Hotel Translantique and the Rialto cinema, which have both been restored, though others are in need of renovation. These antique treasures sit cheek-by-jowl with modern high rises and non-descript industrial districts. 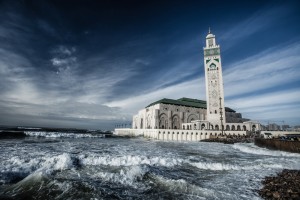 The gigantic Hassan II Mosque, the 7th largest in the world and the mosque with the tallest minaret, remains Casablanca’s main attraction. This solitary and magnificent monument, which was completed in 1993, towers over both the city and the sea. Take a guided tour and look through a glass floor and see the sea below. Wonder at the glory of Moroccan craftsmanship, evident in the vaulting arches, marble floors, carved white stucco, colorful zellij tiles, immense carved wooden ceilings, huge lanterns and chandeliers. It is one of only two mosques open to non believers in Morocco.

The imposing Mauresque grandeur of the Wali’s Palace and the Palais de Justice on the Place Mohamed V and the ornate post office were built by French architects in the 1920’s. The Arab League Park and the towering white Sacre Coeur cathedral, now an exhibition center, are nearby. The Slaoui Foundation Museum at 12 Rue du Parc houses a collection of vintage posters, paintings by Jacques Majorelle, and displays of jewelry, glasswork and objets d’Art in a 1940’s Art deco building.

The Corniche has been greatly expanded in recent years. There are a number of seaside swimming pool clubs with luxurious restaurants such as Tahiti Beach Club (25 Boulevard de la Corniche), where you can swim and dine while enjoying the view of the Atlantic. Day memberships are available for visitors. If you’d rather not pay, just head to nearby Ain Diab beach, one of the city’s best urban beaches, and take a dip side by side with Casa locals.

Casablanca’s medina, spotted by its looming clock tower, has all manner of bargains including copperware, lanterns, carpets and woodwork (such as chess sets and ornate boxes). The Skala bastion with its brass cannon faces out to sea. For a more modern souk experience, head to the area called Habous, where you’ll find metal work, jewelry, rugs, bakeries, and cafes in the “Nouvelle Medina.”

The Twin Towers complex (Tours Jumelles) dominates the skyline in the fashionable modern Maarif district, and offers five levels of shopping plus the Kenzi Tower hotel and numerous spas, bars and restaurants.

The new-ish Morocco Mall, in the Ain Diab district on the waterfront, is the largest in Africa with 200,000 square meters of retail, restaurants, cinemas, and an aquarium. 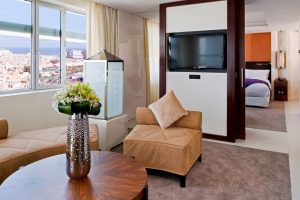 The city has a great selection of business-oriented luxury hotels which accept most international credit cards. One of our favorites is the Sofitel Tour Blanche, a five-star hotel that boasts every amenity you’d ever expect — from a thoughtful concierge with encyclopedic knowledge of the city, to elegant touches in the guestrooms, to butler service and extensive business services. And don’t forget the swimming pool, exercise facility, two-story spa, and elegant contemporary French cuisine at L’Arabesque restaurant.

Other top choices include the Hyatt Regency, in the center of the Place Nations Unis, which offers fine restaurants and a substantial bar. The Sheraton, at 100 Avenue des F.A.R., is also a favored hotel for business travelers, as is the Royal Mansour, but it is closing its doors for a two-year renovation.

If you want to stay close to the airport try the four-star Atlas Sky Hotel or the Relax Airport Hotel next door, which offers shuttle buses to the airport every 30 minutes.

There are a number of budget and boutique hotels as well. For a complete list of hotels in the city, visit our Casablanca hotels page.

Casablanca has many fine gourmet restaurants that will empty your wallet and put a smile on your face. The city’s top eateries include A Ma Bretagne, on Boulevard de l’Ocean Atlantique, which is famous for its seafood, and Le Rouget de l’Isle, located in a restored Art Deco building. You can eat in the garden or the Art Deco dining rooms. La Bavaroise, near the central market on rue Allal Ben Abdellah, is a brasserie renowned for its steaks, filet de boeuf, and convivial atmosphere. An excellent choice for lunch or dinner.

One place which will not dent your wallet is Le Petit Poucet. This historical gem is almost exactly as it was in the 1920’s when it welcomed luminaries such as Edith Piaf, aviator and writer Antoine de Saint-Exupéry, and Albert Camus. A framed letter with doodles penned by Saint-Euxprey hangs on the wall. The ceiling has exuberant design with flowing colored ribbons, and the food is served from a silver trolley.

Rick’s Café was modeled after the cafe in the classic film Casablanca. Here you’ll find Art Deco design, a piano playing 1940’s hits, waiters in fez and tails, and a bar framed with bronze palm trees. This is a not-to-be-missed atmospheric fine dining experience. (Note that a business dress code is strictly enforced here.)

For late-night cocktails and lively music visit the swish Brooklyn Bar on the Corniche. For a great panoramic nighttime view of Casablanca’s city sprawl, head to Sky 28, a bar at the top of the Twin Towers in Maarif.

Most travelers arrive by Mohammed V Airport (CMN), the main air hub for Morocco. This is the usual port of entry for those coming from overseas, who can then connect with domestic flights to Marrakech, Ouarzazate, Essaouira, Fes, Rabat, and Tangier. The airport is served by Air France, Alitalia, Emirates, EgyptAir, Lufthansa, Qatar Airways, Royal Air Maroc, Turkish Airlines, and many others. 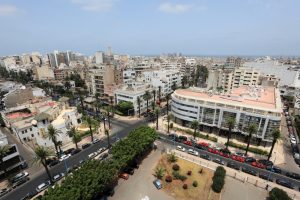 Aerial view of the city (Shutterstock)

Casablanca is 30 km (19 miles) north of the airport. The best way to get to the city center is by train. Jump on at the ground floor of Terminal 1, and hop off at Casa Voyageur station. The journey time 45 minutes and it runs from 3:55 am to 11:45 pm.

The other alternative is to get a grand taxi outside the terminal. Negotiate and agree the fare beforehand. You can also hire a car at the airport, but note that driving conditions  in the city are very challenging.

To get around Casablanca most visitors take taxis but traffic can be chaotic in this city of five million people and almost as many cars. This can be avoided if you take the brand new tram system, which provides a more comfortable and quick ride through the city.

Money and banking: Money change desks and ATM’s are available in the airport at terminals 1 and 2 and at hundreds of locations around the city. The currency in Morocco is the dirham, which is abbreviated MAD or Dhs. You must change your dirhams back to your home currency before you leave the country, as you cannot do it abroad. Most hotels take Visa and Mastercard; few take American Express. 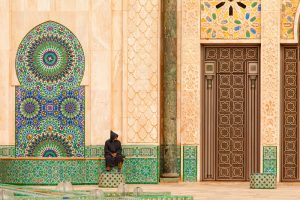 Languages: Arabic and French are the main languages in Casablanca. English is widely spoken in touristed areas, but having some knowledge of French or Arabic definitely helps in less touristed areas.

Safety: When going out at night, travel by taxi or tram, don’t walk. The city center including Anfa, Maarif and Gautier is safe to walk in during the day.