We get it. You came to Madagascar to explore its spectacular national parks and unique wildlife. Which is why you’re in a 4×4, headed south on the main national highway towards Ranomafana, Isalo, Tulear, Morondava, or the Avenue of Baobabs. Most likely, your driver has a lunch stop planned for you in the quaint highland city of Antsirabe, just when you were wondering how you’d be able to stick out another eight hours of winding roads.

But wait — Before you hop back in the car, why not stick around a while? After all, Antsirabe has much more to offer than just lunch. We know that if you just give it a chance, you’ll soon be charmed by the city’s laid-back vibe, Norwegian-influenced architecture, and wide, pleasant avenues. Stay. Spend a day. Get to know the people of Madagascar. 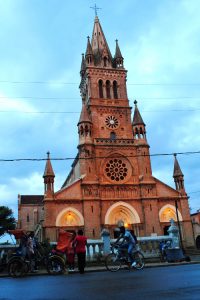 Although Antsirabe is the country’s third largest city, a good part of it’s industry still revolves around agriculture and factory production, most ubiquitously, the beloved national beer THB. The result of which is a comparatively clean, well maintained city, and a reputation amongst Malagasy for having some of the freshest produce in the country.

So, for a taste of local life, be sure to stop by Antsena-kely (the little market) for fresh produce and woven baskets. If you think you can handle something a bit more chaotic, the large and sprawling Tsena Sabotsy (Saturday market) can be visited any day of the week. As the name would suggest, it’s in full swing on Saturdays, when shoppers from the surrounding countryside bus in to the city to hunt down a good deal on food. Be extra careful of pickpockets here on Saturdays.

Once you’re done, join the rest of the city for a stroll down Avenue de l’Indépendance. Pass by the Hôtel des Thermes, the old train station, and the Antsirabe cathedral — all of which were built in the early 20th century — for a glimpse of the Antsirabe’s oldest and most impressive architecture.

Or, if you’ve still got some energy in you, bike or drive out Lac Tritriva. The sparkling blue green waters of this lake came into existence when a crater filled with water and is where, according to local legend, two young lovers drowned after their parents forbade their union.

After roaming around Antsirabe’s main attractions, we’re sure you’ll have worked up an appetite. Fortunately, the city’s famous reputation for great food doesn’t stop in the markets. It’s also home to some of Madagascar’s better restaurants, but without the pretentiousness of Antananarivo’s dining scene. So, where to go? 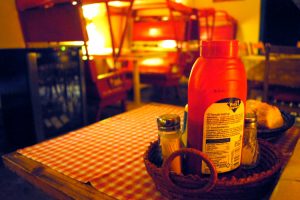 For a cozy, intimate vibe, French-owned L’Insolite is an ideal dinner spot. L’Insolite is slightly off tourist circuit, but a well loved hang out spot for foreign expatriates living in Antsirabe. And it’s easy to see why. This rustic-looking restaurant has the charm of an old swiss lodge and hearty French fare — ahem, raclette, anyone? — to match.

Alternatively, Pousse-Pousse Snack Bar has long been a traveler favorite, serving up a combination of standard international fare and Malagasy dishes, while diners sit in booths repurposed from old pousse-pousses (rickshaws). We recommend going for the locally sourced zebu burgers or whatever the “special du jour” happens to be. If it’s a Friday or Saturday, make a reservation. Pousse-Pousse often hosts live bands and it can fill up quickly when they do!

Although both of these restaurants will run about $7 – 10 for a meal, serious budget travelers will appreciate, Au Bon Coin (across from the Antsirabe cathedral, near Carambole); a local Malagasy favorite specializing in traditional vary sy loaka (rice and side dish) Malagasy food. 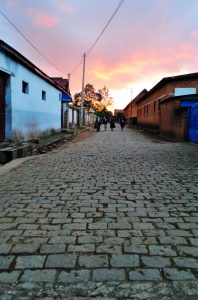 If you haven’t gotten sucked into a concert at Pousse-Pousse or lively conversation with the other diners at L’Insolite or Au Bon Coin, don’t end your night there. Although Antsirabe quiets down after dark, it still has a good amount of options for a night out.

On chillier nights, — and trust us, it gets downright chilly at night in Madagascar’s highlands — cozy up for a nightcap by the fire at Chez Dom. Located in a large, Norwegian style house, Chez Dom has a quiet bar on the first floor where owner and bartender, Dom, serves up a mean cocktail and even better conversation.

For a totally local, though somewhat rowdy, experience, La Cabane (1 block behind the Jumbo Score Supermarket) serves up cheap beer and skewers of freshly grilled chicken to regulars and visitors alike. Its sidewalk seating also offers a chance to do some top notch people watching, although, what’s going on inside the bar may be entertainment enough.

Just down the street, the local Alliance Francaise hosts events and concerts by local bands regularly (always announced on their Facebook page). If you’re lucky enough be in town for one, it’s worth the 5,000 Ariary ($2.50) entry fee to mingle with the local Antsirabe hipsters and “rastas” and catch a glimpse of the creative youth culture that’s so rare in other parts of Madagascar.

For dancing, Antsirabe does have two legitimate nightclubs, but they lean a bit on the sleazy side. Stick to Alliance if you can.

Often described as a smaller, cleaner version of Antananarivo (Tana), Antsirabe gives visitors a taste of urban life in Madagascar in a much more compact and easy to navigate space. Downtown Antsirabe is easily navigable on foot, and there’s never a shortage of willing pousse-pousse (rickshaw) drivers ready to whisk you away to your next destination.

For bike rentals, budget traveler hot spot, Chez Billy (Rue Daniel Rakondrainibe) rents them out for about 20,000 Ariary (10 USD) per day. But like everything in Madagascar, feel free to bargain them down if you’ll only be gone for a few hours.

Chez Billy: A clean, centrally located hotel across the street from Antsena-kely. It’s the best budget option in town and books up in peak seasons.

With a day in Antsirabe under your belt, go, head out into the countryside. Because even if Antsirabe is often overlooked by most travelers, you know the truth. It truly is Madagascar’s little urban gem.