On the southern edge of Antananarivo (Tana) the country’s one main highway begins its journey south. This highway, known as the RN7, exits the city and winds through rice-terraced hills. Children play meters away from its edge. Women sit next to blankets piled with fresh carrots for travelers to buy as “voandalana” — literally “gifts of the road” — and bring home to their families. The further south it goes, the drier the landscape becomes, until finally it takes a westward turn towards the sea, and mountainous horizons give way to flat, desert expanses with Baobabs jutting up into the sky like a tree turned upside down.

Although the southward-bound RN7 brings travelers to a number of popular destinations — Morondava, Ranomafana, Andringitra, Isalo, Tulear, Antsirabe — foreign travelers rarely use it as a way to get to the southernmost coastal city of Fort Dauphin. However, one summer while I was living in Madagascar, a friend and I decided to attempt the 48-hour overland trip. After all, we were on a budget, baby, so we were going to ride that road like the locals do: by bush taxi (taxi-brousse). 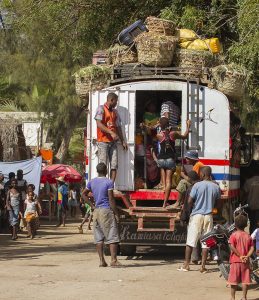 We knew we weren’t in for a typical taxi-brousse journey from the moment we arrived at fasankarana, a crowded, muddy, unpaved lot in Tana that served as a bus terminal for all southern-bound busses. To start, we wouldn’t be piling in to one of the standard van-sized taxi-brousses, but a monstrous vehicle resembling something like a school bus on steroids — a physical testament to the rough ride ahead.

“After Ihosy, the paved road ends,” our to-be driver explained, “so we need a bigger bus.”

“Ihosy?” I said, “that’s only halfway between Antananarivo and Fort Dauphin!”

He shrugged in response as if to say “it is what it is” and went back to loading luggage on top of the bus — large sacks full of rice, baskets of chickens, crates of Coke, suitcases, and even a motorcycle.

Inside the bus, other passengers began to settle in and claim their spaces. They brought cheap pillows and blankets to keep warm once the sun went down, baskets full of snacks and voandalana for their families. Listening to them chat we learned that in the last row, a husband and his sick wife were returning from an unsuccessful trip to a doctor in Tana. To our right, a university student was making her way back home for the summer, while in front of us a friendly middle-aged woman said she was visiting family.

At dusk, we left, arriving in Ihosy after a full night of driving. As promised, the pavement soon gave way to a rocky, dusty road that would carry us across a full 500 kilometers (about 1/4th the length of the entire island) to our destination. Not only that, but the presence of humans and houses began to taper off as we bounced our way through a vast and empty grassland. 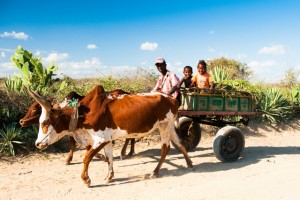 As if to add a western cowboys-and-Indians feel to the scene, our seat neighbor began to tell us about the cow bandits (dahalo) who had been causing trouble lately in these parts. “We just have to make sure the bus goes through the dangerous places in the day. Then we’ll be safe,” he said. I just shook my head and thought “no turning back now, right?” and returned to staring out the window.

Every once in awhile we’d come across a small cluster of huts and, with little else to do, I began taking note of the changes in people and lifestyle. Brick houses became thatched huts. Tables full of beautiful vegetables became woven mats with nothing more than a few piles of onions and tomatoes. The clothes became more traditional. The conversations louder and more boisterous. People seemed happy, but nonetheless, it was apparent that this region lived off far less than the relatively wealthier highlands.

Inside the bus as well, conditions were a far cry from luxury. But here, I wasn’t a passive onlooker, I was dusty and groggy like everyone else.

On our second day, as we stopped for a lunch of rice and beans in a small village, the university student commented on how unusual it was for us to take the bus. As we swatted flies from our plates, he told me, “Most vahaza (foreigners) don’t make this trip. But you, you’re Malagasy. You ride the bus with us.”

Given that it’s a long, slow trip from Tana, it’s no surprise most tourists opt for the two-hour flight instead. But by taking the bus, I was inadvertently claiming solidarity in the hardships and challenges the Malagasy face on a daily basis. My friend and I never intended this to be more than a thrifty move, but for our fellow passengers, it showed respect and interest in their way of life. It closed the gap between vahaza and Malagasy. 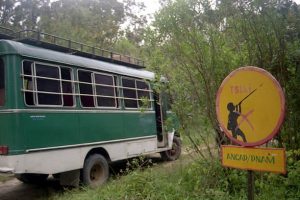 I realized then that the biggest ways we can show others we’re interested in their culture is not necessarily to watch a dance performance, go on a tour of local slums, visit ethnic villages — or any other act that falls under “cultural tourism” — but to participate in the mundane. It was more meaningful when Malagasy saw us doing laundry in the river, eating rice at a roadside stand, or, in this case, enduring a long and dusty bus ride together with locals. Not only does this give us a more informed impression of daily life, but makes us, as foreigners, a little less foreign in the eyes of locals.

Although these acts vary from country to country, any traveler independent, adventurous, or just plain budget-conscious enough to forgo a private 4×4 and driver to travel in Madagascar by bus will quickly learn the journey to their next destination isn’t just a part of the adventure. It’s an act of cultural immersion. After all, what better way to immerse yourself and make a friend or two than to endure an eight hour ride in the automotive equivalent of a tin can while cozied up to a family of four and their chickens?