Africa is home to thousands of different ethnic groups, each one having its own unique language, customs, and religious practices. Traditional African artifacts and in particular, masks, are some of the most sought after in the world by collectors and anthropologists. Each mask tells a different story and has its own history, and meaning. The materials a mask is carved from are as important as the expression it wears or the purpose it is used for. Few are decorative; most are used for specific purposes such as initiations, religious, or ceremonial purposes. Whatever the case, we find African masks utterly fascinating and have collected a gallery of 15 of the more impressive ones we’ve ever seen. 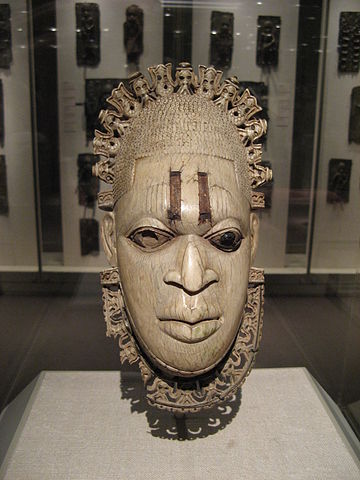 Possibly the most famous or easily recognizable African mask in the world, this unbelievably preserved specimen is from the Edo people and made of pure Ivory. 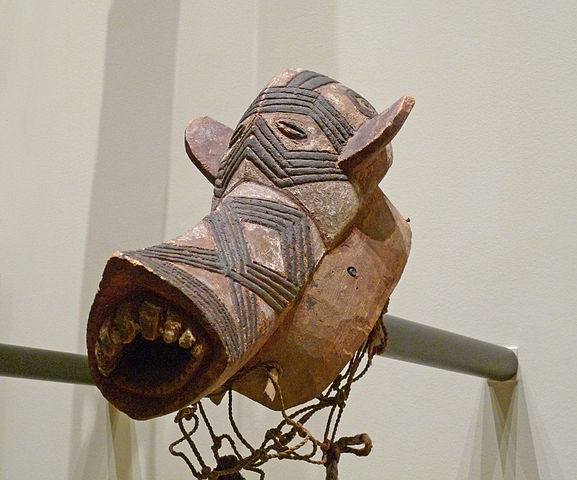 African masks come in a variety of shapes, sizes, colors, and materials. While many seem artistic, many aspects of the mask usually represent something. Everything is done on purpose. 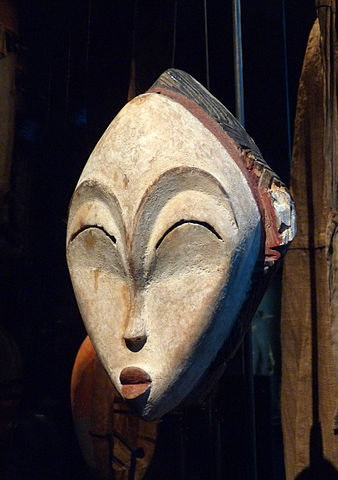 Despite its small size and stature in Africa, Gabon is host to oil wealth and many interesting people, like the Punu, a Bantu people known for their palm fiber cloth and iron weaponry. This mask is an excellent example of their artistry. 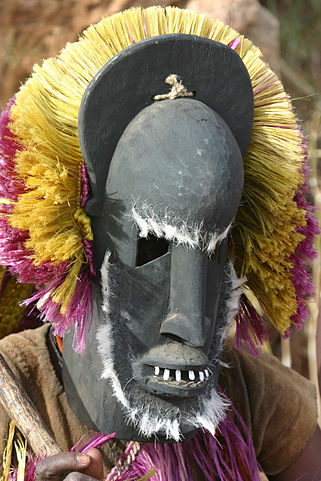 The Dogon People in eastern Mali are renowned for their masks and the culture associated with them. Villages have mask ceremonies and dances every few years and a grand mask ceremony once every 60 years, truly a sight to behold.

This photo from decades ago shows two Nigerians using masks in a traditional ceremony. Masks still hold significant religious and cultural values in many parts of Africa and there are strict guidelines on who can or cannot touch a mask. 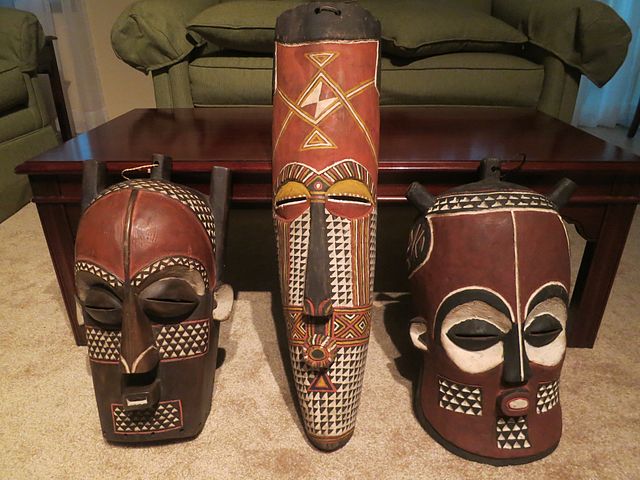 The BaKongo inhabit the western coast of Africa from the Republic of Congo, through DRC and into northern Angola. With an extremely complex and flexible religious system (allowing for Christianity to be combined with traditional practices), the BaKongo are the largest ethnic group in the region and also where the R.o.C. and D.R.C. get their namesakes. 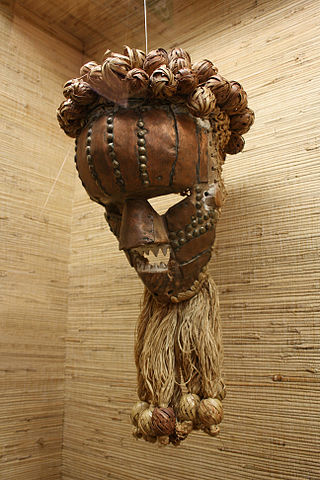 Creating masks is a tradition handed down through generations of family members. Mask makers use what materials are readily available to them. Different regions have access to different materials. This one has copper plating, meaning that there is some type of copper mining in the area it was created, which is likely northern D.R.C. or Central African Republic based on the style.

This Ife mask from the Yoruba people of western Nigeria is an excellent example of their handiwork. The Yoruba reached their artistic pinnacle between 1100 – 13oo AD. This bronze cast represents Odududwa, who is said to be the progenitor of the Yoruba people. 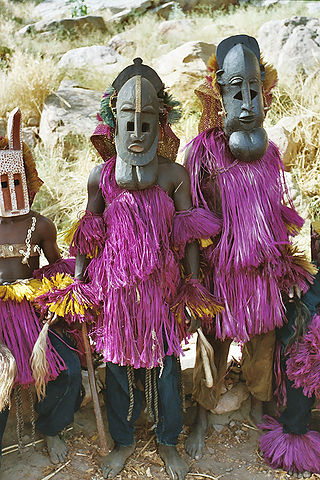 Here is an excellent example of some dancers during a traditional ceremony in a village in Mali’s Dogon Country. Many travelers plan their trips to coincide with mask festivals as they are done for ceremonial purposes and not for tourists’ entertainment. 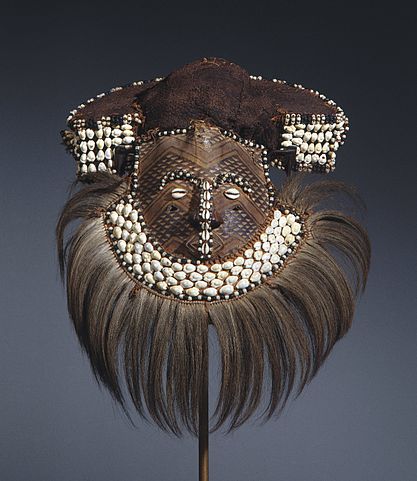 Royal Kuba masquerades in Angola and D.R.C. ended in the late 1800s, however, the practice of creating masks for initiating young boys into manhood still exists. This Mwaash aMbooy mask was supposed to represent the king or chief.

Animals are an integral part of many societies and as such, are often incorporated into masks or art. Here, an antelope is integrated into this Bamabara mask from Dogon Country in Mali. 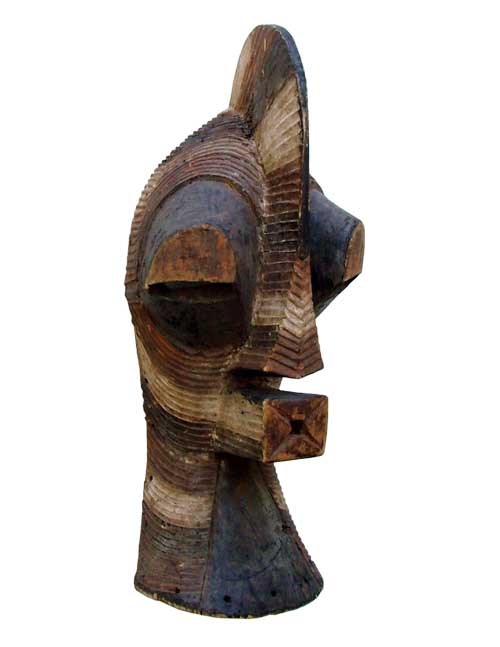 The eye slits and pinched mouth are indicative of masks from the Songye people, deep in the heart of the Congo. Being the largest and one of the most underdeveloped regions of Africa, there are still many peoples in the D.R.C. that still practice traditional beliefs. 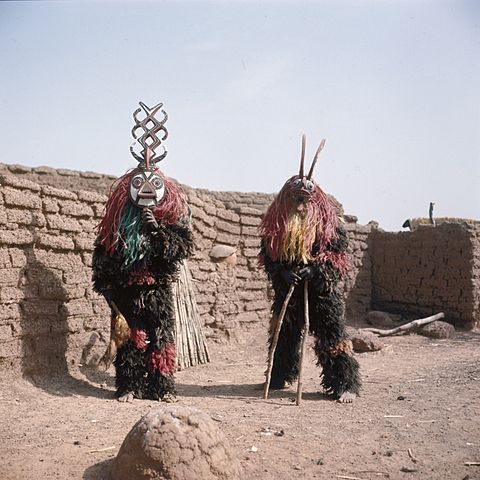 Winiama refers to several different ethnic groups in Burkina Faso renowned for their rich culture and traditional practices. Most of their masks which are very intricate are used in dance and ceremonial performances. 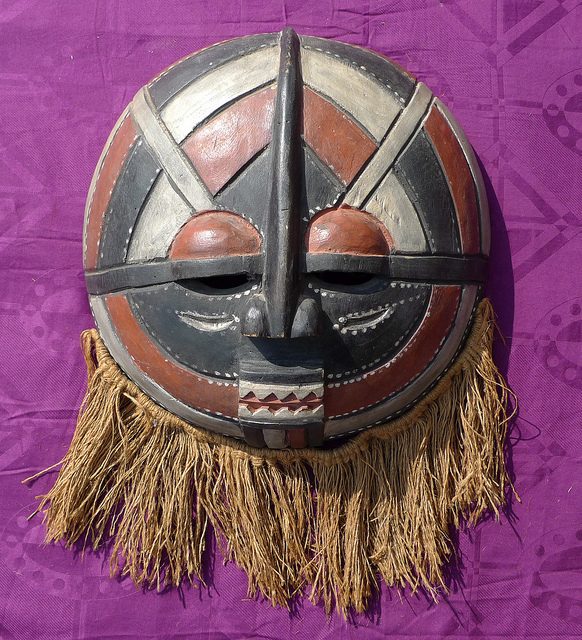 Here is another prime example of a mask from Central Africa, one of the least westernized regions some would argue, which explains the adherence to traditional practices. 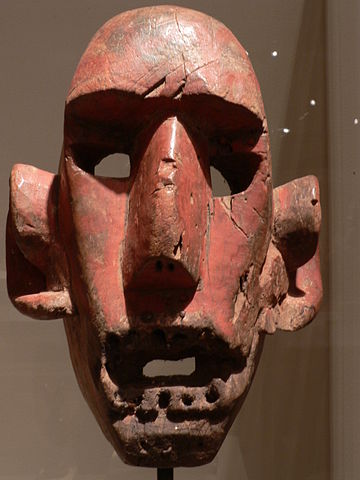 Honoring or venerating the dead is an integral part of many African cultures. This Kwere mask from Tanzania is a female ancestor mask.

15 Souvenirs To Grab On Your Way Out Of Kenya

African Folklore: 12 Mysterious Stories That Will Leave You In Awe