Addis Ababa — or just Addis to locals — is the capital of a country with a history that reads like a fairy tale filled with saints and sinners, Emperors and phantoms, treasures and calamities. It is one of the most interesting cities in Africa. Its streets are home to some of the best museums, galleries and cultural and historical sites of any African city, but partnering up with this history is a happening nightlife and restaurant scene, a booming economy and a pleasant, perpetually spring-like climate. All up, the Ethiopian capital is a fast rising, enjoyable city with a buzz of optimism for tomorrow. 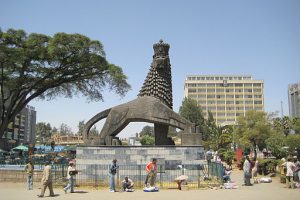 Like many sub-Saharan African capitals, Addis, which was founded in 1886, is a young city, but it’s grown up fast and it’s now a huge and sprawling city of well over 3 million people. The heart of the city is the old Piazza area, which is today full of budget accommodation and numerous cafes and bars, and the city centre proper which centres on Churchill Avenue and Gambia Street. This is where the train station can be found and most government buildings. To the southeast is the Bole Road area (which leads to the airport). This is increasingly the new centre for middle class Addis, and is where most of the best restaurants, bars and hotels are located as well as flash shopping malls. The university and Menelik II Avenue, which is the area where many of the museums can be found, is to the north and east of the Piazza. To the west is the Merkato district, home to what some call the biggest market district in Africa, though others just call it a slum.

Addis is currently undergoing a major regeneration project with new roads being laid and a light railway being built, as well as numerous new shopping centres, business districts and hotels. Although this sounds great (and probably will be), what it actually amounts to at present is that large parts of the city look like a construction site, and the many closed roads are leading to severe traffic congestion.

It was only about 20 years ago when, with a few exceptions, most hotels in Addis were roach-infested rooms at the back of a bar that doubled as a brothel. The intervening years have seen things change – a lot (though if you get off on roach infested brothels, there’s still a few of those out there as well!). The influx over the past couple of decades of foreign businesses, development organisations, and the UN Economic Commission for Africa and African Union calling the city home, means Addis now has a wide array of accommodation in all price ranges.

Whilst roach populations have decreased and hotel numbers increased, it would still be fair to say that most hotels in Addis Ababa are rather overpriced considering the general quality. Interesting boutique hotels are virtually non-existent, and rooms in even the top business hotels tend to be dull and functional. There is a growing number of small family-run B&B’s and guesthouses though, which seem to be improving with each new opening.

The majority of mid and top-end hotels in Addis quote rates in US dollars and, if paying by credit card (only possible in better hotels), will charge your card likewise. Otherwise all will accept Ethiopian Birr payable at that days exchange rate. Cheap hotels stick to Birr.

Compared to many neighbouring capitals, Addis has a great dining scene. Restaurants here tend to fall into one of three groups. The first — and growing in popularity across urban East Africa at an alarming rate — are the cheap junk food places serving burgers and such like, and the ‘Western’ style coffee shop chains. Then there are the more upmarket restaurants, which tend to be out of the city centre in the Bole Road area. Most specialise in one type of European or Asian cuisine, and standards are fairly high. The final — and for a visitor by far the most interesting — type of restaurants are those serving traditional Ethiopian fare. If you’ve never slapped your lips around Ethiopian classics such as injera and wat (wat is a type of Ethiopian curry, which comes in numerous versions; injera, which perfectly complements the spice of wat, is a large, slightly sour pancake-like bread that you don’t just eat, but, in the absence of cutlery, you also use to pick the wat up with) then do not miss eating in a traditional Ethiopian restaurant. These can be pokey side-street places serving local workers, or far fancier tourist-orientated restaurants complete with ‘cultural’ dinner shows showcasing traditional dance and music.

Most smarter restaurants don’t include taxes and service charges on their menu prices. These can add up to an unexpected 25%.

How to Get There and Around 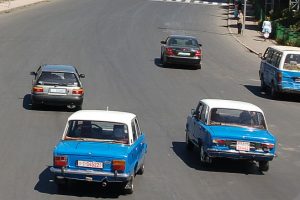 You can enter Ethiopia overland from both Kenya and Sudan, but the journey is long, hard and not completely safe. Therefore the vast majority of people get to Addis by air. Ethiopian Airlines, the only airline in the country, is one of the better African airlines with a modern fleet, good safety record and wide ranging network. Getting around the country is easiest by air, but as roads continue to improve bus and car travel becomes better and better.

Getting around Addis has traditionally been by either taxi or minibus. Taxis are cheap (a journey across the city centre in daylight hours won’t cost more than US$3) and easy to find. Minibuses serve set routes and run from dawn to around 9pm. Journeys cost less than US$.10. Minibuses can be found at almost every major junction. While finding a minibus is easy, finding out which one is heading your way is harder – ask a local, or listen for the driver’s assistant shouting the destination out the window.

For the past few years a major project has been underway in Addis to install Africa’s first ever light railway, due for completion by mid-2015.

Despite its size and chronic disparities between rich and poor, Addis is a fairly safe city where violent crime is rare. Pickpocketing and confidence tricks against foreigners are common, though. Be especially vigilant on public transport, the Piazaa area and Meskal Square areas, as well as around the Mercato, which has a terrible reputation for pickpockets.

Greetings: Shaking hands in Ethiopia can be a complicated business. Friends greet each other with what is called the ‘fighters salute’. Traditionally this was used between people who fought the Derg military dictatorship but today this complex weave of handshaking and shoulder bashing is used by everyone – but only between friends – do not use it at that important business meeting (use a normal handshake here). Friends, particularly women, greet each other with multiple kisses on the cheek. When entering a room it’s important to shake hands and greet everyone individually. 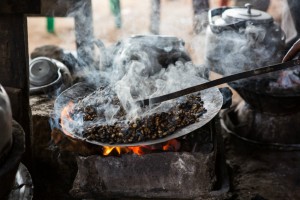 Tipping: Tipping is expected in fancier restaurants. Ten percent is normal. In bars and cafes some loose change is appreciated. At traditional dance shows (such as the cultural shows at some Ethiopian restaurants) people show their appreciation by placing (Birr10 is plenty) on the dancers forehead or in their belts. Tour company guides and drivers should be tipped around US$10 per day per person.

Coffee customs: When invited to a traditional Ethiopian coffee it’s considered polite to drink three glasses of the brain bendingly powerful stuff. And don’t be in a hurry. A proper ceremony takes at least an hour and a half.

Chat: If you see people with bulging hamster cheeks stuffing what appears to be random hedgerow leaves in their mouth then chances are you’re looking at a chat (qat, miraa) chewer. Endemic to the highlands of Ethiopia and Yemen, chat is a very mildly intoxicating leaf that when chewed gives the user a light buzz and, if devotees are to be believed, prevents tiredness and facilitates easy conversation. Most people who aren’t used to it find it very bitter, a bit of a hassle to chew and the effect almost unnoticeable. Legal, and an increasing problem in Ethiopia, it is illegal in many western and Middle Eastern countries and penalties if you’re caught with it can be severe.