Victoria Falls was first “discovered” by the Western world when explorer David Livingstone set his astonished eyes on the magnificent cascade in 1855. He was so impressed that he named it after his queen, even though it already had a local name, “Mosi-oa-Tunya” (“the smoke that thunders”).

Since then, Victoria Falls and the town that grew up around it has become one of the most-visited places in Africa, and a symbol of the power and majesty of the continent. Though it went through a period of decline during the worst years of the Mugabe regime, Vic Falls has bounced back with renewed vigor. Hotels are again operating at near capacity, restaurants are lively and crowded, and the adventure activities that the town made famous are running full throttle. It’s a town with much to offer the outdoor enthusiast.

Victoria Falls is located along the Zambezi river in the northwestern corner of Zimbabwe. It is less than 10 miles (16 km), from Livingstone, Zambia, which is just across the river. Many believe that the view of the falls is better from the Zimbabwe side.

Victoria Falls was designed specifically with tourists in mind. The compact town sits right next to the falls themselves (less than 2 miles/3.4km to the west), and most of the hotels, bars, restaurants, craft shops and the train station are found right downtown. The streets are safe and easy to walk during day. If you don’t want to walk, there’s a cute historic tram that plies a route between the train station and the bridge.

A couple of kilometers to the north of the town center is the golf course and the Zambezi cruise terminals, and the airport is about 13 mi (21km) to the south.

The falls themselves are one of the seven natural wonders of the world, whether you see them in wet or dry season (the water flow differs dramatically between the two). The Zambezi river, which is more than 2 km wide here, plunges down a series of basalt gorges, making a deafening roar and causing an iridescent mist that’s visible 20 km away. Though technically the falls are not the highest nor widest in the world, the combination of the two makes them the largest in the world. The maximum volume of the falls is 9,000 m³ (318,000 cu ft) per second.

You have to enter Victoria Falls National Park to see them, which carries an admission fee of US$30 (somewhat steep, though well worth the price). If you can time your visit during a full moon, all the better — there is a special nighttime admission (US$40) to the park on full moon evenings, when a lunar rainbow across the falls can be witnessed. It is an otherworldly experience that should not be missed. 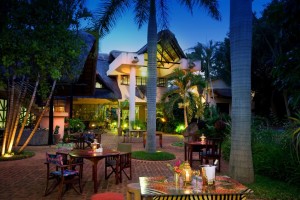 But Victoria Falls is more than just the waterfalls — there are quite a few things to do in the town itself, and further afield. It’s home to many notable boutiques and high-end shops, most of which are housed in the excellent Elephants Walk Shopping & Artist Village on the edge of downtown. It was created as a collective interested in promoting local artists, and today houses a mixture of galleries and individual stalls selling nearly every style and genre of Zimbabwean and African art imaginable, including a lot of incredibly creative designs.

Victoria Falls has a few excellent markets to check out. The Mukuni Village Craft Market is located opposite the entrance to Victoria Falls National Park, in the car park. It features dozens of stalls selling mostly stone and wood pieces — having the artist carve your name, the date and where you are into soapstone ashtrays or wall hangings is very popular. Victoria Falls Craft Market is located downtown on Adam Stander Drive. Here you’ll find a range of stalls inside a boxy complex, plus plenty of large sculptures and vendors with small stands spilling out onto the lawn fronting the road.

The most popular excursions from Victoria Falls are cruises and whitewater rafting on the Zambezi River (nearby), and game drives in Hwange National Park (about a 90-minute to two-hour drive away). 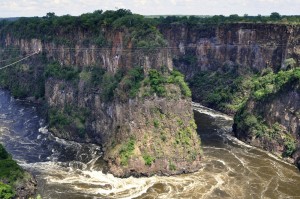 You can go on a full-day rafting trip down the Zambezi for a fairly reasonable price. But be warned: it is one of the world’s most gnarly stretches of commercially-run rapids — it has been called the top one-day whitewater trip on the planet. From put in to take out, the trip down Batoka Gorge provides an almost non-stop rip down 19 named Class IV and V rapids during low water (Jan-Mar) and nine during high water (Apr-Dec). To book a trip, Shearwater Adventures has been running the river longer than anyone, and has rave reviews; but Wild Horizons also offers trips, and may be a better choice if you want to combine rafting with another extreme sport, as they offer discounts for purchasing more than one adventure.

For a tamer experience, do a gentle sunset river cruise on a boat such as the Zambezi Explorer.

Hwange National Park is almost two hours away, but well worth it if you are already going to be in Victoria Falls. It’s also Zimbabwe’s largest national park and one of Africa’s “big 10” in terms of landmass, covering an enormous 14,651 square kilometers. Besides the massive elephant populations, keep an eye out for all the big cats — cheetah, lion, leopard — who all call this place home. The dry season, between July and October, is best for wildlife viewing as thirsty animals will travel long distances to reach the some 60 waterholes or “pans” (many of which are artificially filled by park officials) and the bush is dry and dead (making viewing easier).

After a hard day walking around the falls, around town, or out on a rafting adventure, you probably need something to fill your stomach up. Vic Falls isn’t a huge place by any means, but that doesn’t mean there isn’t delicious food around. 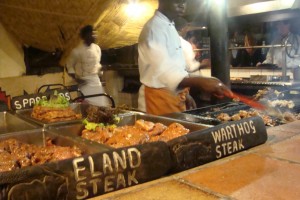 For massive quantities of delicious food, have dinner at Boma Restaurant, on the Victoria Falls Safari Lodge grounds about a mile from town. Entrance includes more than an all-you-can eat buffet featuring traditional Zimbabwean dishes and all sorts of game meat – from warthog to impala and kudu. It also offers a cultural experience with lessons in traditional drumming, colorful dance performances, and the chance to have your fortune told by a witch doctor between courses. Expect to spend about three hours here, making the $44 fixed price well worth it.

Lola’s Tapas and Bar in the middle of town also makes a great choice to spend some time and hang out over drinks. Sit outside at the checkered cloth tables and rehash the adventure over small plates of African and Latin-influenced dishes, though there are some other choices on the menu. Despite being a bar, it’s still a nice play for a family outing and the traditional music helps to remind you that you are in Zimbabwe.

If you’re looking for something closer to the falls, the Rainforest Cafe (not related to the giant chain) is located right at the entrance to the park. Part of the restaurant is open air and you can hear and feel the vibration of the falls from the restaurant. Portions are rather large, which helps if you are walking around the falls all day. Just don’t plan on going if you aren’t at the falls that day, you have to pay the entry fee first before dining. 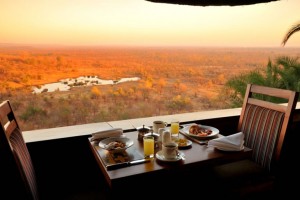 For something a little outside town (especially if you plan on going to Zambezi as well), Lokuthula Lodge makes a great option.  Just a five-minute drive from Victoria Falls town, Lokuthula’s thatched-roof, self-catering bungalows are a perfect fit for families or business incentive group retreats. Unlike most places in town, more than two guests can book into a bungalow here. They sit on well-maintained grounds where warthogs graze. Views include the unfenced Zambezi National Park and its semi-arid bush landscape of mopani (balsam tree) and baobab, lilies and Zimbabwe creepers.

And for five-star modern opulence and a chance of spotting game, check out Victoria Falls Safari Club.  The rooms and suites at the five-star Victoria Falls Safari Club are unique, ultra-modern affairs unlike anything else you’ll see in town. The inside has an open floor-plan style with a wall of sliding glass doors, which open onto a private balcony overlooking the bush.

By plane: South African Airways and British Airways both offer daily flights from Johannesburg to Victoria Falls, you can also fly in from several destinations in Zimbabwe or even from Kruger National Park.

By rail: The easiest way to get to Vic Falls is by overnight train from Bulawayo. You can also drive there from Bulawayo, but it isn’t advised unless you are fairly familiar with the country.

Victoria Falls is pretty small and easy to get around. If you are staying in downtown, you can walk just about anywhere you want to go, including to the falls, though some people like to get a cab  — most places you’d want to stay at are no more than 2-3 km(1-2 miles) from the falls. For the few places that aren’t, they usually have their own transfer services to get you there.

Most of Victoria Falls is safe these days and filled with tourists so you should have no problem getting around. At times, you can expect to be approached by enterprising, slightly annoying, but harmless youth trying to sell authentic money from the days when inflation was spiraling out of control in the country. When shopping in boutiques, expect prices to be fixed and bartering to be an insult, but at the markets, bartering is a must. Note: It is safe to wander the streets of Vic Falls by day, but at night it is less safe, because wild animals are known to roam the town.

Location: Victoria Falls is located in Matabeleland North province on the Zambezi River, on the western side of the falls.

Weather: The dry season gets pretty hot and runs through April-October. The weather is nice, but you might not see a high volume of water in the falls. The rainy season from December-March is in general the best time to see the falls.

Visas: All foreigners visiting Zimbabwe will need to acquire a visa, but these can generally be obtained at major borders and airports upon arrival.