The oldest solitary volcano in East Africa (that’s not part of a larger volcanic range), 4,321 meter-high Mount Elgon often gets overlooked on the regional adventure trail. But it has a lot going for it; gorgeous slopes carpeted in shimmering green flora, fantastic birdwatching and some spectacular waterfalls nearby. The Ugandan town of Mbale, close to the Kenyan border, is the gateway to Mount Elgon. Here’s our guide to making the most of a visit to Mbale and the mountain.

Getting there and getting around 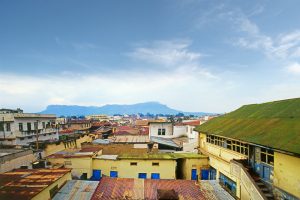 Mbale is easily accessible from Kampala and Jinja. If you’re driving from Kampala, count on around eight or nine hours’ driving time. It’s possible to reach Mbale by bus or matatu from both towns, although plan for delays; the traffic can get quite bad around Kampala during peak travel periods and rush hour. Mbale is also accessible from Kenya. The best route is via Nakuru and Eldoret; from Eldoret plan on at least three hours to the Ugandan border, from where you can find onward transport (one to two hours) to Mbale.

Mount Elgon is the eighth highest mountain in Africa. It stands at a height of 4,321 meters, and it’s more suitable for beginner climbers than most other African mountains that we can think of. As well as numerous waterfalls (the Sipi Falls are the most famous) within its reach, there are also warm springs close to the Suam River, a 2,500 meter bluff known as Endebess, and lots of unusually large caves. 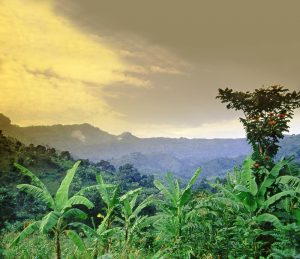 Kitum cave: If going caving with elephants is on your bucket list (of course it is), you’re in the right place. Kitum cave is lined with super salty walls, which attract elephants who come to lick sodium from its surfaces. The scars on the inner sides of the cave are the work of these great gray creatures. Other animals, including buffalo, antelope and hyena are also believed to come here for a salt fix. However, you might want to refrain from touching the walls; the cave is also notorious as a place where two visitors caught the deadly Marberg Virus (a haemmoragic fever similar to the Ebola virus) back in the 1980s. You can visit the cave from Mbale or Kitale. The entry fee is $25 per person.

Sipi Falls: Not just one waterfall but three, the Sipi Falls usually marks the beginning of a hike up Mount Elgon. On the edge of Mount Elgon National Park, these gorgeous chutes are well worth visiting. The longest drop is 100 meters. They are known for their lush vegetation and red stone backdrop. The falls are named for the medicinal Sep plant, which is part of the banana family, and grows on the banks of the Sipi river (fed by the falls). Coffee also grows around here, and you can join a tour of the plantations. You can drive out to the foot of the falls from Mbale, or visit as part of a tour group. Rob’s Rolling Rock (+256776963078) runs rock climbing and abseiling trips to the falls; transfers can be arranged from Mbale.

Climbing Mount Elgon: If you have your own transport or are using a taxi or private hire, you can easily reach Mount Elgon National Park from Mbale. It’s worth stopping over at the Ugandan Wildlife Authority office just outside the town to get word on the latest conditions and advice. Once you reach the gate, expect to pay $90 per person per day for entry into the national park. You’ll pay extra for overnighting (and by that we mean camping) on the slopes of the mountain; it usually works out at round 18,000 Ugandan shillings per night. It’s wise to ascend with a porter and guide; you should budget around 15,000 Ugandan shillings per day each for their services.

Climbing Mount Elgon might be easier than tackling the nearby mountains of Kilimanjaro or Mount Stanley, but it still requires a good level of physical fitness. There’s no technical climbing involved, but a fair bit of manoeuvering and scrambling. Climbs generally take three to four days, depending on the level of the group and weather conditions. It can get very rainy on the slopes, so come prepared with waterproof gear. Sipi River Lodge, located close to the falls of the same name, runs two to three night climbing expeditions, starting from a cost of around $540 per person and including all park and ranger fees.

Most routes begin at Budadiri and follow the Sasa trail to Wagagai Peak (the summit). You’ll pass the ominously named Wall of Death on the first day. It used to be climbed by robe but steps are now in place, yet the moniker remains. A campsite at Mude Caves is usually the overnight spot for the first leg. Most climbers are able to summit on the second day, checking out the spectacular caldera and lunar landscapes at the top of the mountain.

Mbale has a good range of sleeping options. Mbale Resort Hotel is by far the flashiest, and has some very comfortable doubles and suites on the edge of town. Mount Elgon Hotel is a decent mid-range option. Its rooms look out onto a garden area and are pleasant and furnished with all mod cons, although they can be a little noisy at night. If you prefer to stay in Sipi, close to the falls, Sipi River Lodge is a good base for excursions and has simple but romantic rooms and good home cooking.

In Mbale, both Mbale Resort Hotel and Mount Elgon Hotel have reasonable restaurants. Otherwise you can head over to Almaz on Gangama Road for pumpkin stew and pizzas, or try Nurali Café on Cathedral Avenue, for Indian food. Mbale also has several small supermarkets, and a good fruit and vegetable market, for those who want to pick up supplies in town before heading to Mount Elgon National Park or Sipi Falls.