Green and pleasant Kampala is famous for its garden restaurants. You’ll find them all over town, nestled between the hills and turning out delicious food in lovely, lush settings. But there’s far more to the Ugandan capital than green cuisine; it would be a shame to make it here and not try some Ugandan street food and other local specialties. Here’s our guide to dining out in Kampala, from matooke to masala.

A typical Ugandan lunch or dinner is made up of two dishes; a stew or a soup, accompanied by carbohydrates. If you’re invited to eat at someone’s house, you’ll likely be served a meal in this way. Street food more commonly consists of one bowl, often comprising a stew and a starch together. Some of the things you can expect to find on the menu include:

Matooke: Describing matooke as a dish made from boiled and mashed bananas doesn’t really do it justice. Uganda grows dozens of different types of bananas, from chubby baby ones to long green specimens that more closely resemble plantain. Matooke is made from the latter, and is either steamed in its own leaves or boiled, and then mashed. It’s eaten hot. Matooke is among the most expensive Ugandan specialties. 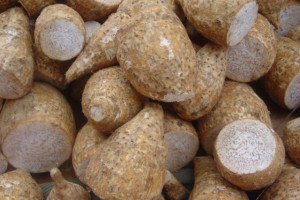 Posho: This is a type of savory porridge, made by mixing cornflour with boiling water until it turns into a thick paste. Its taste is fairly neutral, somewhat like rice, making it a good filler food and a nice accompaniment to a flavorsome soup or stew. Most Ugandan kids grow up eating posho; it’s cheap and simple to prepare and it keeps kids’ stomachs full. It’s also sometimes known as ugali in Uganda.

Cassava: This good old African staple is prized from Cameroon to the Democratic Republic of Congo, and Uganda is no exception to the craze for cassava. In this part of Africa it’s usually boiled and thinly fried; some people like to eat it with soup or beans. Cassava holds little nutritional value, yet it must always be cooked properly. If prepared incorrectly, it can produce cyanide. Some say that people with a latex rubber allergy are more susceptible to the negative properties of cassava. Uganda has been eating cassava for centuries and most cooking methods are thorough.

Sugar and spice and all things nice

A craze for bakeries is sweeping through Kampala, perhaps inspired by neighboring Rwanda, Burundi and the Democratic Republic of Congo, all of which have been influenced by the patisseries of the francophone world.

Try the appropriately-named La Patisserie in the new shiny Acacia Mall in Kololo, where you can pick up all sorts of sugary pastries, as well as coffee and gelato. On the other side of the same mall, Cafesserie sells delicious hot buns, blueberry cheesecake and chocolate creations. There’s a nice terrace, where you can while away the afternoon with a coffee and a magazine from the rack of glossies inside the café. Directly opposite is Milestones, which sells cinnamon swirls, skinny baguettes, coffee and books. Or you could head to Bean Café on Gbagba Road in Kansanga, where the sandwiches are purported to be the best in town.

An Indian dish at Haandi

With a sizeable Indian population, it’s no wonder that Kampala has some fantastic Indian restaurants. It would almost be rude to pass through here without chowing down on some chapati (soft Indian bread) or some chicken tikka masala. Khana Khazana in the Kololo neighborhood of the city is consistently rated as one of the best – and most atmospheric – Indian restaurants in town. Tables are spread throughout a quintessential Ugandan garden, and the waiting staff wear traditional Indian outfits. It makes a great spot for a special date night or a business dinner. Haandi (7 Kampala Road) focuses more on the food than on the surroundings, but it’s a hit with the Indian community, which is always a good sign. Ashiani in the Bugolobi area is a cheaper option, and we hear good things from its regular customers.