Think Mozambique is all about beaches and giant shrimp? Think again. From hidden cafes founded by revolutionary guerrilla fighters, to the peeling paint of party venues housed in old movie theaters, to secluded beaches laced with starfish, Mozambique is teeming with secret gems. Here are our top six favorites. 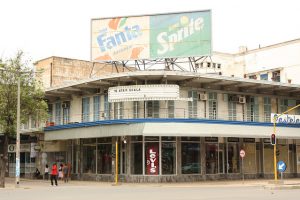 Scala is Maputo’s most bohemian movie theater, which showed films to the public before the war of independence from Portugal. It was named after Milan’s famous Teatro alla Scala, and has an exquisite balcony to match. These days, Bollywood and Nollywood (Nigerian films) grace its twin cinemas, with occasional music performances, too. Best of all, there’s often a rooftop party on weekend nights with regional DJs. We can’t whisper to you when the next one is (that’d be telling) but the Maputo grapevine usually delivers.

The nursery of dreams

Half a century ago, when Mozambique was engaged in a bitter war of independence again Portugal, one woman had a dream. One day she would leave the fighters’ camp deep in the Mozambican forest where she was stationed, and open a greenhouse nursery selling plants and great coffee. Amazingly, she did just that, and the place is still there, at the edge of the FRELIMO ruling party headquarters in Maputo’s plush Sommershield neighborhood. While you can’t buy plants anymore, you can buy coffee, as well as lunch and curious tea concoctions created from bush leaves. Find A Esquina — which means “the nursery” in Portuguese — hidden behind Soul Gourmet restaurant, close to the Clinica da Sommershield.

Mafalala, known as Mozambique’s Soweto, is probably the Maputo barrio (neighborhood) with the richest and most colorful history, spread out on the outskirts of the capital. Its brightly-painted houses have birthed some of Mozambique’s most famous artists, writers and sporting heroes. Their bright colors are a nod to financial freedom: historically, black Mozambican renters in the immediate post-colonial period were unable to decorate their houses as they wished under a system similar to South Africa’s apartheid, and had to stick to the landlord’s drab gray peeling paint. Homeowners later began splashing their houses with pink, blue and yellow. The wonderful Jane Flood, a knowledgeable British expat in Maputo, runs walking tours of Mafalala, as does the Associacao IVERCA. 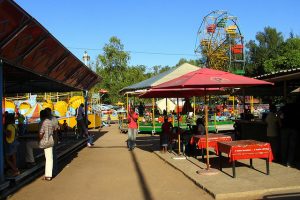 Maputo’s Feira Popular (Avenida 25 De Setembro) is that rare thing; an old-fashioned fairground that still works. Head down here on weekend afternoons to spot kids shrieking with delight on the dodgems, or to rise up to the top of the (small) ferris wheel as the sun goes down. It’s not bad for adults, too; if you sneak behind the back of the main area, you’ll find the delightfully hip O Coqueiro, an old-school local restaurant that specializes in ultra-cheap dishes and beers from Mozambique’s Zambezi region. Think fried fish, feijoada bean stew and a whole lot of spice. If the night doesn’t want to end, Face2Face nightclub is on the other side of the fairground and is a little seedy but good fun. 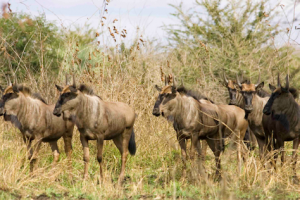 Gorongosa, in central Mozambique close to the border with Zimbabwe, was once southern Africa’s most spectacular national park. It was home to around 200 lions, several herds of elephants, as well as buffalo, rhino and hippos. Sadly, the war – and, later, poachers – tore the park apart, and it wasn’t until American philanthropist Greg Carr fell in love with it that its future began to be rewritten. Carr has injected funding into the park, managing it in conjunction with the Mozambican government, and 2014 saw the opening of the E.O Wilson biodiversity center, named for the famous American biologist. Lion numbers are on the rise, and community engagement programs are bringing surrounding villages together. You can visit Gorongosa during the May to December dry season; see www.gorongosa.org for details. Note that the security situation in Sofala, where the park is situated, is subject to change. Park staff can advise you before you travel.

With 2014’s security issues on the Kenyan coast, everyone’s flocking to Tanzania. Zanzibar, we hear, is getting booked up fast, and Kenya’s Lamu island isn’t seeing many tourists. But that doesn’t mean you need to say goodbye to dreams of a quaint Indian Ocean island getaway. Ilha de Mozambique, in the northern part of the country, sees fewer tourists than Zanzibar and Lamu, but has just as many draws, including the oldest intact European building in the southern hemisphere. The island is a UNESCO World Heritage site, and is lined with crumbling colonial-era buildings awash with pinks and yellows, and studded with skinny palm trees. The beauty of the wooden Indian motifs and the taste of fresh lobster and shrimp seal the deal.