“Fifty-five years ago, Ladysmith Black Mambazo was born, in the spirit of freedom and unity,” boomed Thamsanqa Shabalala of the legendary South African acoustic chorus.

We were at Bushfire, Swaziland’s annual music and arts festival, held at House on Fire, a venue on the edge of the mountains in the Ezulwini valley, just outside Swaziland’s capital Mbabane. Ladysmith Black Mambazo’s performance was the headlining act in a line-up that in 2014 included artists from South Africa, Mozambique, Zimbabwe, Colombia and the United States, as well as Swaziland. 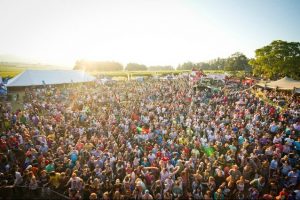 The crowd at Bushfire

They included Zimbabwe’s legendary Oliver Mtukudzi, South Africa’s Eppelsauce and Swaziland’s Floewe, with her soulful vocals that ricocheted throughout the festival ground. But there’s no doubt that Ladysmith Black Mambazo was the star of the show. The a capella men’s choral group that rose to fame during apartheid-era South Africa has won four Grammy awards and outside of their native South Africa, is perhaps best known for having toured with greats such as Hugh Masekela and Paul Simon and sung on the latter’s  world renowned Graceland album.

As they sung famous tracks such as Wangibambezela — which translates to ‘message from his heart’ — the audience watched, enchanted. A mixed crowd filled the festival ground; children danced as the sun beat down, Swazi cultural singers dressed in traditional garb put down their drums and joined the crowd, and men waved flags and t-shirts bearing the name of the group. The same patch of land that the night before was filled with groups of friends dancing to hip hop, was cloaked in silence as Ladysmith Black Mambazo sang on.

While other music festivals target specific audiences or channel a more specific vibe, the great thing about Bushfire is that it attracts a mixed, mellow crowd. It first began as a small, niche festival designed to showcase the best in Swazi art and music, under the banner ‘Bring your fire!’. It has since expanded, winning sponsorship by the MTN cellphone network, and reflecting the voices of artists from all over southern Africa, as well as further afield. Past acts have included Saul Williams and South Africa’s Nakhane Toure. Held at House on Fire amphitheater, which backs onto the Mlilwane Wildlife Sanctuary, the setting is breathtaking, framed by misty mountains and vast fields of green. And although the festival has been compromised by the threat of protests in recent years, particularly relating to limited freedom of speech in Swaziland, the message this year was clear: music is a uniting force for good. 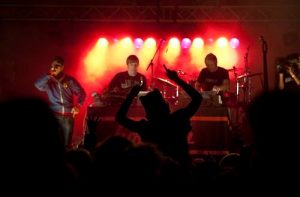 Bushfire is as much a feast for the tastebuds as for the ears. This year the main festival ground included food stalls selling dishes and snacks from South Africa, Kenya, Mexico and England, as well as from Swaziland. We snacked on nyama choma – Kenya’s unofficial national dish, or ‘barbecued meat’ in kiSwahili – and Mexican tacos, as well as pork and ale sausages served London-style. The VIP arena snaked around House of Fire restaurant, where the menu included South Africa’s famous oxtail stew, mango salads and pumpkin soup; perfect for the cold Swazi winter weather.

In the handicrafts arena, positioned at the back of the festival ground, we browsed stalls selling everything from Swazi hot sauce to the stunning place mats created by Gone Rural, an initiative that works with more than 750  rural Swazi women. Quazi Design’s stall sold one-off pieces of jewelry fashioned from discarded newspaper, including unique earrings and long necklaces combining local fabric with flashes of gold. In the nearby barn, art was for sale and Zambezi News – a satirical take on Zimbabwean news broadcasts – played to an enthusiastic crowd. 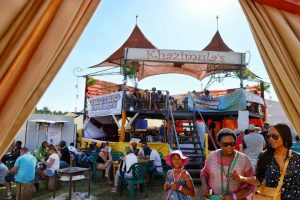 Although Malandela’s, the excellent bed and breakfast next door to House on Fire has several beautiful rooms, it closes during the Bushfire festival each year. We opted to stay at Mlilwane Wildlife Sanctuary a short drive away, where warthogs snooze by the open fire and huts or beehive houses cost from 1910 South African rand per night. Camping is also available at the same site from 900 Rand per tent per night. With rolling hills and zebra grazing between the valleys, it’s a stunning site, and with the exception of shy hippos and crocodiles, it’s blissfully free of big predators, making it a great spot to walk, hike or cycle in the early morning.

2014’s closing act was Oliver Mtukudzi, whose lyrics in Zimbabwe’s Shona language don’t shy away from social issues such as HIV/AIDS (Swaziland has the world’s highest prevalence of HIV). With his rich deep voice and uplifting tracks such as ‘Todii’ and ‘Neria’, Tuku – as he is affectionately referred to in Zimbabwe – assured the crowd dispersed on a sweet note

MTN Bushfire takes place from 27-29 May 2016, spanning three days over a weekend. Tickets start at R185 for day passes for children, rising to R718 for full-weekend passes for adults.

Most festival-goers travel from Swaziland or South Africa. From Johannesburg, it’s an easy four- or five-hour drive, although the border can become clogged with traffic ahead of the festival. From Maputo in Mozambique, count on four hours’ travel time.

Malandela’s and House on Fire, where Bushfire is held, closes to regular guests at this time of year. Accommodation options include the nearby Mlilwane Wildlife Sanctuary or guesthouses and hotels such as Mantenga Lodge and Brookside Lodge.