When heading to East Africa on safari, the question on most people’s lips is “will I see the wildebeest migration?” Considering that two million mammals can’t suddenly vanish, the answer is “yes, it’s highly likely.”

And once you do finally see the Great Migration, it’s an experience that will never be forgotten. Even wildlife documentarians struggle to make it look believable: as wildebeest, zebras and other ungulates traipse back and forth across the Serengeti and the Maasai Mara, the grass disappears beneath a carpet of marauding hoofs and stealthy paws. Cameras pan out to reveal massive herds of creatures seemingly moving as one, while close-ups show lion prides at the edges of the pack salivating at the dinner menu, while crocodiles maul zebras with ferocious abandon. The Lion King seems less fictional, even if it features a hyena that sounds like Whoopi Goldberg.

The trick to witnessing the Great Migration is to visit the right place at the right time. The animals don’t follow a rigid calendar. Their journey is dictated by rain, something that has become less predictable in recent years. But they traverse the same route on their annual journey, so their approximate whereabouts are well known — which is very benevolent of them if you’re going on safari, but rather unfortunate for them considering the number of prowling predators. 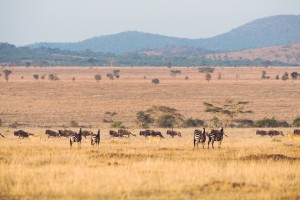 Best for: Budget and shorter safaris, herds covering the plains.

The migration starts (or ends) with calving. Immense herds cover the lush short grasses of the southern Serengeti, dotting it black and offering a surreal panorama. Zebra and wildebeest stretch as far as the eye can see; giving birth, trying to get fat, and attempting to avoid being the smorgasbord of predators. This is arguably the best time of year for anyone with limited time or money. The southern plains are the closest point to Arusha and the rest of the Northern Safari Circuit. You can come for 24 hours and enjoy the spectacle, including excellent opportunities to spot the big cats out on a hunt. Once the wildebeest start moving, you’ll have to cross the Serengeti in order to reach them, and the extra days of park fees really add up. The accessibility of the Southern Plains means that it does get crowded with safari trucks, however, with so many mammals you’ll still enjoy an intimate experience.

Best for: Immersion in the migration, moving herds

You might be disappointed to learn that the wildebeest don’t all move as one. As they calve, they gradually spread west, before early runners lead the charge north in April. Hectic scenes follow, a thundering succession of hoofs heads towards the Serengeti’s Western Corridor, forming larger and larger herds. They bunch up and cross the Grumeti River around July, before spreading into the Northern Serengeti. The Western Corridor offers the best place to watch the wildebeest migrating, and this time of year is all about multi-day adventures. There’s an immense area to explore, and you’ll see traveling herds from your camp or lodge. Don’t try to rush the experience. Go for at least three days, because immersing yourself in this untamed world makes it seem even more fictional. 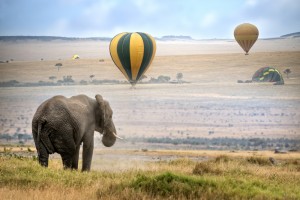 With the grassland wilting, the herds spread, many of them crossing into Kenya’s Maasai Mara. In truth, as the wildebeest disperse, the migration can be spotted in Kenya from June to mid-November. But the most spectacular time is the Mara River crossing around September. Herds pile up beside the effusive water, sometimes spending days to build up the courage to cross. Then they charge in panicked unison, the sick and the lame picked off by Nile crocodiles. The big cats also profit from the confusion on both sides of the river, but don’t expect to have a dramatic river scene all to yourself. Consider a safari that visits both Northern Serengeti and the Maasai Mara as it’s fascinating to see the subtle changes between the two sides of the river.

November – December – Eastern Serengeti, Loliondo, and Back to the Southern Plains

In essence, the wildebeest migrate twice, first heading north and following the fertility of the plains, before returning south to their calving grounds. They’re severely depleted at this time as they roam across a huge area of Eastern Serengeti and Loliondo Game Controlled Area, making it an opportune time to avoid tourists. Again, these months are approximate, and the ungulate herds will start their journeys at different times. Loliondo is adjacent to the Serengeti and offers a more off-beat and unique safari experience. There are less restrictions, so come here to observe the migration on foot, take a thrilling night time safari, and witness everything from an almost intimidating proximity. You won’t see the same giant herds, but the freedom to stay out past sundown and walk with local Maasai guides more than compensates.